The Neroche Scheme has commissioned a diverse range of artists to make work in relation to the Neroche landscape - sculpture, storytelling, music, public art, websites and blogs, wood carving and visual art are all part of what is being produced over the coming months, to reveal some of the wonderful places and hidden secrets of the Neroche area.

Michael Fairfax was the lead artist on the Blackdown Hills Neroche Landscape Project hosted by the Forestry Commission. He helped to formulate a Creative Arts Strategy. He looked at ways of utilising the materials from the deforestation programme, and how artists can record the changes occuring on the Blackdown Hills over the next twenty five years. He is also, with the assistance of Graphic Artist Dane Watkins creating a pilot scheme for the use of PDA’s (Personal Digital Assistant) for the interpretation of Quants on the Blackdown Hills. Michael held workshops at Castle Neroche and Blackdown common during 2006 creating artworks with the materials around him. Chert, gorse, bracken, twigs, sand and the roots of an ash tree. As well as photographing, spiders webs, insects, flora and fauna and a number of timelapse films.

‘As lead artist on the Blackdown Hills ridge route project I have to instigate a number of workshops for the public. During my time on the Blackdowns I have learnt many things about the project and a number of the developments have enthused me. I am bowled over by the deforestation and coppicing plans The Forestry Commission has for the next twenty years. This should see the Blackdowns restored to the Woodland pastures, and woods of old, predominately the deciduous woods we all know and love with a removal of a lot, but not all of the conifers planted after the war’.

More about the Revealing the Landscape, please visit www.nerochescheme.org/art.php 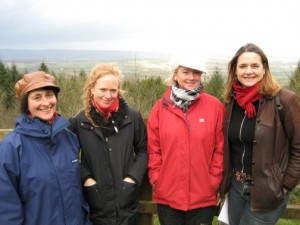 Countryside organisations are not always particularly inspired in the way they try and convey facts about the landscape. Despite the breathtaking beauty of the features they describe, the signboards and information panels at the entrances to some sites can be a bit of a turn off, with graffiti and cigarette burns over fading print, and their very presence can sometimes detract from the wild experience of these places. Partly for this reason, the Neroche Scheme is deliberately not intending to follow the information panel approach. There is plenty of exciting information to convey, but we need a more appropriate and inspiring means of putting it across.

The Neroche ‘Revealing the Landscape’ project has been supported bySomerset Art Works and part funded by Arts Council England.

Revealing the Landscape is funded by Arts Council England as part of theNeroche Landscape Partnership Scheme led by the Forestry Commission.

That’s where the arts come in. We are not talking about permanent installations – which would risk suburbanising the landscape as much as signboards do – but visual arts, music and storytelling which reveals the natural and cultural heritage of the Blackdown Hills landscape with a light touch, producing interventions which are transient, and which involve the community in their creation. The Blackdown Hills are blessed with an active and hugely creative arts community, who interpret the landscape through their own varied work, from painting to sculpture and ceramics. Neroche can add to the achievements of projects like New Eyes by using that visual language – together with music and the spoken word – to bring the heritage of the area to life. Our lead artist, Michael Fairfax, built on his previous work by inviting the public to join him at a variety of locations across the Neroche area, through the seasons, to explore the landscape and see how we can interpret it using natural materials.

Information on the move

There are times when, deep in the forest or amongst the fields, many of us would like to be able to access information about what we are seeing – how to identify a butterfly, or learn a little more about an old building – but without having to cart reference books and leaflets about with us. TheNeroche Scheme is pursuing a solution to this, using digital technology. We will distil the knowledge and perspective of local naturalists, historians and artists into a form which can be made available using innovative hand-held mini-computers, or PDAs. These can offer a depth of information about the area without imposing the provision of that information on the landscape itself. It is hoped that these mobile devices can be made available for hire through local shops, pubs and post offices. Their development is led by the Neroche Lead Artist, Michael Fairfax, and graphic designer Dane Watkins.

In November’ 08 Jane and Fiona returned to the four schools they had visited earlier in the year and prepared and rehearsed a piece for each school to present on Punkie Night. This involved 200 children and their teachers.

Sally Clark, artists coordinator, went into the four schools and made lanterns with all key stage 2 children and left materials for key stage 1 children to make jam jar lanterns. This involved 200 children. The lanterns and the performances encouraged the children and their families to attend the event.

Punkie Night was a huge success with 250 to 300 participants. Most participants carried a colourful lantern in a big procession following a carefully way marked and partially lit track through the historic Castle Neroche forests. The procession started at 5.00 pm as darkness was descending on Saturday 15th Nov and was approximately one mile in length.  A wonderful centrepiece of candle lit willow sculptures created a magical scene for the schools performances. Also there was an array of woody characters performing along the path such as fairies, witches, a Holly King and Queen, tree elves all lit by candle light. At the top of the forest there was a wishing fire where there was a ‘burning of wishes’ ceremony. A local farm shop supplied hot soup and hot dogs.

Jane and Fiona have recorded their stories and songs onto a CD as an archive for the project.

Jane Mowat – (visual artist) set about carving her large fallen oak during October. She also started work on a found piece of oak from the site, which is now finished.

After working for a short while on the oak she made the decision to stop because she felt that the shallow carving on the trunk would have only a short life before it rotted. It was thought better to take a deep slice along the tree.  She  met with a contractor in mid January 09 to arrange the slicing work to the timber. She has resumed her work.

From the Media link on the Transience menu bar, there are direct links from many of the 24 media files to the relevant posts on the blog, which detail the context and making of that particular video or image.

Megan Calver – (Placement Artist) spent a day with each artist but found a real connection with Sue Palmer with whom she spent over 3 days. Much discussion of art and its place in this project took place by email between them. Megan has produced a number of pieces of conceptual work based on the Neroche landscape.

‘The placement has provided the time and opportunity for dialogue and reflection around how art might be successful, especially in relation to funding (value for money) and in terms of aspirations within, or for, a community.  Witnessing and considering the work of all the professionals involved, and discussions with Sue in particular, has developed thoughtfulness on these issues that previously I had not had to consider in actuality’.