At Harvest festival, I was invited by Somerset Art Works to an evening of feasting held at the historic Tithe barn at the Somerset Rural Life Museum. The evening marked the residency of ceramic artist Emilie Taylor and her new collection of work on show at the Museum. The space we entered seeped with age old stories and lined with beautifully adorned, candle lit tables. Sixty of us sat down to eat bowls of warming food, served in hand-made ceramics. As the wine flowed, the conversation drifted to more uncomfortable territories: land ownership, inequality and food poverty. 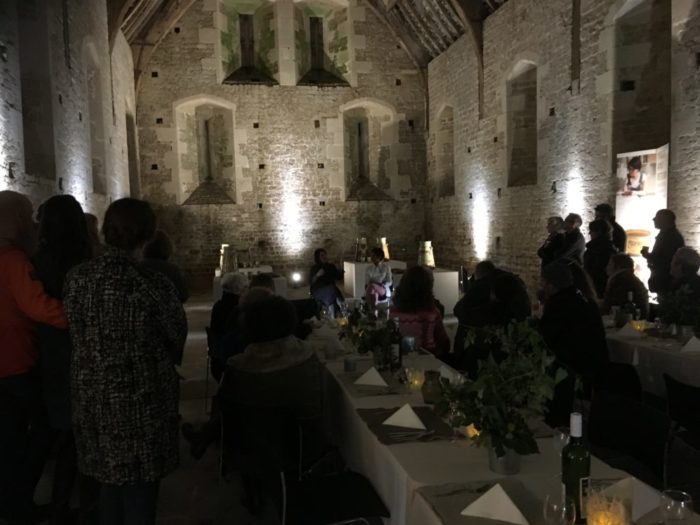 During her residency, Emilie read a UN report that compared government Welfare Policies to the creation of workhouses. The report stated that, unless austerity came to an end, Britain’s poorest people faced lives that were ‘solitary, poor, nasty, brutish and short’. Research into the social and political histories of Glastonbury and Bridgwater highlighted that they are amongst the poorest towns in Somerset, with one in four children living in poverty. Her new collection of slipware cleverly draws on this research, as well as her experiences with a circle dancing group, an artisan bakery, the local food bank and a lunch that had been organised for the homeless. She has also explored the history of local rural ceramics including the Rural Life Museums’ collection of historic Donyatt Pottery. 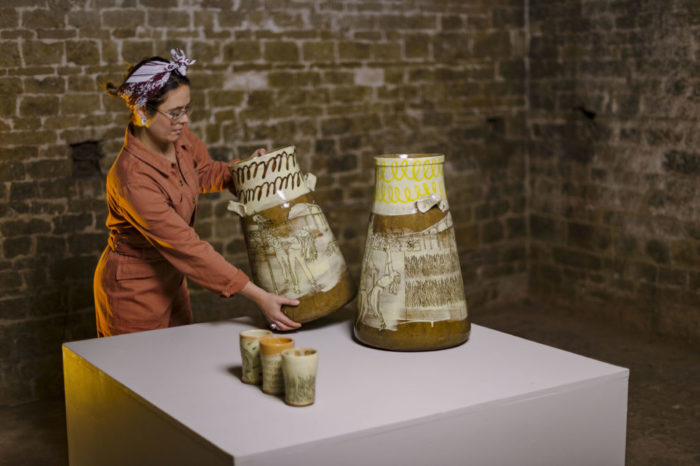 As an art psychotherapist, it comes as no surprise that the work Emilie made during her residency, has articulated the voices of Somerset’s young people in a powerful display of traditional slipware. As well as her own collection, Emilie produced a moving body of work with local school children. Vessels inscribed with text stating “Don’t feel scared to ask for help, we’re all human” and “No one has ever become poor from giving” show admirable skill and aesthetic awareness. They also bring our attention to current issues: the state of food production and the stark reality of food poverty. The vessel or container is a metaphor for how we seek to contain communities, and community rituals, within British society.

To Emilie, the idea of a shared experience over food, a gathering together within a community, was an important part of her residency in Somerset and a deliberate nod to times past. It was an idea that offered important opportunities to discuss the wider themes behind the work in an immersive and congregational style. 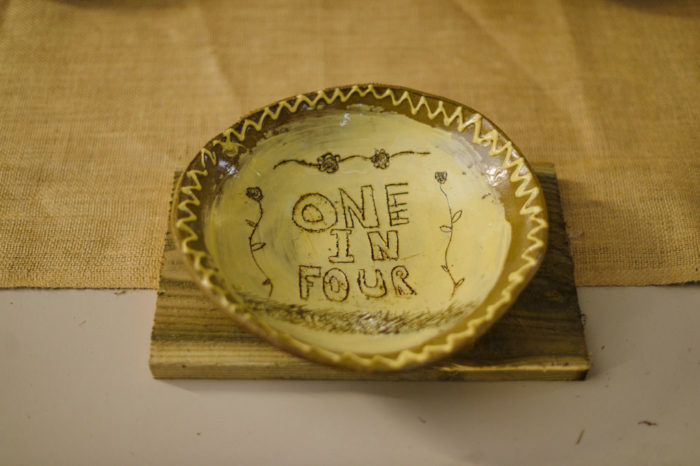 Listening to the discussion before dinner I was fascinated to hear of Emilies’ previous role as a drugs and alcohol worker. She talked eloquently of the time she spent working with vulnerable and damaged people, drawing resemblances from these themes in her ceramics work. In both alcohol recovery and the making process of ceramics there is a tangible process of change. The process of change towards recovery and the altered state of clay to a fired piece, is an ongoing interest for Emilie that is an alchemically potent process and symbolic of  transformation.

It’s not very often you see political pottery encrypted with powerful messages of poverty, austerity and food banks and it’s an experience that has left it’s mark.