Since 2003 Mill Marsh Park in Bovey Tracey has been the location for one of the most loved contemporary craft events. During that time, it has consistently maintained its high standard, showcasing a selection of the UK’s most prestigious makers. The weekend attracts over 10,000 visitors, many of whom have loyally attended from the very beginning – they come to buy, participate in workshops and soak up the relaxed and inspiring atmosphere.

This year Somerset Art Works decided that it was high time to participate as an exhibitor, many of our members have individually showcased their work in the past, but as 2019 is SAW’s 25th Anniversary it was felt that the silver celebrations should be promoted further afield, to a new audience and The Craft Festival was the perfect match.

Throughout the weekend the SAW stand offered a series of relaxed drop in workshops and demonstrations by a selection of its members, who had also been commissioned to create a piece to celebrate the silver anniversary. Six domes, displayed six delicate individual pieces that represented the varied craft skills practiced within the county. There was a felt flower corsage by Liz Clay, heavily brocaded fabric scissors by Rebecca Bruton, a petite knitted jumper by Ria Burns and Jan Ollis had crocheted a bouquet of roses. 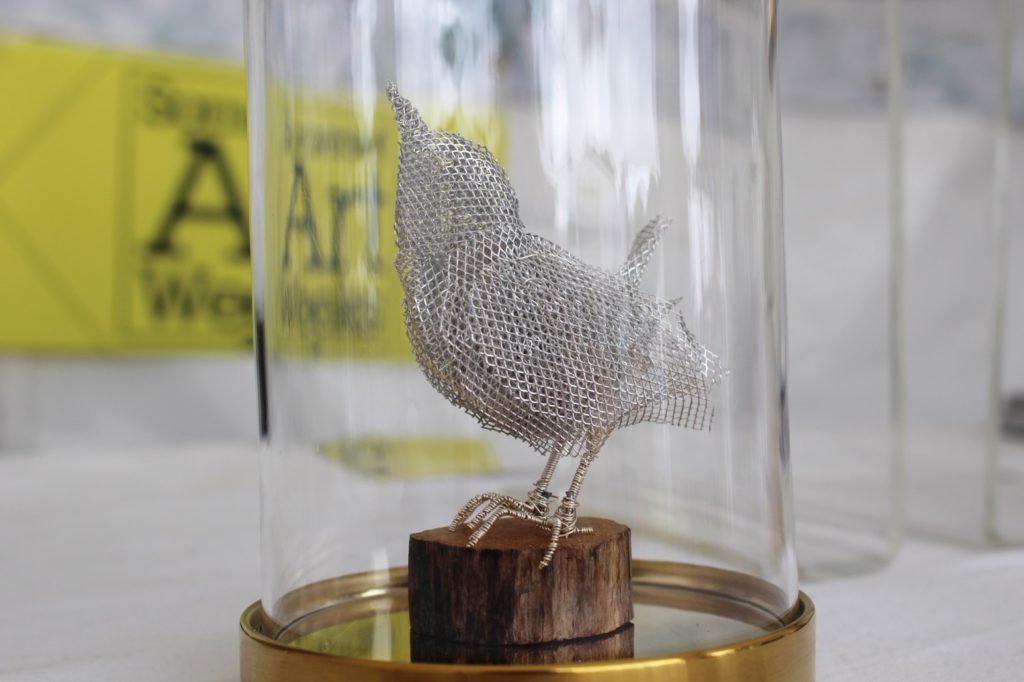 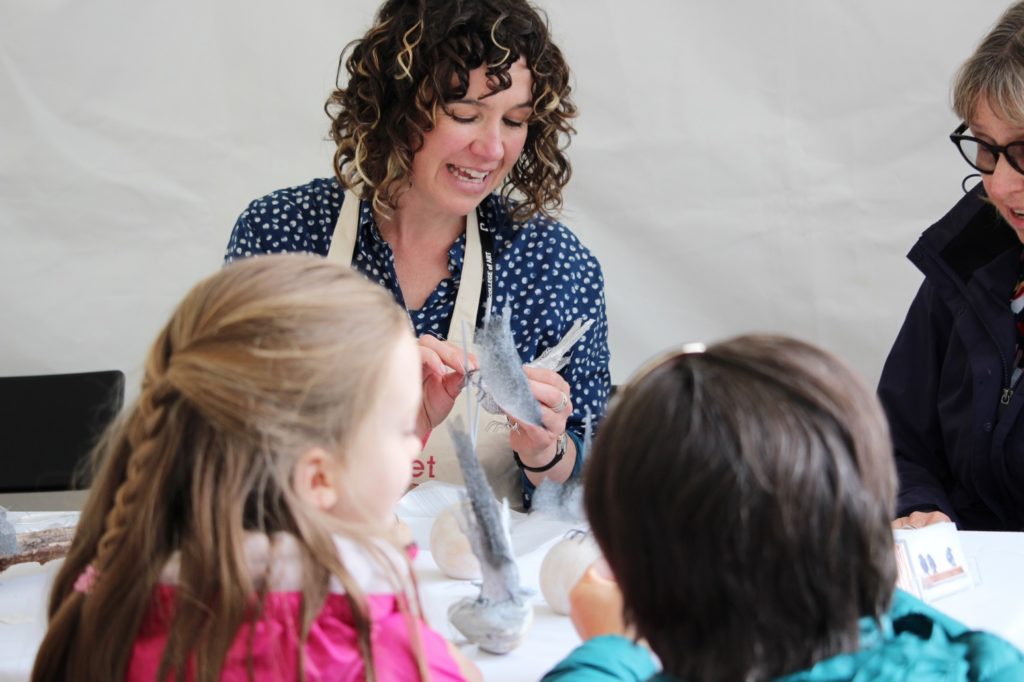 The day I volunteered as a host on the SAW stand, I was joined by SAW’s creative director Carol Carey and artists Lucy Large and Jessica Palmer. For her dome, Lucy had made a beautiful little wren from fine aluminium mesh, sewn together with silver wire and her workshop demonstrated how to make a similar little bird. Due to the nature of the material, the mesh can be sharp, so the morning workshop was aimed at an adult audience although under guidance older children were able to participate. Working with wire in such an unexpected way, Lucy plies it like fabric, proved very alluring to many that stopped by. One participant who explained to me that she just couldn’t bear to spend the evenings watching television, but just had to be creative went away with an impromptu kit to continue making on her return home. Another participant who specialised in making incredibly fine ceramic flowers shared her knowledge of making petals and leaves, inspiring one young girl to make a flower, which for me highlighted the relaxed nature of the workshop chat and skill sharing atmosphere of the festival. The heavy rain showers meant visitors were less inclined to wander at leisure and those absorbed in making were happy to be entertained while remaining dry – at one point there was a very focused, content atmosphere on the SAW stand, people ‘made’ while dogs slept under the table. 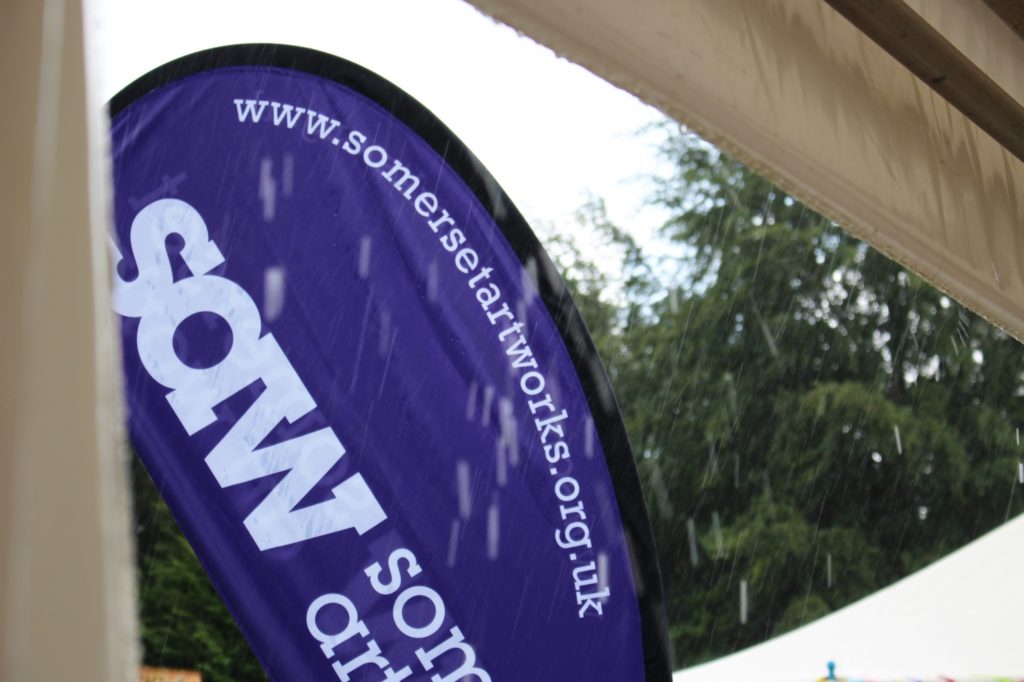 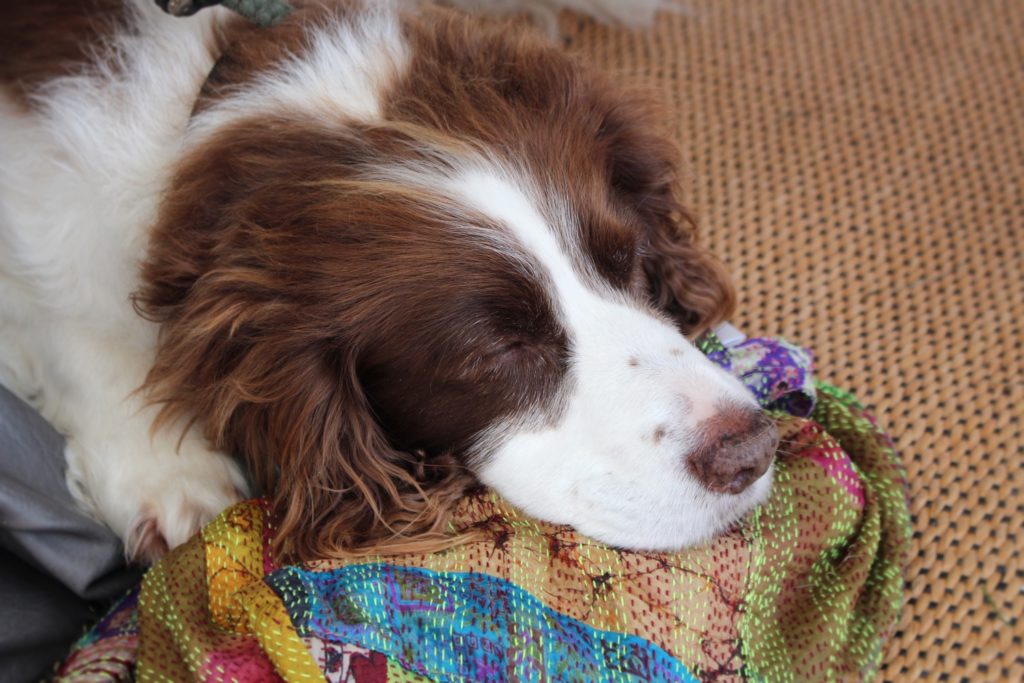 The afternoon continued with a bird theme as artist Jessica Palmer demonstrated the paper making skills she had used to create her silver heron, which was much admired throughout the weekend. In fact, all the domes created a great deal of attention and once people learned that they could possibly win one in our September raffle draw they were keen to buy tickets to enter. More details of how you can enter will be released soon. 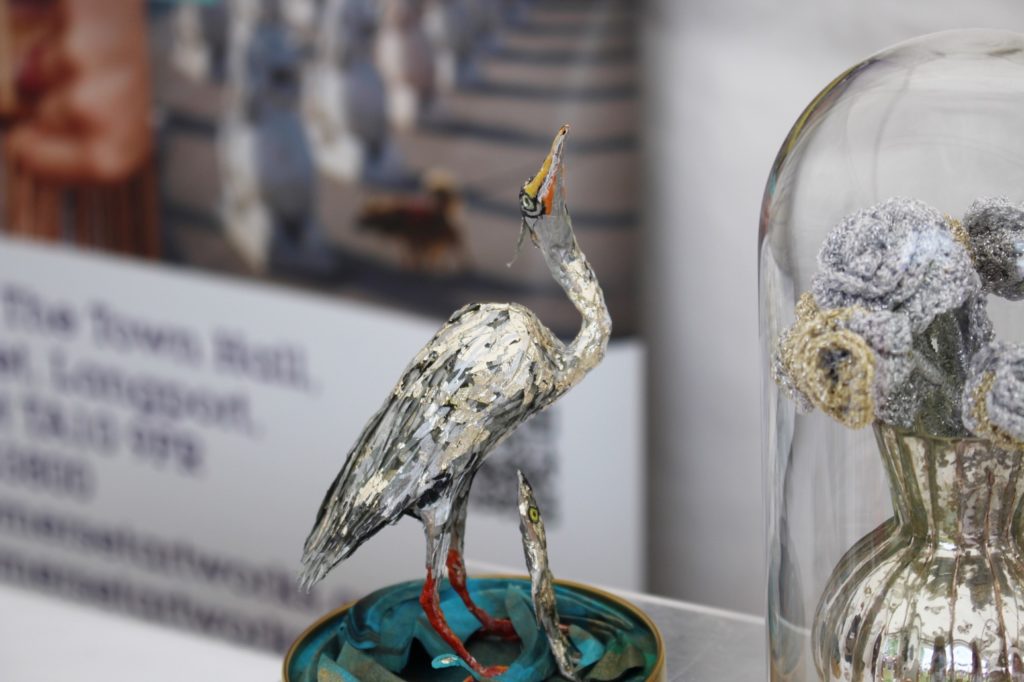 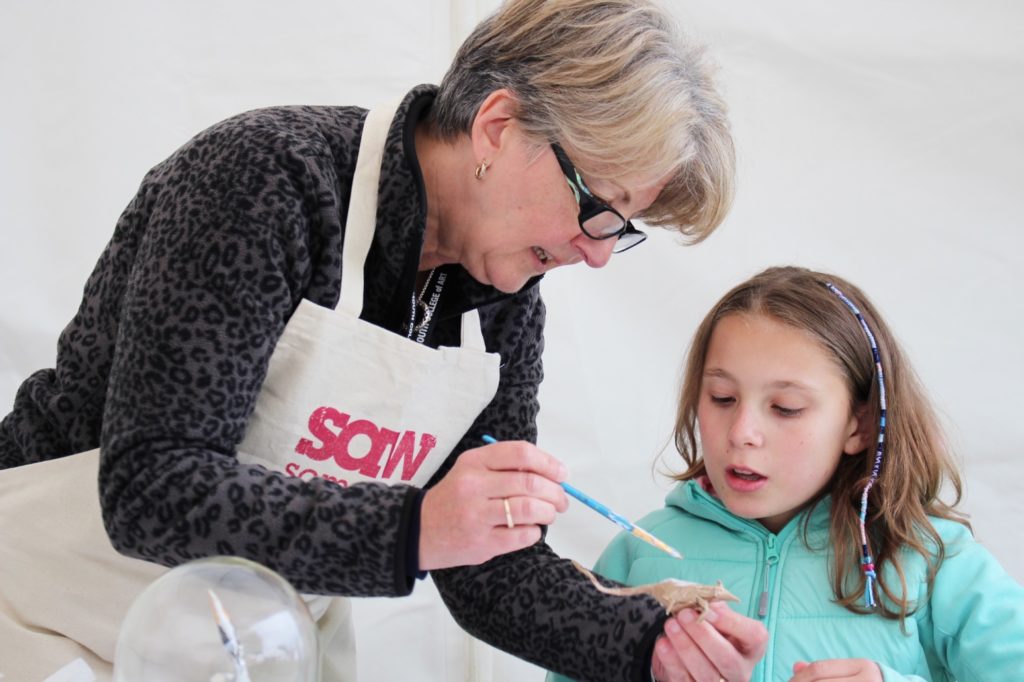 I got to chat with many passers-by, a handful were familiar with SAW, particularly the Open Studios format but it was encouraging to meet so many who were unaware of Somerset Art Works and were keen to seek out and visit during our anniversary year. It was also a great opportunity to inform the public about the educational and community projects that SAW conducts throughout the year, highlighting that the organisation is proactive for 52 weeks of the year not just 2! I also met with artists who were considering joining and it is always rewarding to encourage new members to join Somerset’s creative community and the professional support SAW can offer.

My time at the Craft Festival was thoroughly enjoyable, and I hope that Somerset Art Works is able to return as an exhibitor in future years.