On the 6th March, Somerset Art Works and the South West Heritage Trust hosted a seminar aimed at providing inspiration and advice for artists looking to develop projects with local museums. Somerset Rural Life Museum was the perfect location, enabling practical workshops and presentations within a museum environment. SAW Project Development Bursary recipient artist Lotte Scott, shares her experiences of the day with you here.

Lotte graduated in 2017 with an MFA in Fine Art Sculpture from the Slade School of Art. Her artwork explores place, time and material and for the last six years her practice has focused on the peat moors of the Somerset Levels. The SAW Bursary is a valuable asset ensuring she can maintain and progress her artistic process, not just financially but also providing her with a mentor in Zoe Li who has been able to guide her with a recent funding application. Submitted in February, it will enable Lotte to create an installation entitled ‘A Long Hundred’ in the Abbot’s Fish House in Meare which if successful will be part of this year’s SAW Festival. 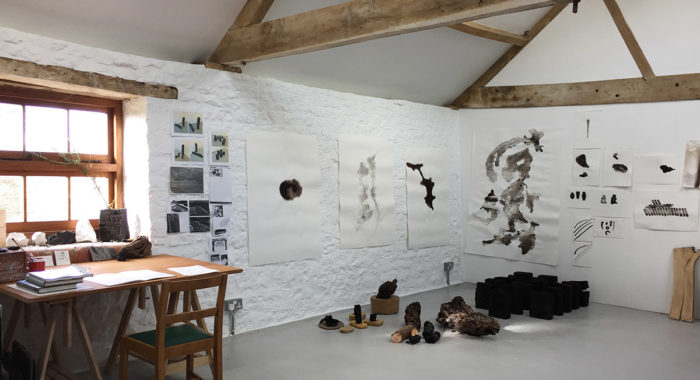 The Crocodile and the Museum

A funeral bier bearing an enormous black crocodile fills the window of Bruton town museum. The crocodile’s jaws are open wide, its tail trails to the floor and black foam jellies cover its back, gleaming like giant wine gums. Like a trophy kill crossed with a gothic pudding banquet, the creature is all at once sinister, absurd and enthralling.

I am in the Somerset Rural Life Museum, listening to sculptor Dorcas Casey speak about her involvement in MUSE: Makers in Museums, an inspiring project by SW Heritage Trust, in partnership with SAW, Devon Guild of Craftsman and the Devon Community Museums Officer. MUSE paired 8 artists with 8 museums to explore fresh perspectives and new audiences through artist collaboration. The resulting series of artworks, inspired by the museum collections, were shown as part of Devon Open Studios and Somerset Art Weeks in 2017 and in a group exhibition at the Museum of Somerset.

Casey was selected as artist in residence at Bruton Museum, where she spent 5 months working with a diverse collection she described as a cabinet of curiosities. It was from this creative partnership that the enormous black crocodile emerged.

As an artist interested in rural history and prehistoric archaeology, I have always been drawn to the idea of working with museums. Having spent the last 6 years exploring and researching Somerset peat moors, I am currently working to secure funding for an installation project in a historic building owned by English Heritage. I was therefore very excited to be attending the Muse seminar, as part of the program for my SAW Artist Development Bursary. For me, it was a timely opportunity to learn more about collaborations between museums and artists.

MUSE was introduced by Rachel Bellamy from SW Heritage Trust, who discussed the premise of the project and showed a short film documenting the chosen artists and museums. It was interesting to see the range of artistic approaches involved in the project; each relationship between museum and artist was unique, as were the artistic outcomes from the each partnership.

With each of the MUSE artists there was a great awareness of audience and an emphasis on public engagement. The drive to reveal the museum collections in new ways, to encourage people to look more closely at exhibits, meant a particular focus for the artists.

Museums are public spaces, but also intensely personal ones, particularly the small rural museums chosen for MUSE, which were predominantly run by hard working volunteers. The speakers – Bellamy, Casey and Jackie Brooks from Bruton Museum, each emphasised the importance of artists working collaboratively with the museum volunteers, involving them throughout the process to encourage a sense of ownership over the new artworks created during the project.

Dorcas Casey’s presentation made me think more deeply about the role of the artist in a museum context. In many ways, a museum is a very challenging environment for an artist to occupy – there can be too much to work with! I remember visiting a tiny museum in Morayshire where my Grandfather grew up. It was crammed to the rafters with an incredible jumble of objects spanning the last few centuries, each with a unique history, yet each indistinguishable in the astonishing clamor of stuff. Museums hold so much – how can their stories be successfully shared and reinterpreted by an artist?

It seems Casey felt this sense of saturation during the hours she spent exploring the Bruton museum storerooms, tucked away in a windowless attic. She described the process of discovering relics from so many different lives as both exciting and unsettling. Having made initial works casting brightly coloured sculptures from jelly moulds found in the store, Casey realised she wanted to create a piece that would impart a sense of unease back into the museum itself. The jelly mould sculptures became funereal black and Casey chose the form of a crocodile for the work – a primeval, instinctively feared creature. 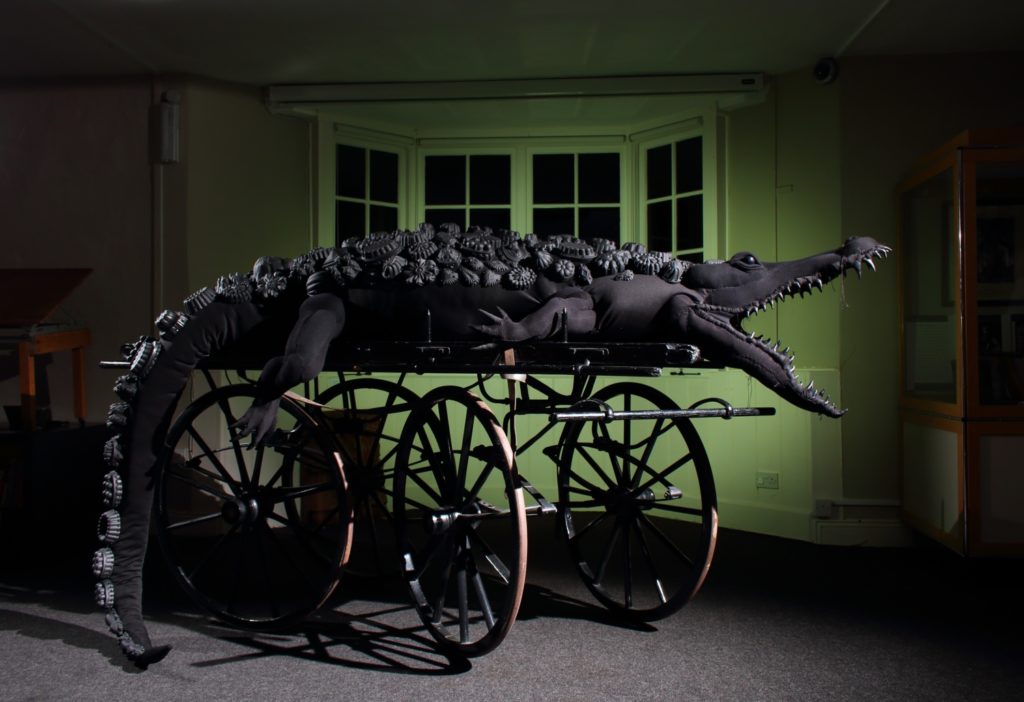 I noticed interesting parallels between the storeroom/museum and the studio/gallery – the private, behind the scenes places where work is done, and the public spaces where objects are presented to be engaged with. Having made the crocodile in her studio, Casey was unsure about how it would sit in the museum itself. It was only once she began installing that she realised the funeral bier was the perfect plinth for the sculpture. The existing museum exhibit and the new artwork came together in a way that celebrated both objects.

It was crucial to the MUSE partners that artworks enhanced the museum collections, without obscuring them. Casey also emphasised the need for the artists working in the museums to make pieces that “felt important” to them. This is a skillful balance to strike, creating works that honor and serve the museum that inspired them, whilst also satisfying the artist’s own creative vision.

I feel Casey’s crocodile is a brilliantly successful creation and an interesting work through which to consider the artist/museum dynamic. I admire her decision to make a piece she described as “non-rational and non-linear” in the face of such a wealth of historical artifacts. 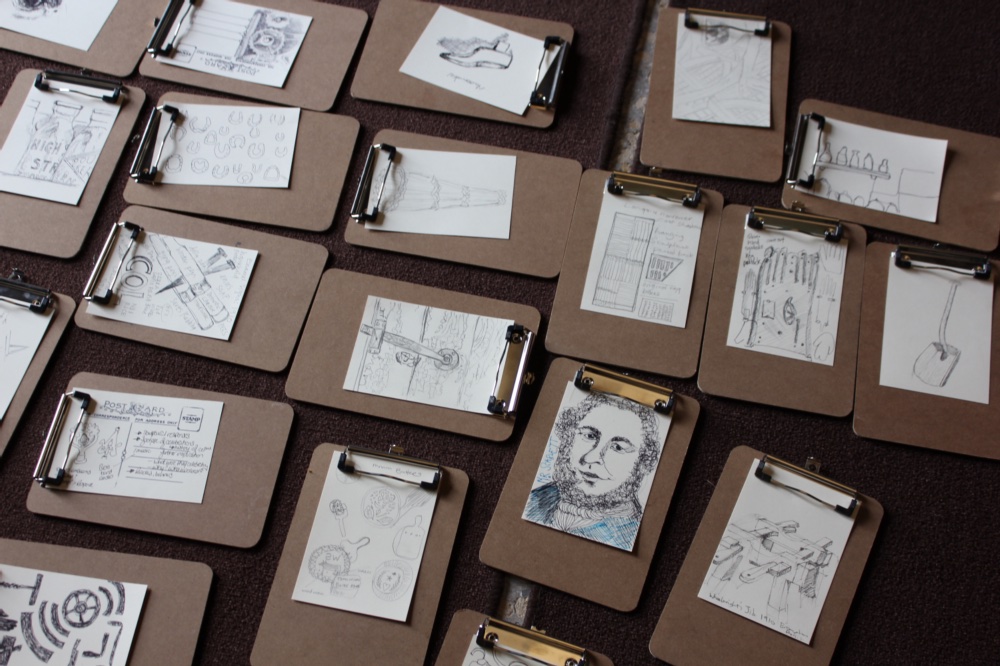 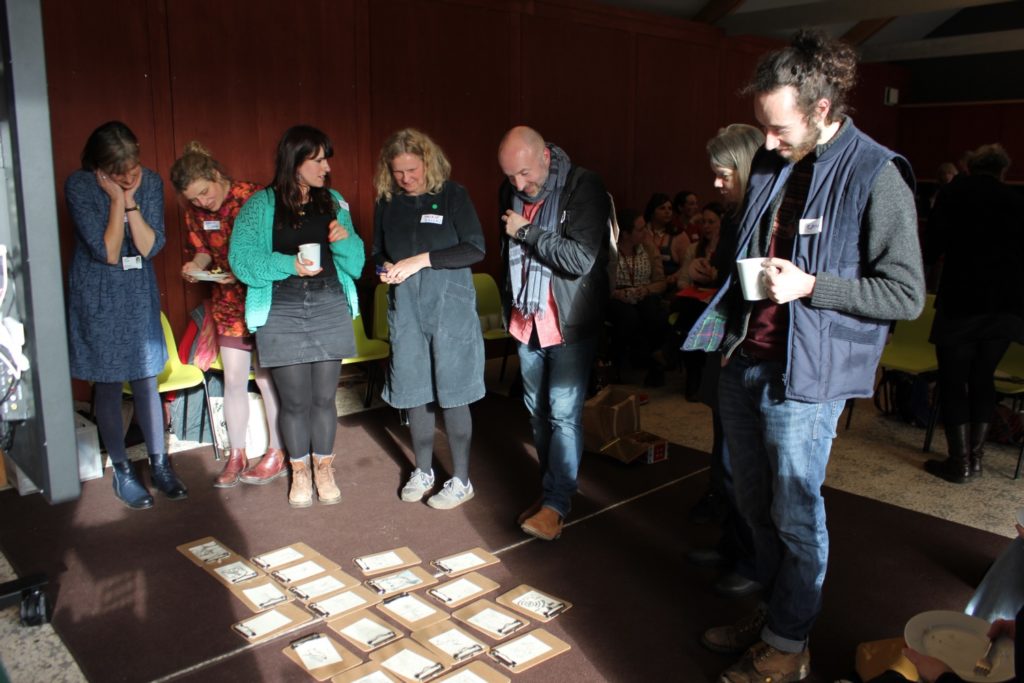 From listening to Casey and Jackie Brooks from Bruton Museum, it is clear that their MUSE collaboration was a mutually inspiring experience and that both artist and museum felt very well supported by the project. It was exciting to see the museum so comfortable taking risks with the artwork and that both parties reached new audiences in the process. Casey’s workshops with local schools, family days and the enthusiasm of the museum volunteers, resulted in a vibrant and engaging exhibition for Somerset Art Weeks.

I feel very fortunate to have gained such insight into MUSE through the SAW seminar. It was valuable opportunity to understand the project from both an artist and a museum perspective and has given me food for thought in my own practice. Like many others who attended the seminar, I left Glastonbury thinking how brilliant it would be if the MUSE programme could be repeated. There is such rich territory to be explored between artists and museums and great networks have been established to support this in the South West. Muse has certainly laid the ground for exciting future collaborations.