January to date has been a month for walking and every enlightened creative knows full well how this gentle act of embracing nature can boost the endorphins, provide quiet time to process the everyday white noise and allow space for new ideas to surreptitiously take form. Walking with a group lends itself to relaxed conversation, pauses are permitted, not awkward and if walking with a group of artists then these pauses are often physical as one stops to observe, sketch or photograph.

Earlier this month I had the privilege of walking with SAW’s Festival Coordinator, artist and curator Paul Newman. It seemed only fitting that we meet on Exmoor at Webber’s Post to walk and talk amid the ancient woods of Horner. We were joined by writer and ‘poet technologist’ Christopher Jelley whose role for the day was companion, guide and on location catering! 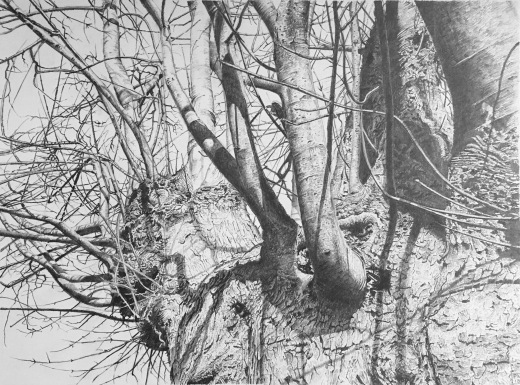 Paul describes himself as a graphic fine artist, working exclusively in graphite, extensive walking, close observation and research about land and place are integral to his practice. He has recently become a member of The Arborealists; such a lovely play on words for an art collective, and you would be forgiven for thinking that Paul’s main subjects are trees and woodland. ‘Tree Portraits’ certainly seem to be at the forefront of his work at present but on browsing his online portfolio you will see studies depicting water, cloud formations, standing stones and striking geological features. All have a strong sense of connection, they embody a deep layering of history, man’s continued attempts to understand and connect with the landscape both physically and spiritually. Our knowledge and understanding in some areas has been informed and enriched by advances in science but in others lost. We have no true understanding of the importance of standing stones to our ancestors and yet we still feel a strong sense of connection across time and that same emotion can be felt when engaging with individual trees and certain landscapes.

The trees Paul is currently drawn to are not in the first flush of life, but in their era of decay, of giving back to the forest. Their limbs are thick with ferns, moss, lichen and fungi. Their trunks often hollow, home for mini beasts to feed and live. Their roots go deep and the history they have stood sentinel to, so vast in respect to our time spent watching in the woods. Paul explained to me that an oak spends 300 years growing, 300 years living and 300 years dying. The trees in Horner certainly looked to my novice eye to be approaching that final, characterful stage and I’ve since learned that Exmoor is home to approximately 1,700 of these ‘veteran’ or ‘notable’ ancient trees. If these trees are to fulfill their true ‘life’ expectancy, careful management of the landscape is required for the long, long term. The National Parks require consistent public and government support to continue their role as the custodians of our ancient trees. Paul feels that his role as an artist is to broaden an appreciative audience who will see in his work a landscape that he cherishes and in turn realise their value for future generations.

At present Paul lives in Dorset, but it is a two-year project for The Arborealists that brought him to seek out the trees of Horner. The final exhibition is to feature work by a number of the group inspired by Exmoor and Dartmoor and is supported by a partnership with the National Parks. Paul had paid two previous research visits to Horner, one early last spring and then in November, and this year The Arborealists’ field trip will be to Dartmoor. Paul was quite succinct when he said that he would not be focusing his pencil on the Dartmoor ‘honey pot’ that is Wistman’s Wood, in the same way he had no desire to draw further attention to Exmoor’s ‘General.’ 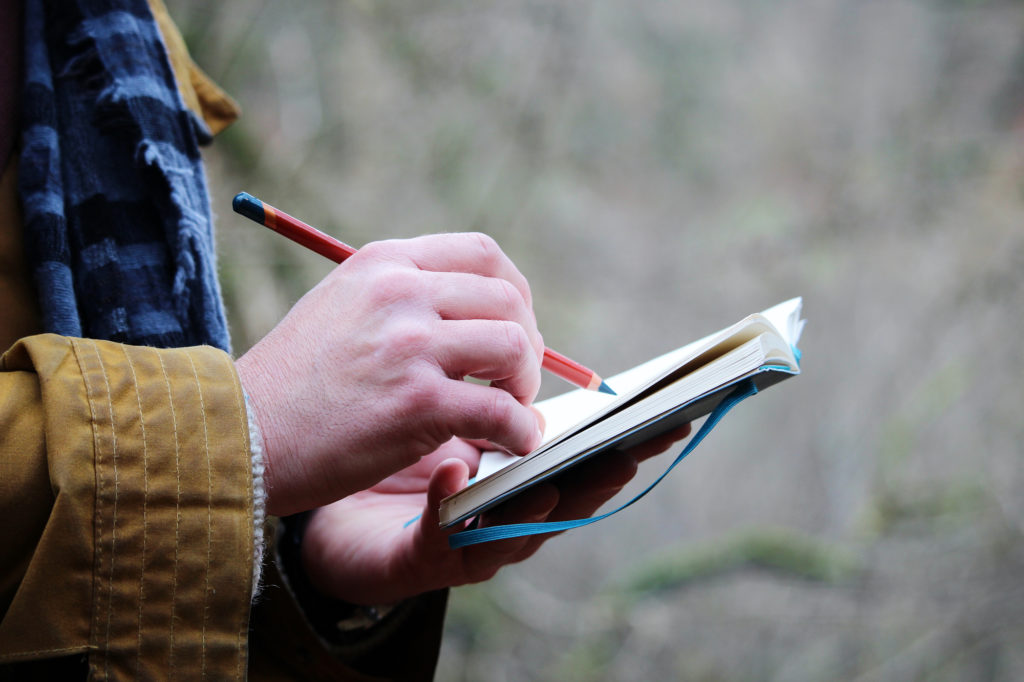 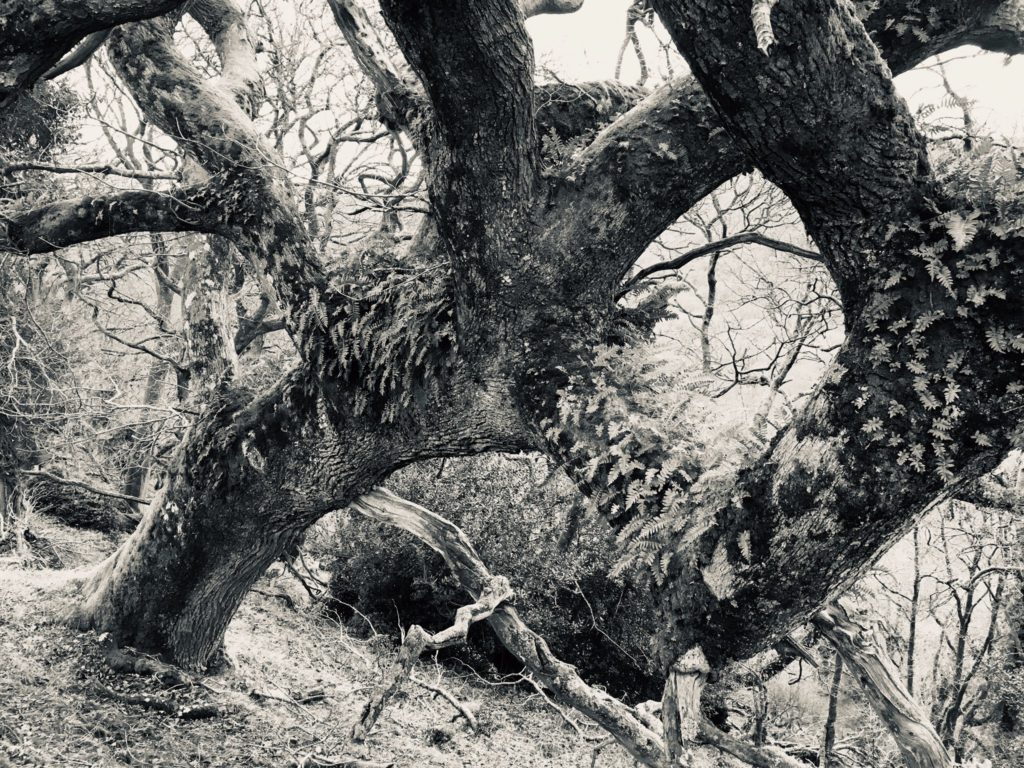 Out in the field, Paul captures quick 10/15 minute roughs in his sketch book the same way an artist may approach quick life drawings of the human form.  Notes are made and photographs taken, he loves this stage of the process, the research and anticipation, of being submissive to the atmosphere that will inform his decision making. Back at home in the studio the uncomfortable reality of putting pencil to paper for literally hours is stressful, and hard work, Paul admitted to not enjoying this stage at all, a truly honest revelation. Only once the work is ‘finished’ and exhibited can Paul feel a sense of ease and achievement, relax once more and the creative cycle continue. 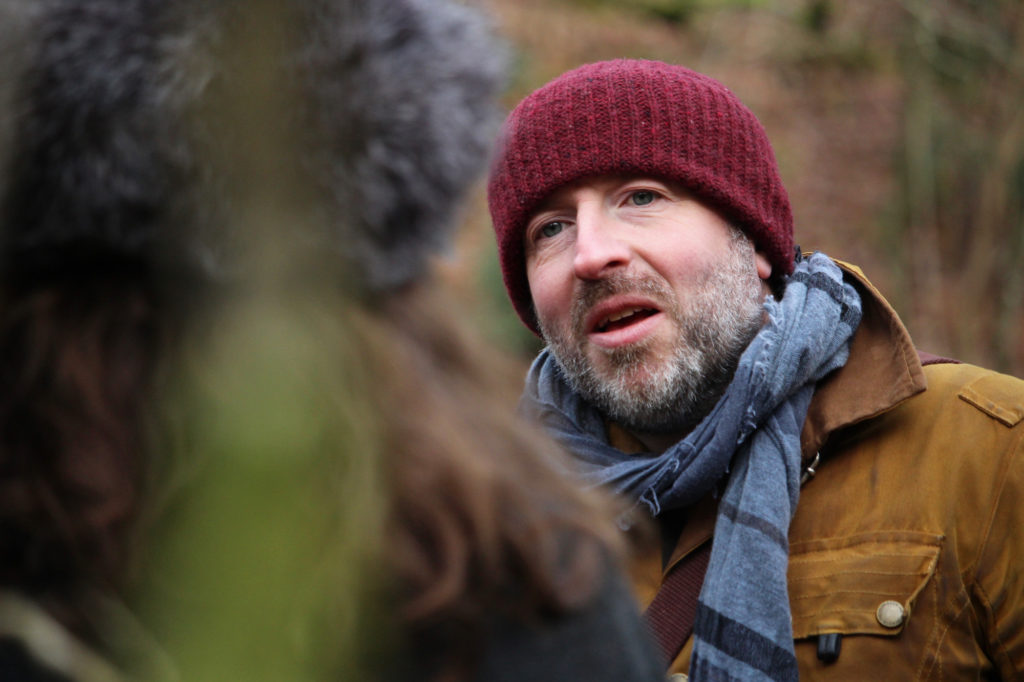 Working for The Bridport Times has enabled Paul and his partner Emma Tabor to map and walk the footpaths of Dorset to share with the magazine’s readers. Their routes, like Paul’s drawings also capture the fascination for historical insights and literary impressions within a landscape and they plan in the future to publish a book containing their favourite walks.

When Paul isn’t out in the elements he is of course busy co-ordinating this year’s SAW Festival. This is his third year in the role and 2019 marks the silver anniversary since Somerset artists opened their studio doors to the curious art hungry public. He hopes this year will reflect the success of the past 25 years remarking that “The ‘Festival Year’ provides an exciting opportunity for artists to develop their practice, experiment with new ideas, collaborate with one another and step out of their studios.” Festival year also means that Somerset artists can invite colleagues based nationwide to be part of the celebrations, which can only enhance the already dynamic creative network within the county. It promises to be a vibrant festival and Paul as an artist is well placed to understand the hopes and requirements of all those involved. 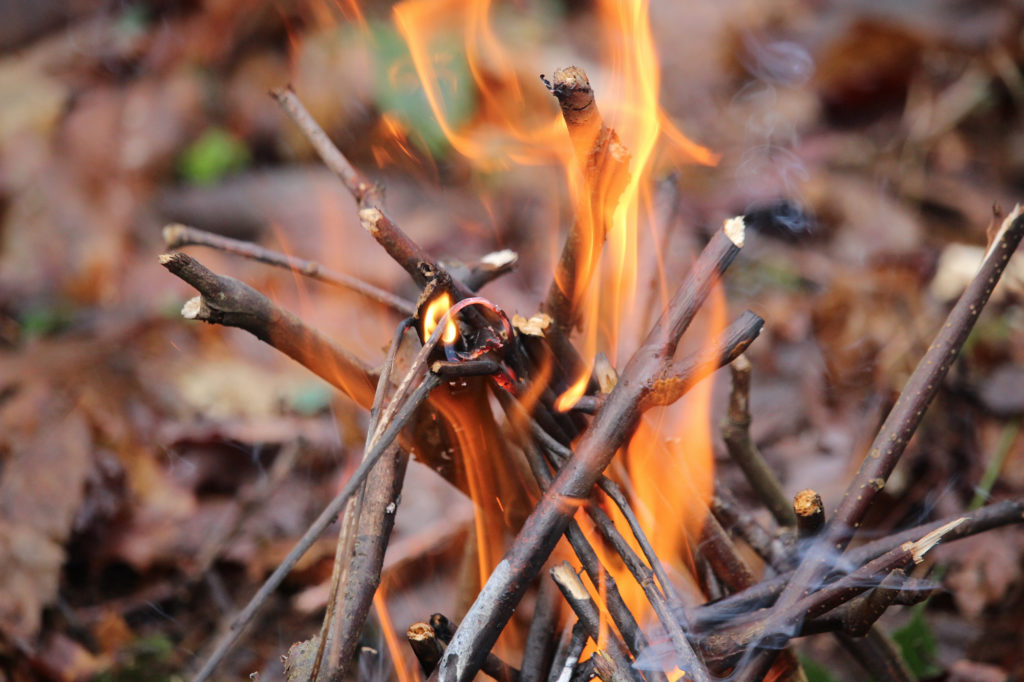 We had a thoroughly enjoyable day walking with Paul in the winter woods, we were surprised to learn on returning to Webber’s Post that we had been out for over 4 hours, sustained by tea and bacon butties prepared on a small camp fire by Christopher – we were careful to leave no trace. Paul has since said that he thoroughly enjoyed having the opportunity to reflect on his creative journey.