During the Christmas festivities thoughts in our house, gifts even, often look to the summer ahead in the form of festival tickets as there’s nothing quite like visualising how you are going to relax and enjoy those long sunlit days during the darkest afternoons of the year. With this in mind I thought for this SAW post I would invite artist Lucy Large to share her experiences creating site specific work for Dorset’s b-side Festival :

Sitting in my studio in mid-December, an insistent drizzle framing the view and the sinking feeling that our boiler is in its death throes, I find myself looking fondly at a collection of objects in the garden. Each object has been painstakingly wallpapered in a duck-egg blue damask paper and arranged loosely in a tableau scene – a scene that gets periodically rearranged by the wind.

The piece has been in my garden since early September, withstanding torrential rain, gales and frost and the grass is slowly growing up around it as it appears to take root. I’m fond of the piece in its current context but also for what it represents as a moment of opportunity for me as a maker. Early this year I got a nudge to apply for a bursary being offered by b-side Festival in Dorset, working in partnership with SAW. It brought with it a small amount of money, the chance to make new work to exhibit alongside more established artists as part of the arts festival and crucially for me, the inclusion of some mentoring from both b-side and SAW.

It was this offering of support that allowed me to overcome my nerves and apply in the first place. Like many artists I work alone, often in isolation. My work is also the means by which I try and support my family as a single parent. It often feels pressurized and as though there’s a lot riding on it – it can be difficult to take risks or try new ways of working when the commercial considerations appear to take priority. So in late March, having been successful in my application, I made the first of several trips to Portland to hear about the festival run by b-side, to get to know the island and meet the other contributing artists. Creative Producer, Sandy Kirkby became my b-side mentor and Zoe Li offered support from SAW which took the form of a couple of meetings and phone conversations. There was a lightness of touch to the support both offered, but the interaction was profoundly helpful – Sandy facilitated the practical issues around siting and installing work for the festival. She was also extremely helpful in teasing out ideas as I began to plan the work. Zoe has been fantastic in helping me contextualize this work as part of a practice – pushing me to become involved in artist networking events in Somerset, including a portfolio review with Mark Devereaux Projects hosted by Clayhill Arts and the recent “Prospecting” Symposium.

Over the summer months my ideas developed for the work I would show during b-side Festival. I was offered a spot to exhibit in a beautiful community walled garden in Fortuneswell on Portland, a stone’s throw from Chesil Beach – previously the site of a fine Jacobean house, destroyed by an almighty storm in 1824. Beginning as an absurdist attempt to reinstate the garden as a domestic dwelling I decided to wallpaper some garden tools – which developed into a still life of tools and domestic objects, all papered. Early on I referred to the piece as “papering over the cracks”, which became its title – the wallpapering presenting a decorative or fabricated layer that asked questions about the truths and realities that get covered up in the domestic space – often in the name of harmony or keeping up appearances. The objects were staged against a stone fireplace which also got papered. 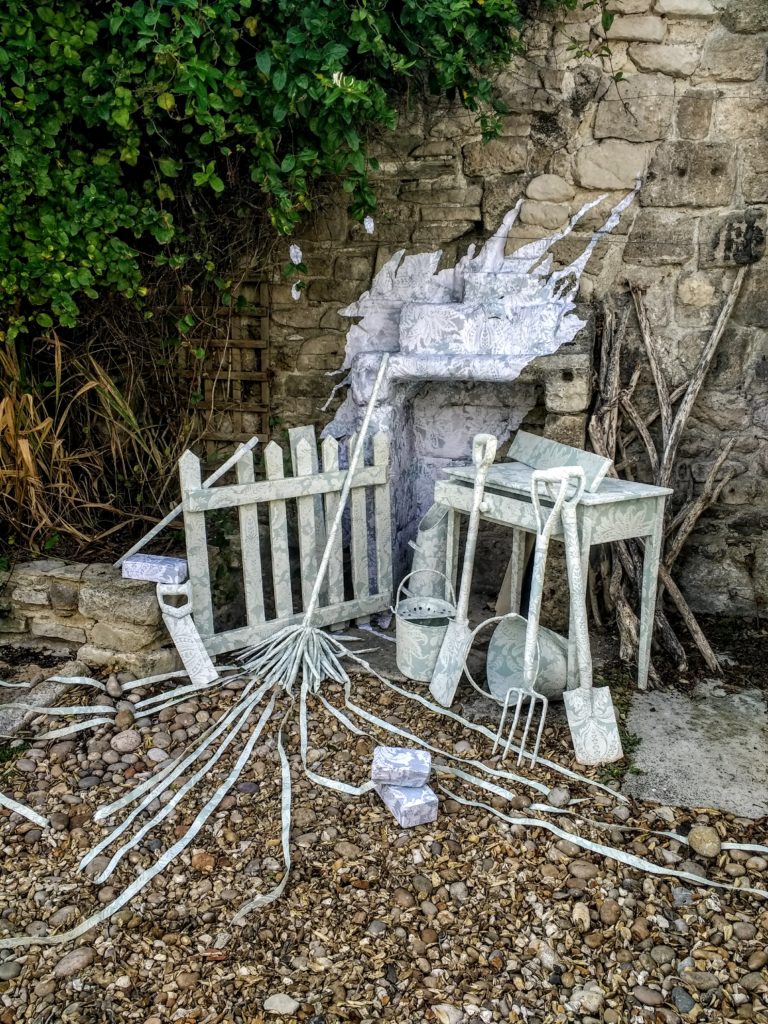 The making of the work was largely done in my back yard through the sweltering summer, closely watched by my bemused neighbours who contributed gifts of buckets to be papered! It also involved several trips to the wonderful island of Portland – a place I will continue to visit and feel very connected to.

Being awarded the bursary opened up a summer of making and thinking in a way I don’t often give myself chance to. It was a chance to receive support and advice from other professionals, something I haven’t really experienced since I was an undergraduate. It also gave my own making practice a huge boost – I don’t yet know what will follow on from it, but a shift took place, for which I’m enormously grateful.