Recently Carol, Zoe, Beccy and Sarah from the Somerset Art Works team took the train up to Liverpool to visit the 10th edition of the Liverpool Biennial. This years brief ‘Beautiful world, where are you?’ asks artists and audiences to reflect and respond to ‘a world in social, political and economic turmoil’. Over 40 artists from 22 countries present work across Liverpool’s public spaces, galleries, museums and great civic buildings for 15 weeks of exhibitions, performances, film screenings, family events, talks and tours. So how did the team get on? 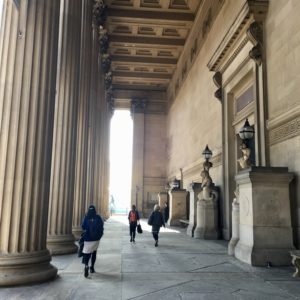 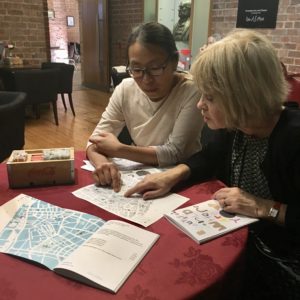 [Sarah] Arriving in Liverpool to glorious sunshine and and the warmth of summer on an October day was an excellent way to start our tour! Our first stop was the Neoclassical Grade 1 listed St George’s Hall where we made our way through underground corridors, past the prison cells and up to the courtroom where we met Hasnatt, one of the Biennial’s mediators who was kind enough to take us around the video and installation work held in the building. A highlight for me was Inci Eviner‘s Reenactment of Heaven (seen below), a film which incorporates layers of drawings, choreography, moving image and sound to create a mesmerising take on the ‘place of women in heaven’. Tiny figures move across the screen in all manor of ways (jerking, crawling, climbing…) underneath a moving skyline to the sounds of a female performer singing and uttering incantations. A truly immersive piece! 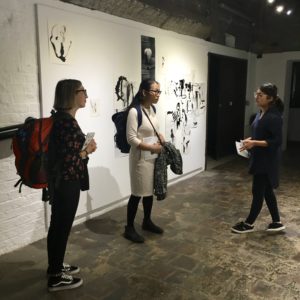 Hasnatt led us through to the next cell room and the work of Aslan Gaisumov. Keicheyuhea is a 26 minute film following the artist’s grandmother as she returns to her family’s settlement amongst the Caucasus mountains in Chechnya. 73 years previously she was deported, along with her family, to Central Asia. This is the first time she has returned and we are taken on an intimate and emotional journey alongside her as she reflects on her lost homeland and her family’s struggles. 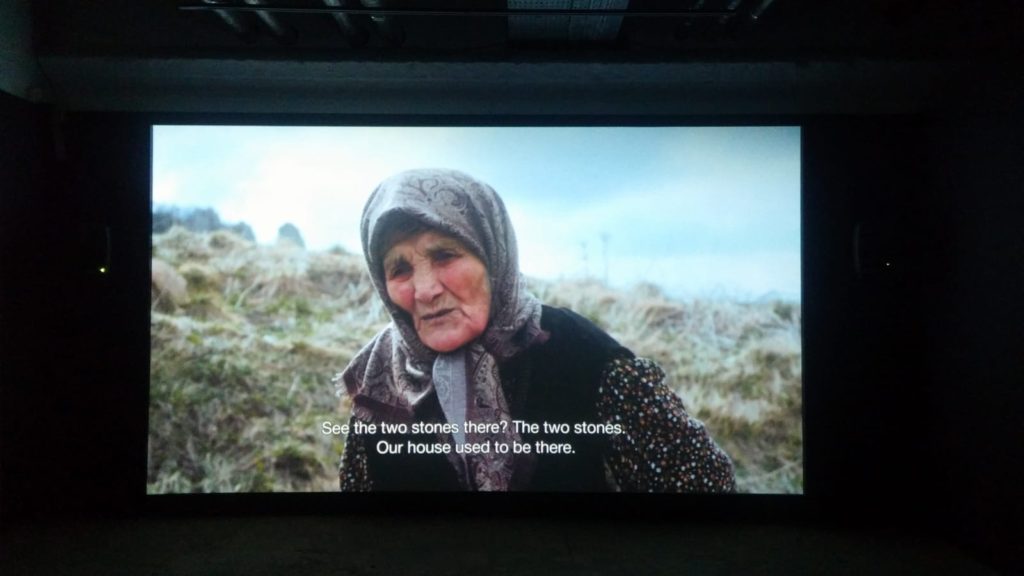 Next, we walked through the main streets of Liverpool to the Bluecoat Gallery. Abbas Akhavan has created a sculpture referencing ancient art destroyed by ISIS. A set of claws, the rest of the body missing, is set in a high-ceilinged area of the gallery with the viewer left to imagine the completed form. In the next room was a film by Ryan Gander, Time Moves Quickly captures a workshop with local schoolchildren with the project taking inspiration ‘from the Montessori method of education, based on self-directed activity, hands-on learning and collaborative play’. The children and Gander have together created a new public artwork – concrete forms taken from children’s building blocks, though on a much larger scale!

A quick visit to FACT to watch work by legendary French New Wave filmmaker Agnès Varda who has combined extracts from three of her films and presents them as an installation across huge screens, and Mohammed Bourouissa whose work documents a newly built community garden in Liverpool. Bourouissa also presents Horse Day which focuses on a North Philadelphia equestrian event, part of the community’s efforts to revitalise their neighbourhood. Then it was time to rest!

Our only full day, Thursday, started down on the waterfront at the Tate gallery. Haegue Yang‘s sculptures represent ‘figures and sites from folk tales and ancient traditions’ and had the team reflecting on Somerset’s folk heritage, maybe a future project? We couldn’t help take a quick look at the galleries permanent collections before heading to the top floor and the work of Annie Pootoogook, Brian Jungen, Duane Linklater and Joyce Wieland. After a short break for tea and cake we walked past the wonderfully colourful Mersey ferry decorated by Sir Peter Blake and headed into the Open Eye Gallery and RIBA North. Hack the Root is a newly commissioned installation with artist Mae-ling Lokko exploring alternative building materials. Agrowaste-fed mycelium (mushroom) is made into building panels and an accompanying film shows schoolchildren in Grow-It-Yourself workshops making the panels which are viewable within the installation. A fascinating process to utilise billions of tons of agricultural food waste. 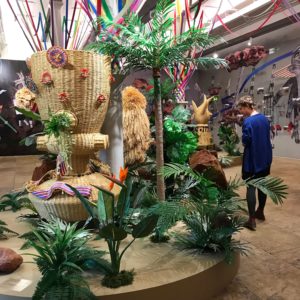 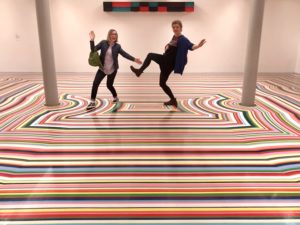 We couldn’t resist visiting the magnificent neo-Gothic Anglican Cathedral before meeting Mediation Coordinator Gabriela Saenger Silva who led us to the Oratory and Mathias Poledna‘s film installation. One of the wonderful elements of the Biennial is that venues not normally open to the public have become part of the Festival. The Oratory is a perfect setting for Poledna’s work, evoking early 20th-century European history.

Gabriela then took us to Blackburne House, an educational centre for women and home to the first girls’ school in the country, and currently housing two new commissions. One by Taus Makhacheva who has created a sculptural installation incorporating Autonomous Sensory Meridian Response techniques and video, which together serves as a spa for visitors to receive treatments. And a film by Rehana Zaman who has worked in collaboration with a group of young women from Blackburne House to explore ‘the work of anti-racist and women-led grassroots film organisations’. 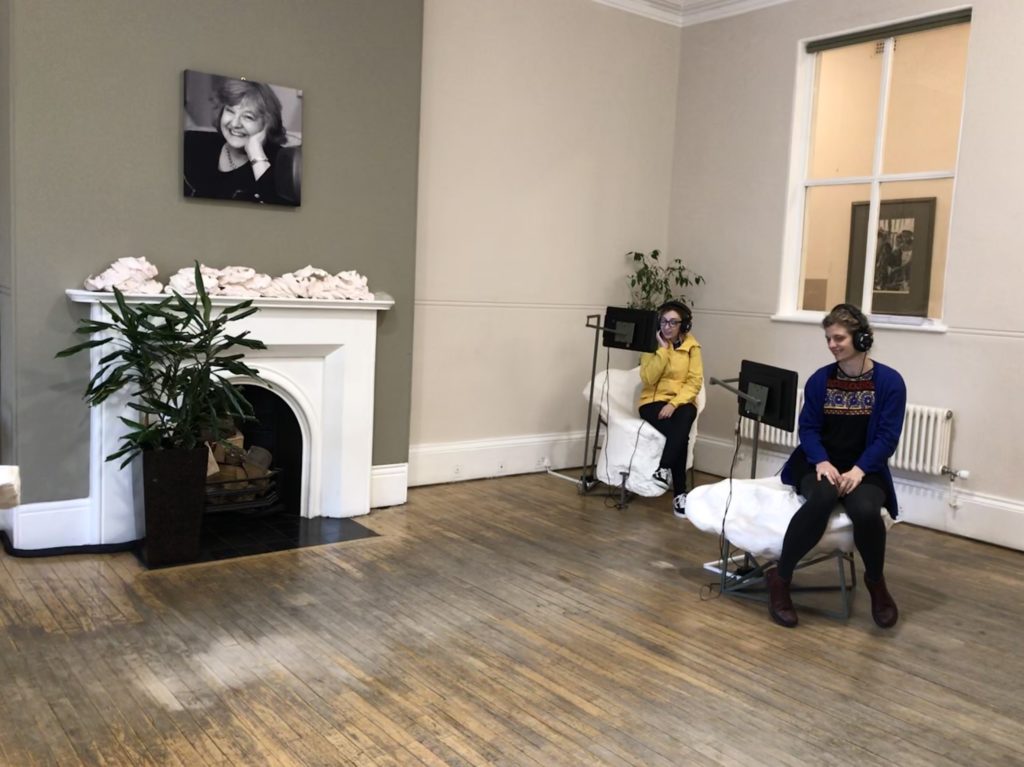 Next stop was the Metropolitan Cathedral before our final visit to the Victoria Gallery & Museum which houses a small exhibition of postcard-sized paintings made en plein air by Francis Alÿs, along with further work by Aslan Gaisumov and Taus Makhacheva. We ended the day at an exhibit from the Worlds within worlds programme, part of the Biennial, which ‘invites audiences to explore the rich histories and stories evoked by objects and artefacts from the city’s civic collections and architecture’. The Brendel Plant Models of the World Museum are a beautiful selection of anatomical models of plants made at the turn of the 20th century.  The weather outside had turned dark and showery but we were taking in the bright and beautiful flowers! 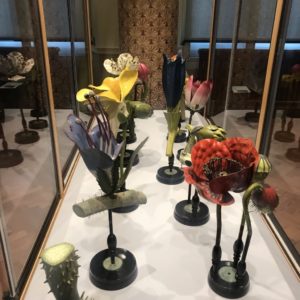 Visiting the Biennial gave us the chance to understand the technical demands of the Festival, particularly as this year’s programme has a large amount of film work, often in unusual places or with complicated setups. Gabriela explained the technical complexities as well the public reaction to so many digital installations. This prompted us to think about how digital work translates to our rural setting in Somerset and how we would like to have seen more installations making use of the city landscape, though this is something that artists and projects in our own county, and through Art Weeks, can develop to highlight the many historic and beautiful sites surrounding us. Unfortunately we ran out of time to visit more of the site-specific, large-scale work in Liverpool due to time restrictions, the weather and getting around on foot.

It’s also important to point out that the Liverpool Biennial is a free event, as with Art Weeks, allowing a wide audience to explore and discover contemporary art and to rediscover areas of the city. I personally found the wonderful mix of architecture alongside the friendliness of Liverpool residents greatly enhanced my enjoyment of the festival. If only we had more time to see the rest of the exhibitions! The whole experience inspired us to think about how our festival could evolve in the future.

We would like to thank Gabriela and Hasnatt for showing us around their favourite exhibits and for their knowledge and personal thoughts on the work. And to the rest of the Liverpool Biennial team for creating an inspiring and thought-provoking event. 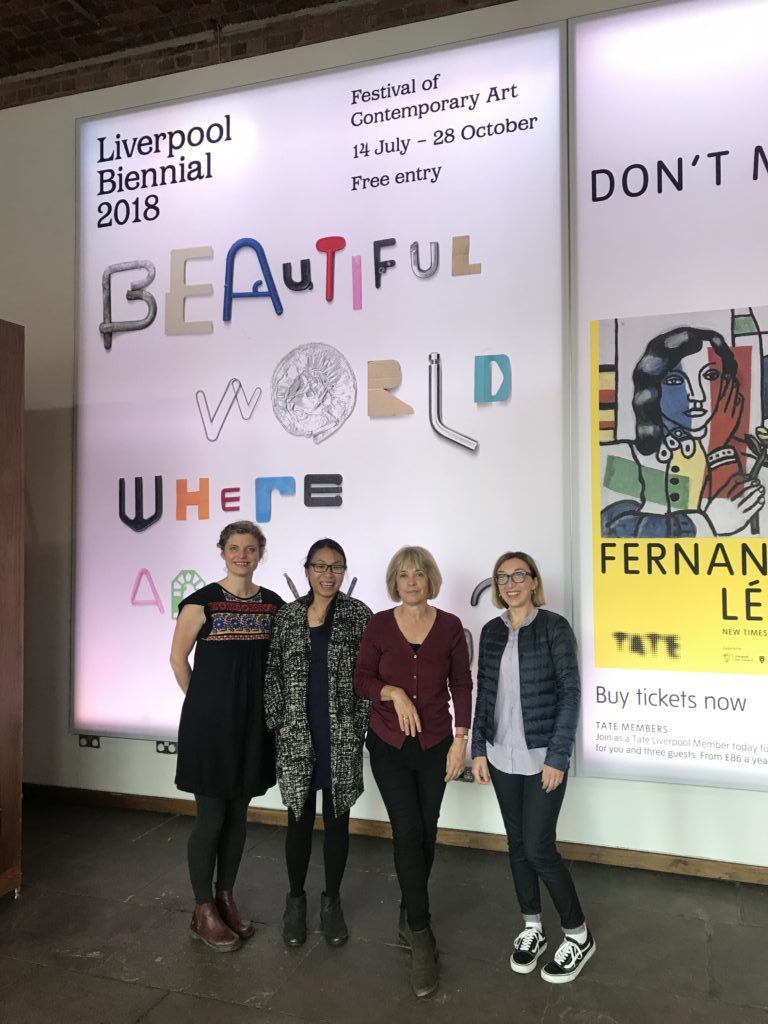