The weather for open Studios has been stunning, it often is, and on Thursday I relished driving some of my favourite roads in Somerset as I headed out to explore a selection of venues. My first destination was the Zig Zag building in Glastonbury. This vibrant creative hub has finally been able to open its doors to the public after five years patient, steady work to make it inhabitable after having stood derelict for thirty five years. Once the home to Morlands Sheepskin, its distinctive peaked factory roof line and expanse of smashed windows was the site that welcomed drivers heading into Glastonbury.

The restoration process has been minimal as owner Chris Black is keen to keep the history and patina caused by the years of neglect very much in evidence. This make do and mend attitude accentuates the buildings potential as a haven for new ideas, an accepting environment for alternative thinking, one that’s not too precious, a space that can absorb the impact of creativity. It’s so refreshing to find a building that’s not being gentrified, turned into portfolio flats but reclaimed for the community. 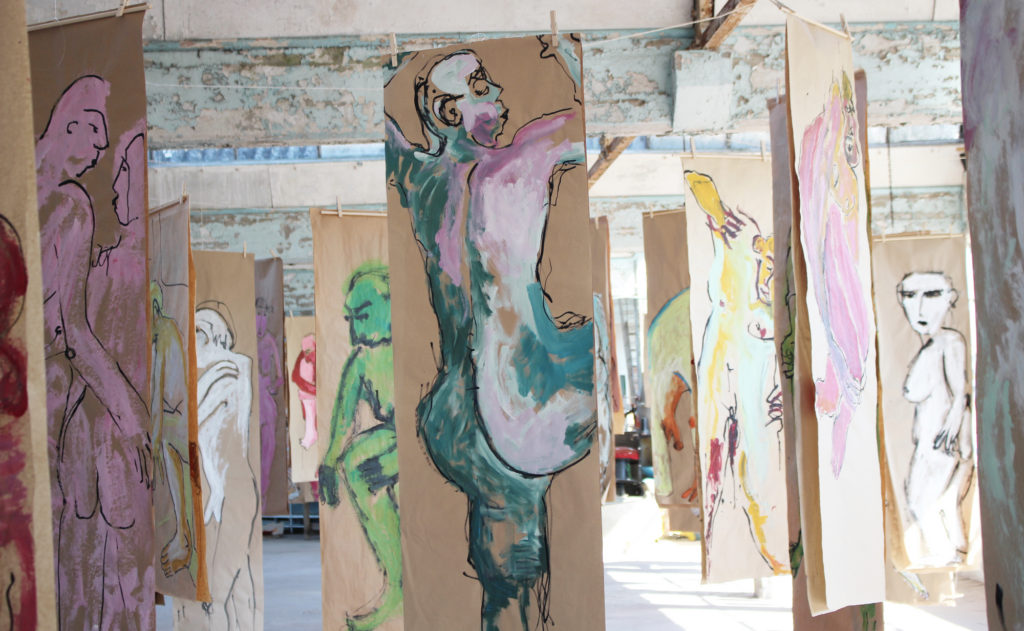 Megan had initially told me about her plans for her installation back in February when we attended one of Lyn Mowat’s wonderful artist walks. She was excited about the potential and particularly the capacity of the space, and on stepping into the upper floor of the Zig Zag you could instantly understand why. Five hundred suspended life drawings gently turned, silently shifting and dancing, filling the entire ‘ballroom.’ This collection of quick five minute sketches had slowly built over a period of seven years and now they were finally presented in their entirety. When I visited they performed in sunlight but there is no doubt as the light levels shifted so too would the atmosphere. 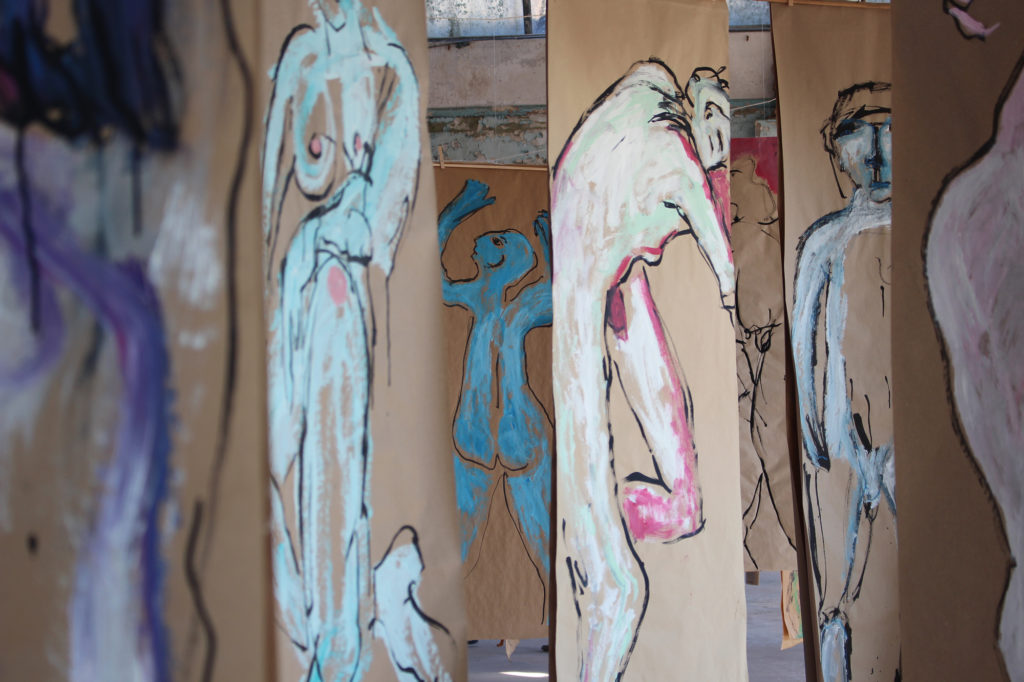 On the ground floor Megan had set up her ‘pop up studio’ where you could view her vivid portraits. Also on display were works created by visiting ‘A’ Level students from Richard Huish and attendees of the life drawing workshops she had hosted as part of Open Studios. It certainly felt like an invigorating place to draw and the resulting work captured that energy. 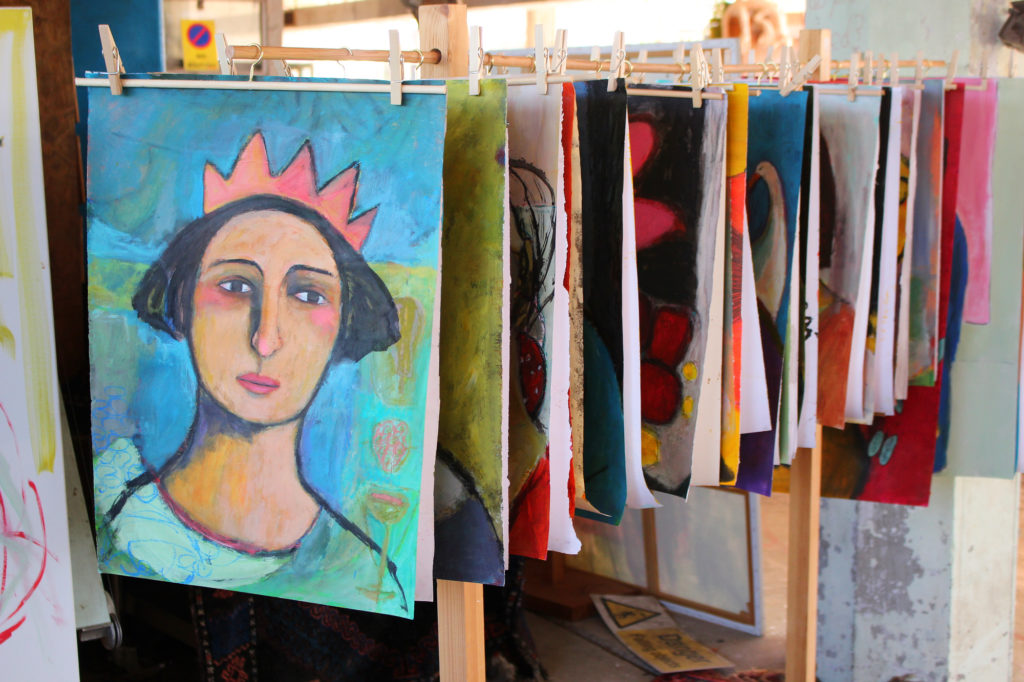 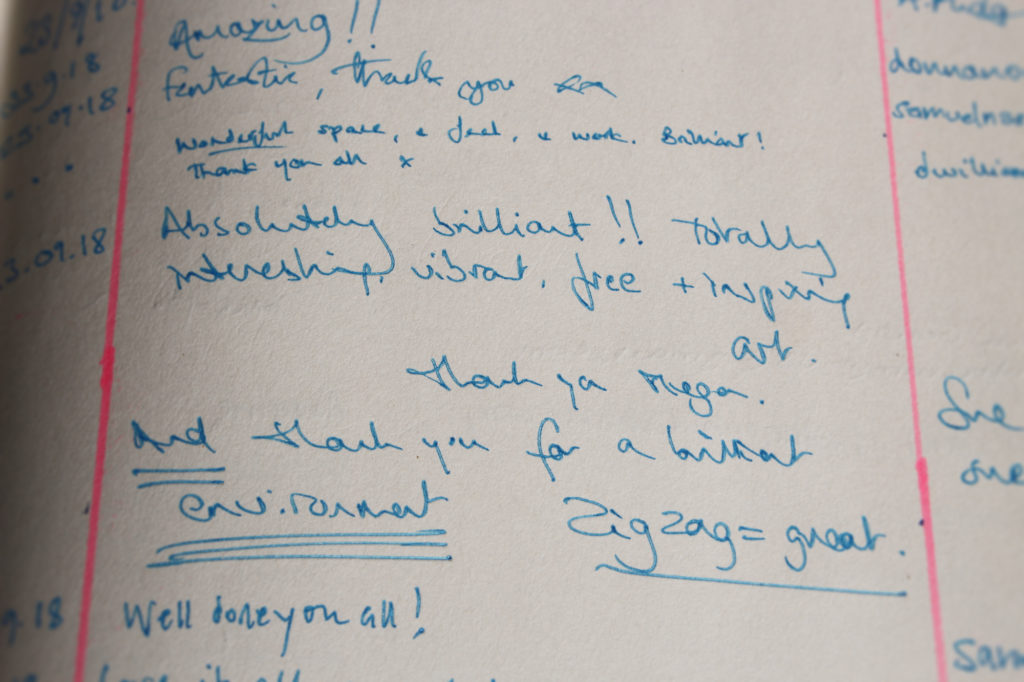 The next stop on my journey was the home and studio of Myrtle Pizzey. As I drove the characteristic roads that cross The Levels and approached Hill Farm I was ushered along by the incredible sculpted willows that are such a feature in Myrtle’s work, some are such strong local personalities that they are recognisable in her compositions.

Myrtle originally trained as a painter at The RWA in the early 1960’s and taught for many years in Bristol. She now finds printing, ‘sculpting’ the soft lino and the tones that can be achieved with careful considered cutting her preferred medium and the scale of her prints have quite an impact – one print echoed the dimensions of Megan’s life drawings, adding to the sense of trees as individuals. 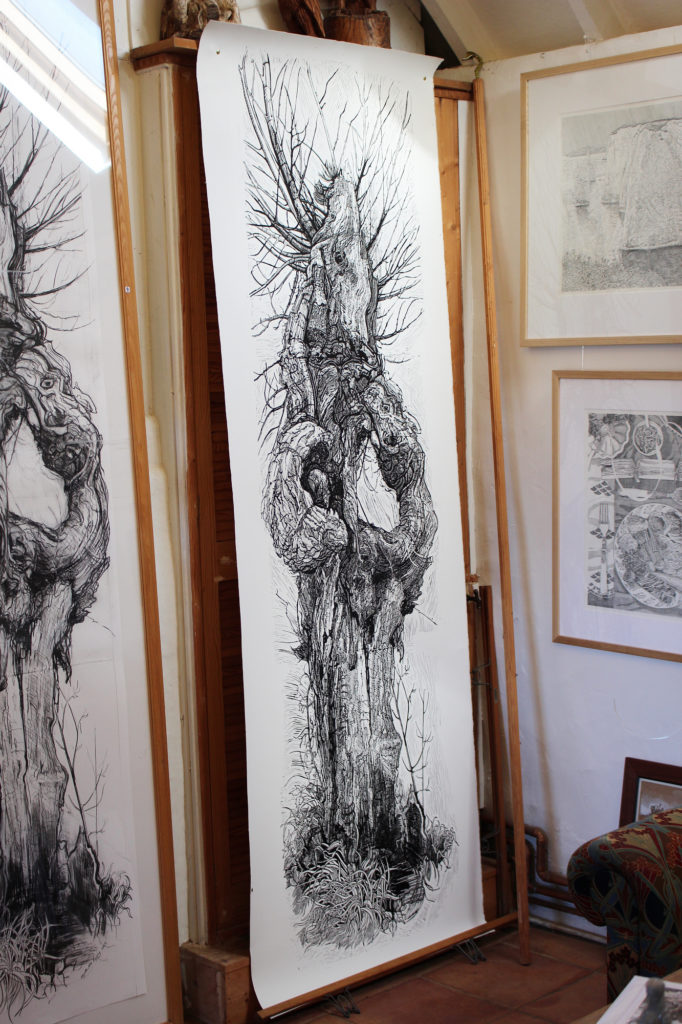 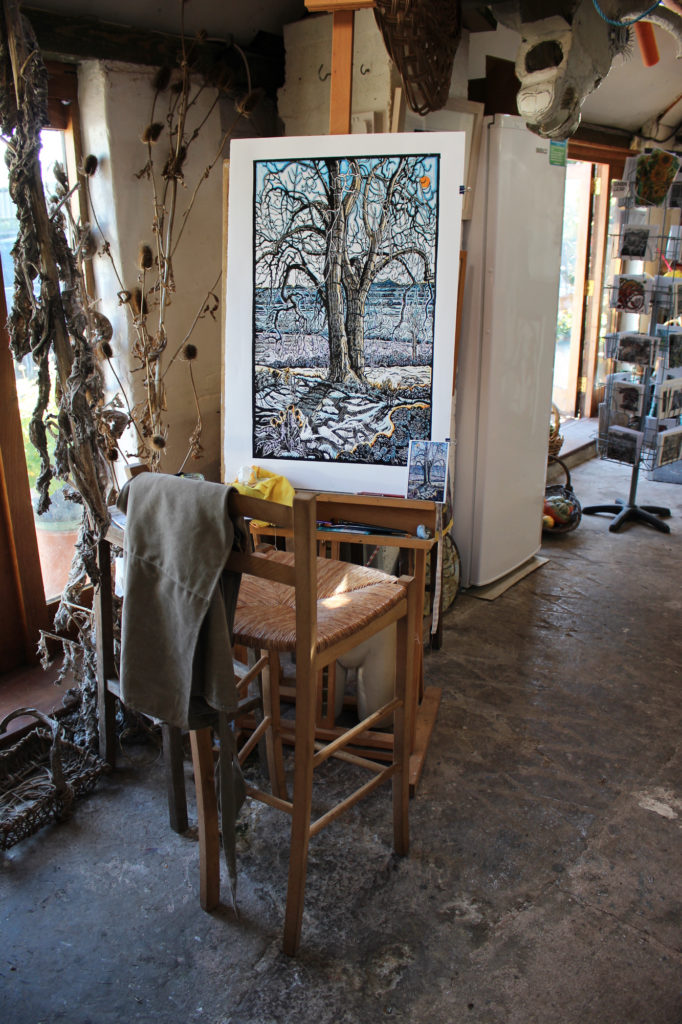 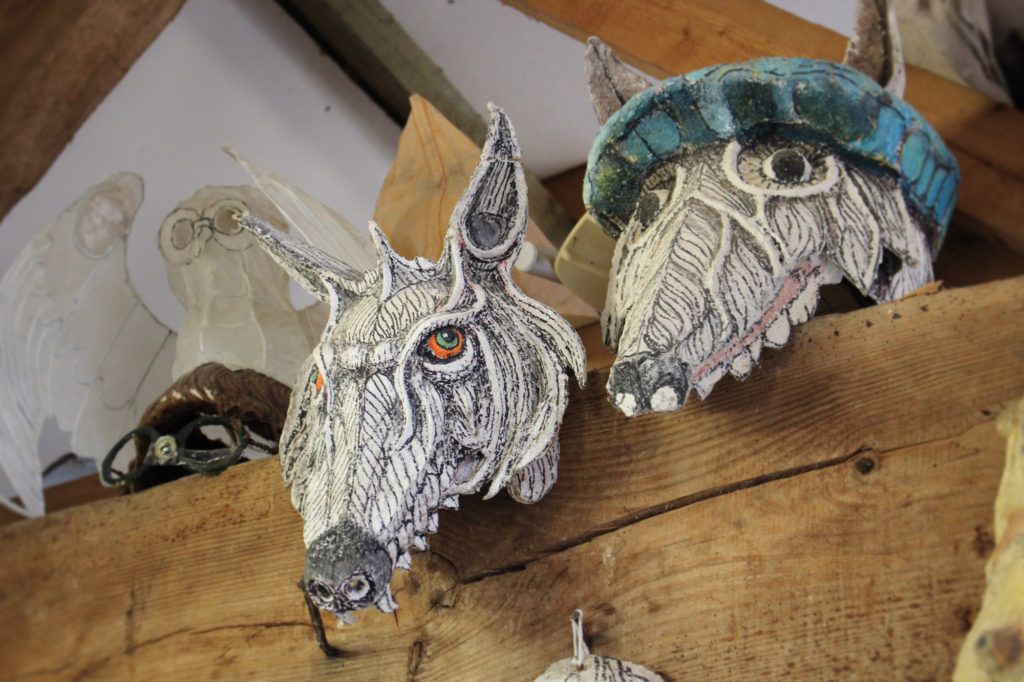 Myrtle tints her finished prints with water colour, working from a photograph of the ‘master print’ to aid the sense of continuity and edition. Every corner of her light and spacious studio was utilized and watching over her while she worked were her husband’s animal sculptures created for many school dramas. An artistic family her son, Jason, was also exhibiting his detailed illustrations and their styles worked in harmony. 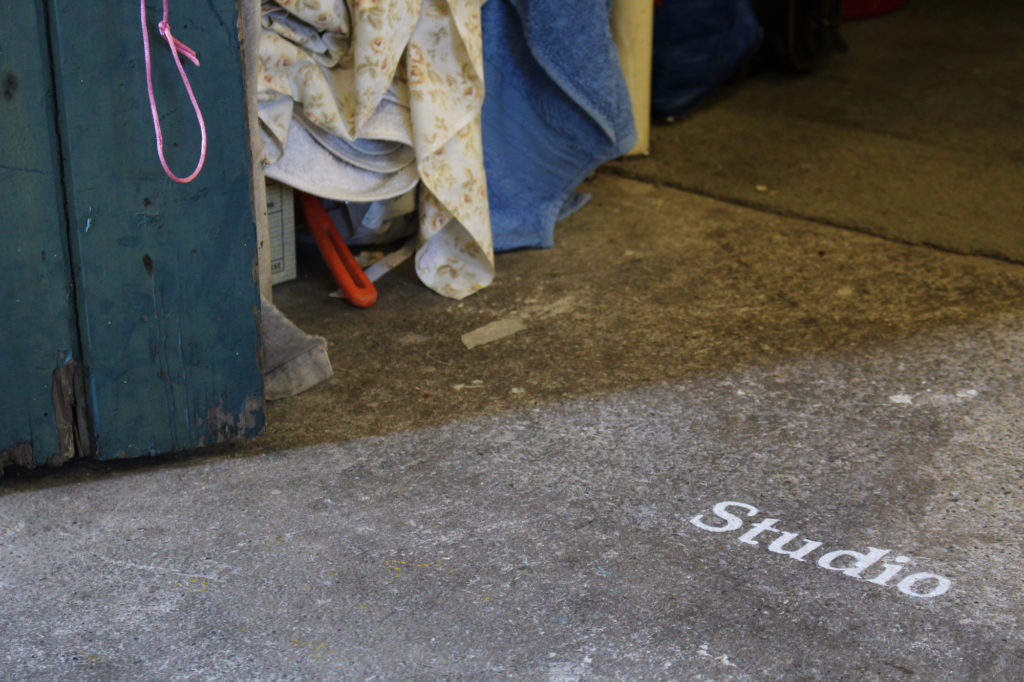 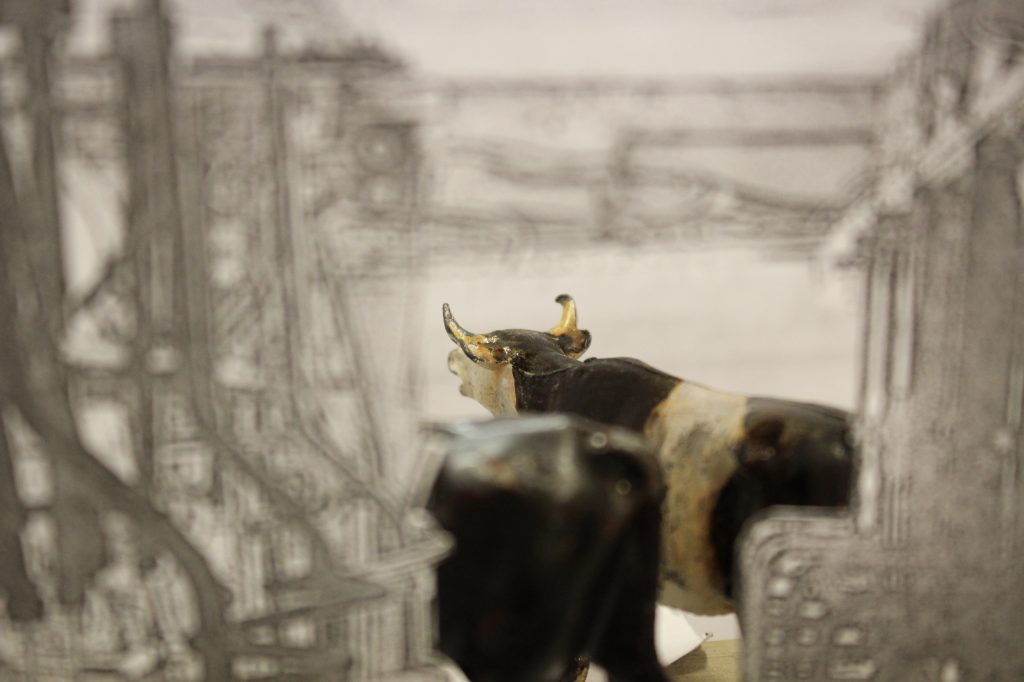 My next destination was to revisit Fiona Hingston’s studio to see how her work had evolved since the photo shoot with her for the cover of this year’s brochure. I love it when a smile is raised upon entering an exhibition and Fiona’s work is certainly playful. The use of the discarded, battered feed trough as agricultural architecture was resourceful and inspired. Her observations are insightful and meaningful, and her quirky yet traditional approach to presentation engaging. She had maximized space within the compact barn, playing with scale, dividing her studio and gallery with a literal floor plan and visitors were requested to ‘Exit through the Bookshop.’ 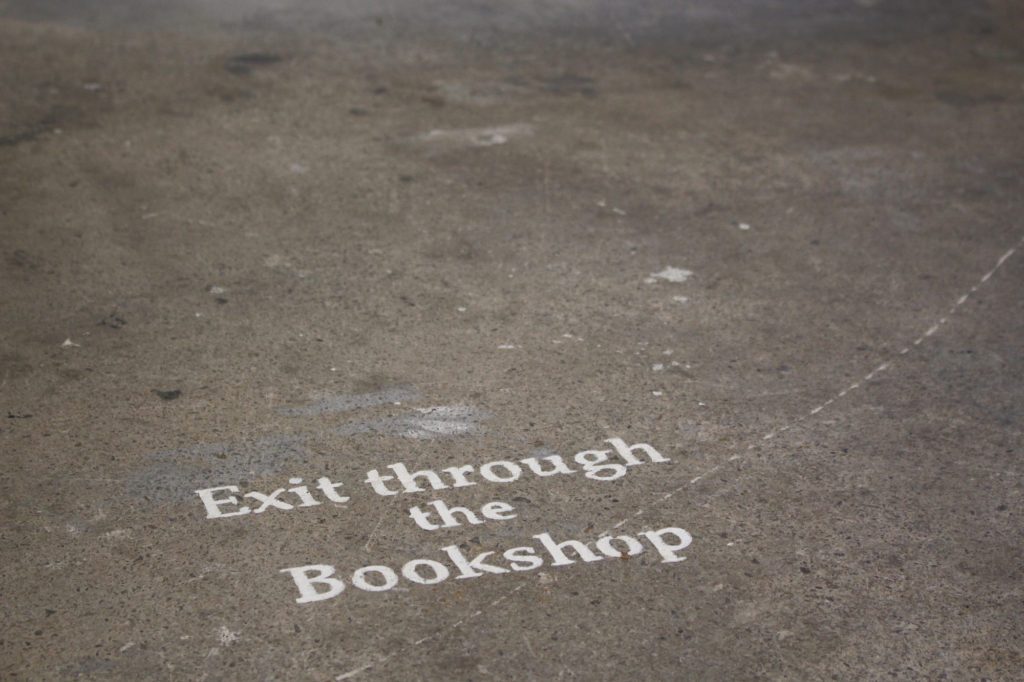 The day ended with a visit to see an artist who has participated in Art Weeks for the past twenty years. I am very familiar with Angie Rooke’s colourful landscapes as her cards are popular with our customers at Number Seven. I first viewed her paintings some years ago at one of the group exhibitions she regularly organizes in the village hall near her home but this is the first time I’ve been able to visit her studio. On arrival the door to her home was open and inviting, the September sunlight gently lit the front room and the reds and greens of the decor were from the same palette as her paintings – an elegant hound lounged on the sofa relishing in the sun’s warmth. 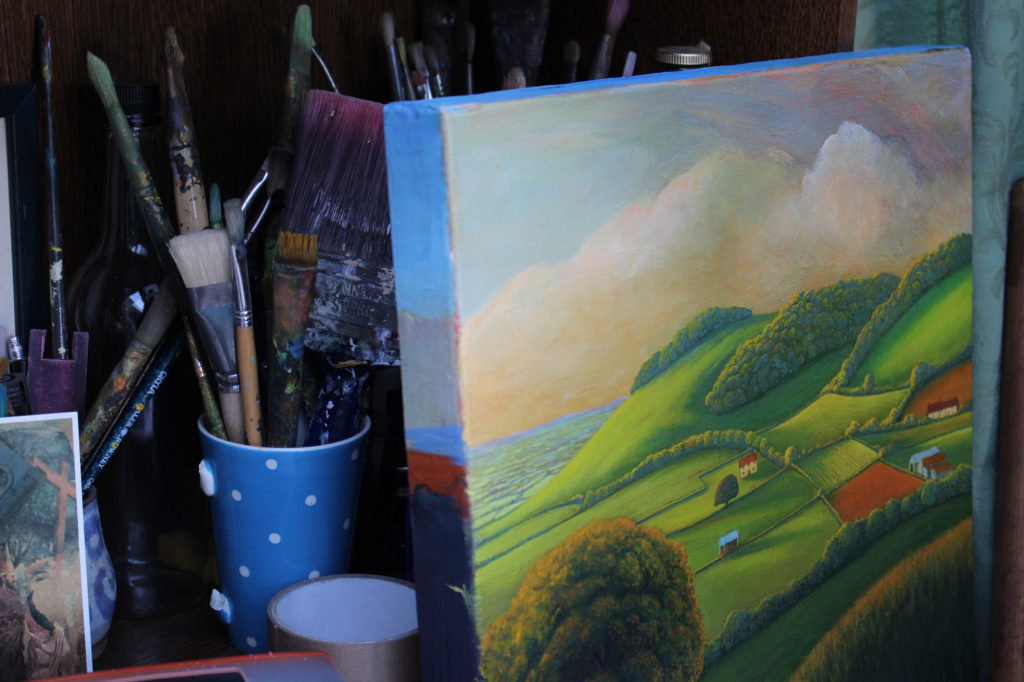 The detail in her paintings is meticulously executed and yet she explains she is still striving to learn how to paint a tree and wishes that she could now simply go for a walk without having to feel that every hue and change in light needs to be captured by her brush. She strives to paint most days and her studio window is well placed to witness the woods and fields beyond slowly respond to the change in season. It is no surprise to learn that her paintings sell well, there were a number of red dots and empty spaces on the walls. Her landscapes certainly depict Somerset with its earth reds heightened by her colour sense and long purple shadows envelop fields of contrasting green.

It was a relaxing end to an inspiring day and reminded me how much visitors to Open Studios take delight in meeting and talking with the artists who participate. I make no apologies for the number of photographs in this post, more than my usual quota but surely Open Studios is ALL about the Visual!