I am fascinated how stories, artists and locations interweave and connect, and my recent conversation with Andrea Oke seemed to be full of such links. We met recently at Halsway Manor, a historic 15th century manor house in Crowcombe, which has been home to The National Centre for Folk Arts since the 1960’s. The centre’s main focus is naturally a musical one and they have a long established history of hosting traditional instrument, dance, song and storytelling residencies. However, this is set to change due to their recent partnership with Somerset Art Works. Last October Alison Jacobs set up her studio in the Summer house where she created work inspired by the folk art archive particularly totemic animals and ritual disguises.  This year artist Andrea Oke is to be their visual artist in residence. She has been commissioned to create a body of work that will form the final instalment of A Landscape of Objects, which successfully linked artists with Forde Abbey, Lytes Cary, Kilver Court and Hestercombe Gardens.

During our conversation it came as a surprise to learn, that although situated in a county rich and rightly proud of its folk heritage, that Halsway’s USP is not Somerset centric. The collection found within its characterful library contains a broad spectrum built up over decades by its incoming visitors who have brought with them a wide-ranging national appraisal for all things folk. It is for Andrea to discover within this archive Halsway’s immediate folklore landscape. To shine a light on the half forgotten stories and the mavericks who sought to preserve these traditional tales, customs and songs, so that she in turn can make them accessible to new and future generations.

Before embarking on her residency Andrea was already fascinated by the life and work of Somerset folklorist Ruth Tongue. Ruth’s publications were highly regarded during the 1960s but during her life time the academics of the folklore world began to question the sources of her stories and cast doubt on their authenticity. Dr Katharine Mary Briggs sought to help Ruth Tongue reference her tales with dates, location and names of the teller but unsatisfied, the academics found the information too vague and began to accuse Ruth of fabrication. Born in 1898 she was already quite an age to be recalling specifically such encounters and surely it is understandable that many of these tales, no doubt heard in childhood, were integral to her literary fabric and not recorded with the deliberate rigorous intent of one with an academic mind. 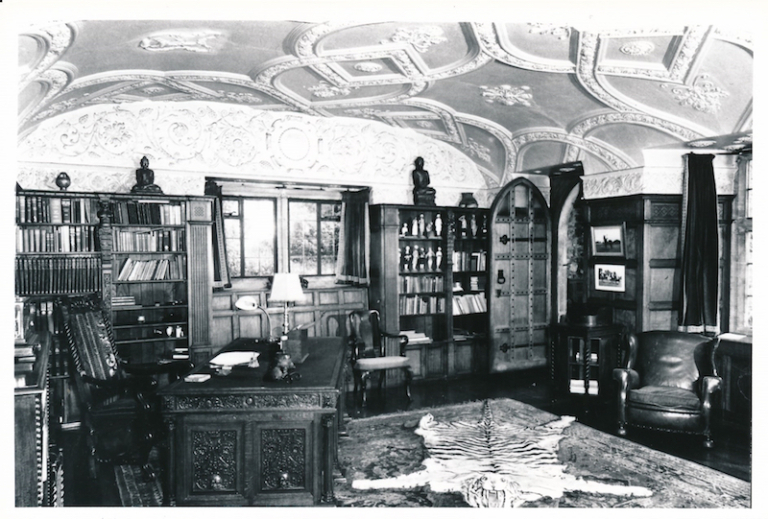 Many of Ruth’s personal papers, notes and sketches are stored at the Somerset Heritage Archives in Taunton and it was thought that most of her collection had been destroyed – two of her cottages were severely damaged by fire. When Andrea initially explained to Halsway that she was interested in drawing much of her inspiration from the work of Ruth Tongue they were a little reticent at first. She is still currently viewed to be rather an eccentric and were concerned that her work carries little credence, but perhaps this is exactly why her work should be granted further investigation. Halsway’s librarian, Matt Rose, is currently archiving the entire collection at the Manor, and Andrea has learned that there is a filing cabinet literally stuffed full of Ruth’s notes that are yet to be professionally archived. She has also met with Biddy Rhodes, a volunteer at Halsway who initially helped file Ruth’s papers when they first arrived, she also knew Ruth Tongue as a child, and this is where I feel Ruth Tongue’s story slips into folklore itself. . .

Ruth taught Biddy a song, apparently, she taught many of the children in Crowcombe their ‘own song’ and Biddy’s was, is ‘Severn no More.’ A recording of Ruth singing ‘Severn no More’ with a local WI group can be found in at Halsway but recently Andrea and Matt sought permission from the current landowners where the romantic ivy clad remains of Ruth Tongue’s cottage can still be found and recorded Biddy singing ‘her song’ – when Andrea told me this a shiver of history crossing paths went through me.

The cottage is situated in the vicinity of Halsway in an area that was once marked on maps as Worm Cleeve. Worm, denotes dragon, and nearby Crowcombe Church is renowned for its elaborately carved two headed beast. Re imagined as a silhouette puppet by Andrea, this local mythical monster is to feature in the animation she is currently making. Inspired by the filmmaker Lotte Reiniger, whose pioneering silhouette animations are instantly recognisable, and I certainly remember being enchanted by them as a child. Following Lotte’s step by step instructions, Andrea has built her own multi-plane camera which allows different layers of imagery to be manipulated and captured on film. The layers act rather like the backdrops of a stage set except they lie horizontally rather than vertically and the puppets in the foreground are her actors. The puppets Andrea has made are also true to Lotte’s methods, with delicate handmade hinges and lead to give them weight, making them easier to handle when animating. During Art Weeks Andrea will be relocating her studio to Halsway and you will be able to see the fantastical camera she has made as well as the completed animation. 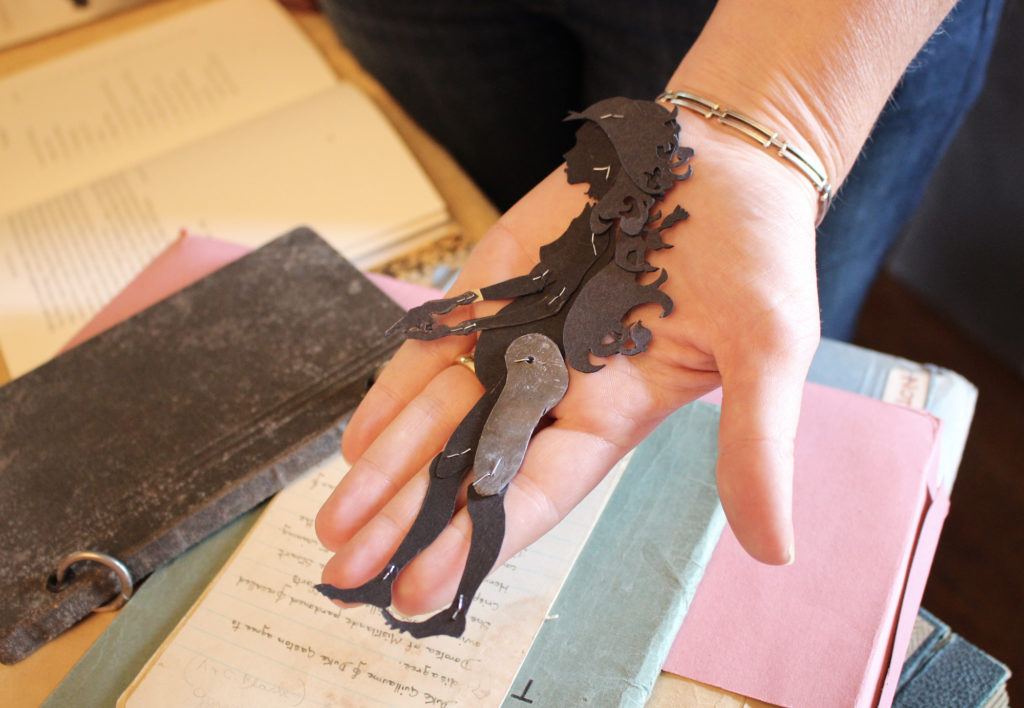 Whilst working on the project Andrea has come to the conclusion that rather than being viewed as an academic, Ruth should be seen ‘as a writer and performer whose archive captures many elements of local life that we cannot afford to loose.’ The team at Halsway are very supportive of this alternative appraisal of Ruth. Biddy too welcomes this refreshing, positive attitude to Ruth’s collection and has described Andrea as a ‘safe pair of hands’ which she takes as a great compliment – particularly from someone who holds such strong, vivid recollections of her time well spent with Ruth.

Shadowland at Halsway Manor will be open to visitors during the final few days of Open Studios 10am – 5pm Thursday 27th – Sunday 30th September.  On Saturday 29th at 2pm there is a ‘meet the artist’ event, while on Sunday families are invited to join Andrea’s puppet making workshop. Do book in advance, the cost per family is £10.

A LANDSCAPE OF OBJECTS