A banner is a thing to float in the wind, to flicker in the breeze, to flirt its colours for your pleasure, to half show and half conceal a device you long to unravel… Choose purple and gold for ambitions, red for courage, green for long cherished hopes.’

Sunday the 10th June 2018 will remain vivid in the memory for the thousands of woman who descended on the UK’s political capitals to celebrate the centenary of the first votes for woman. Among the giant swathe of green, white and violet were a group of woman and girls representing Somerset, inspired by the women of the region who campaigned on their behalf over one hundred years ago.

Processions was produced by Artichoke and commissioned by 14-18 NOW, with the emphasis on celebration, inviting artists and organisations to create banners that would echo and honour the legacy of the beautifully crafted, stitched and embroidered banners of the suffrage movement – they were the original ‘Craftivists’ and it is hard to imagine how subversive these ‘homemade’ banners were at the time.

Somerset Art Works was delighted to be commissioned to take part in this mass participation artwork, as connecting and empowering communities via art and making is high on their agenda. This exciting project was managed by SAW’s Learning & Engagement Manager Beccy Swaine and in March I was able to attend one of the very first workshops at Strode College led by artist Dorcas Casey. Students from Richard Huish College in Taunton and Bruton School for Girls also participated in her vibrant workshops embracing the entire ethos of the project. The finished banners proclaim slogans from the time in striking contemporary colours, in a unifying palette that resulted in successfully creating a dominant and strong presence within the Procession. Richard Huish chose ‘Courage calls to Courage Everywhere’ which features on the recently unveiled sculpture of Millicent Fawcett in Parliament Square, while the Strode banner declares ‘Make More Noise’ which comes direct from a speech by Emmeline Pankhurst and still feels acutely relevant today.

‘We wanted the finished banner to represent all our voices and ideas. Using neon, metallic and glow-in-the-dark thread we used traditional hand-embroidery techniques to echo the processes used by the suffragettes. Embroidery feels like a good metaphor for the suffrage movement; where small individual contributions achieved a huge shift in opinion.’ 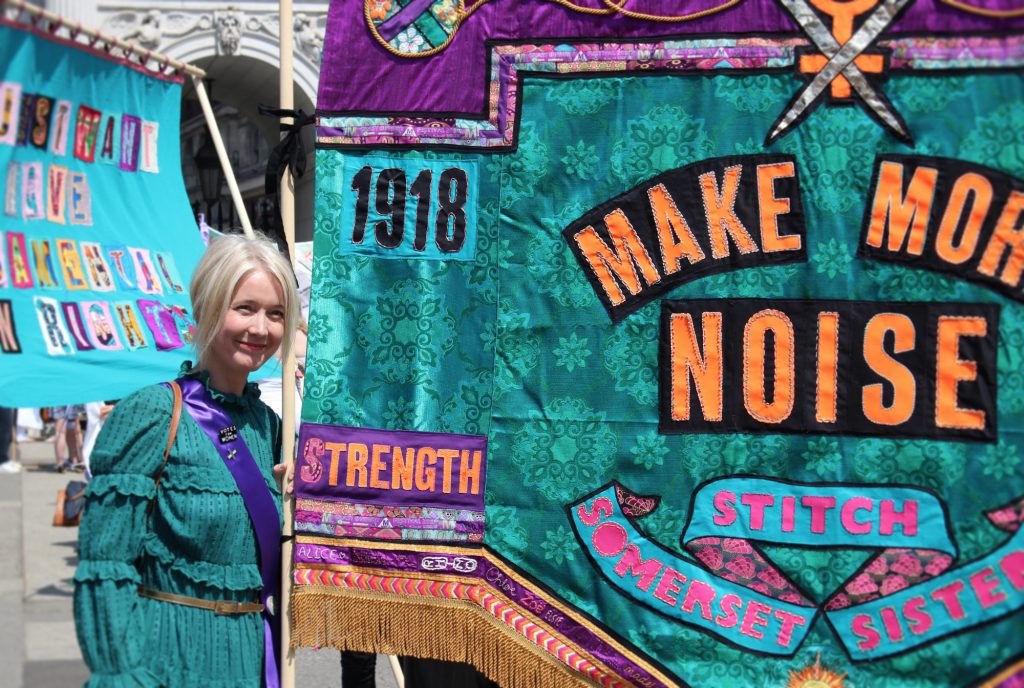 The coaches departed from Somerset early Sunday morning in order to meet and register at Marble Arch. Once gathered we were then directed to Hyde Park where a selection of banners were on display for the press and photographers, by this time the sun was high in the sky and the atmosphere was buoyant. The Somerset banners were to be positioned near to the front of the Procession, so we were led through the back streets of Mayfair, learning quickly how to manoeuver the banners around street signs and low trees, to get into position in Piccadilly. From there the Procession made its way to Trafalgar Square, where we were siphoned off so that Dorcas could be interviewed by Lauren Laverne and broadcast live on BBC 1.

This was a great moment to step back for a while, savour where we were, in the very heart of London and enjoy seeing the other banners that continued to stream past. A regular presenter from Glastonbury Festival, Lauren Laverne loved that the Strode Banner incorporated the festival wrist bands within the embroidery and the fact that it also glowed in the dark – a secret on such a bright day. 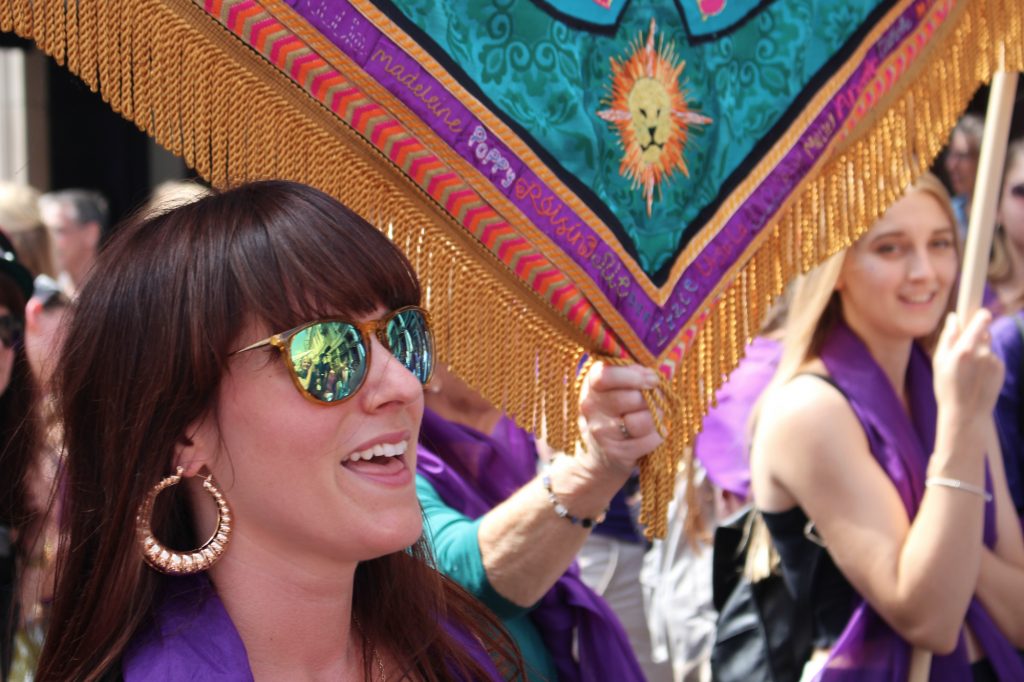 We then re-joined the Procession and made our way past Downing Street to Westminster Abbey and the Houses of Parliament where our journey was to end. Those involved now filtered gently back into the city on a wave of new hope, satisfaction and respect for the woman who had won our right to vote today. 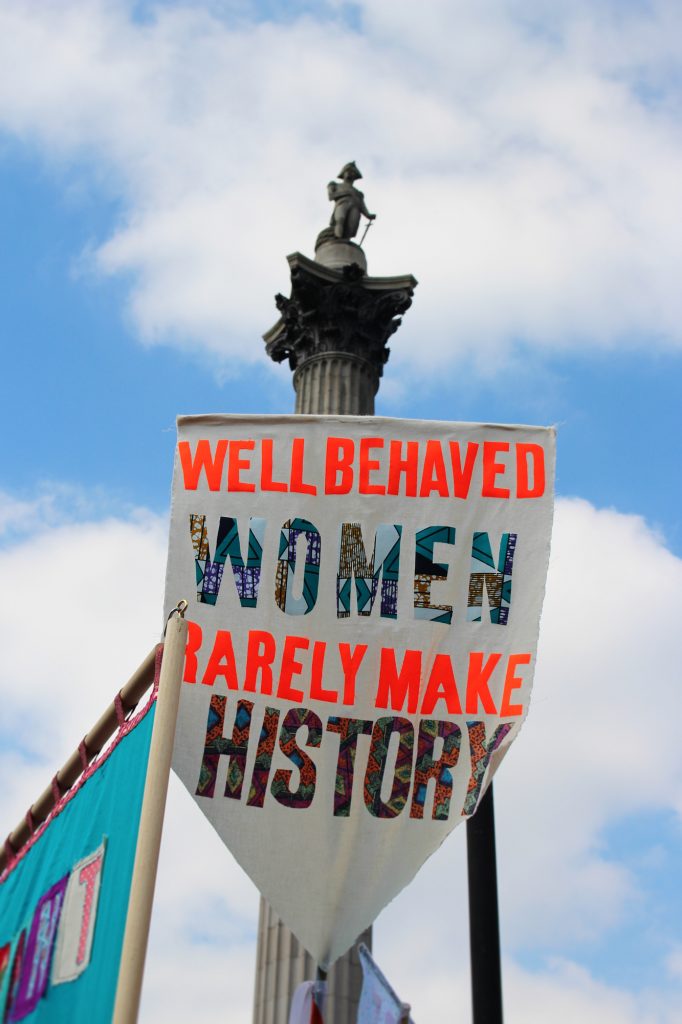 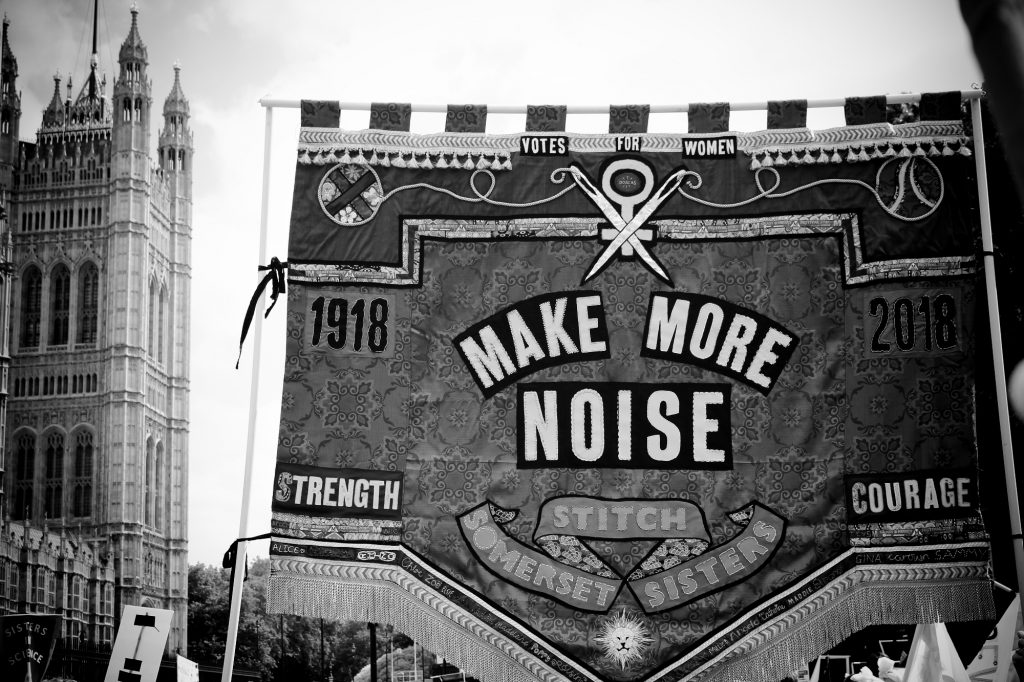 After its momentous outing in London the Strode banner is to be displayed alongside a rare original suffrage banner created by the Weston-super-Mare branch of the National Union of Women’s Suffrage Societies. Entitled ‘Two Banners, One Voice’ the exhibition runs from June 16th until September 2nd at the Somerset Rural Life Museum in Glastonbury.

It was an absolute privilege to join and witness the young woman and girls from Somerset taking it in turns to hold aloft their banners, between them they created a collection of beautifully executed textile art with a strong message. I’m intrigued as to when it will make its night time debut and get a chance to glow in the dark – Glastonbury Festival anyone?! 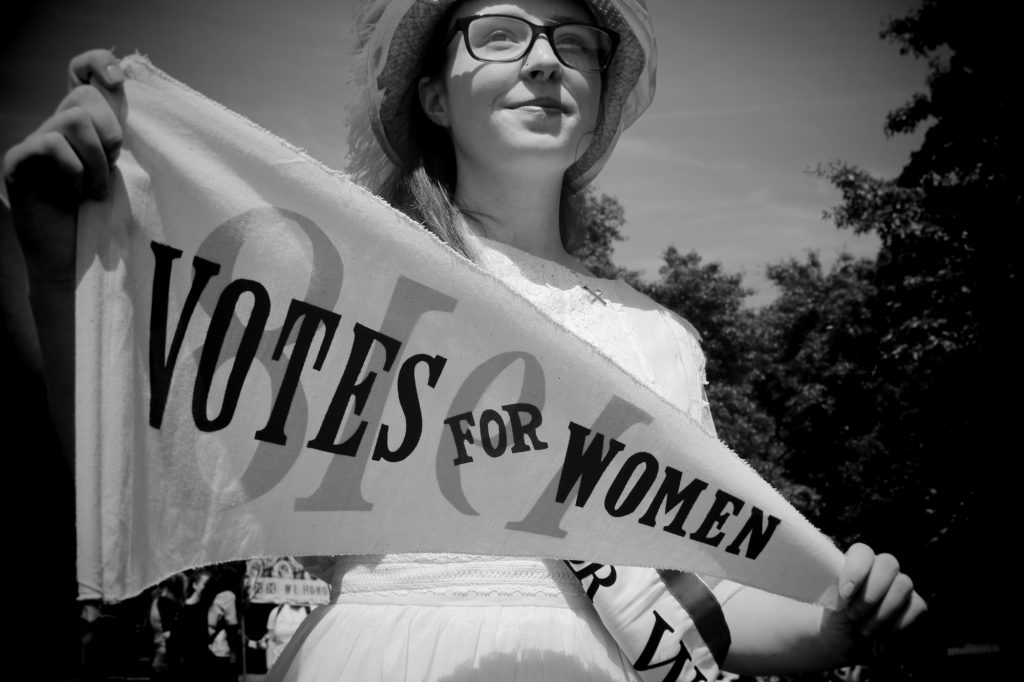 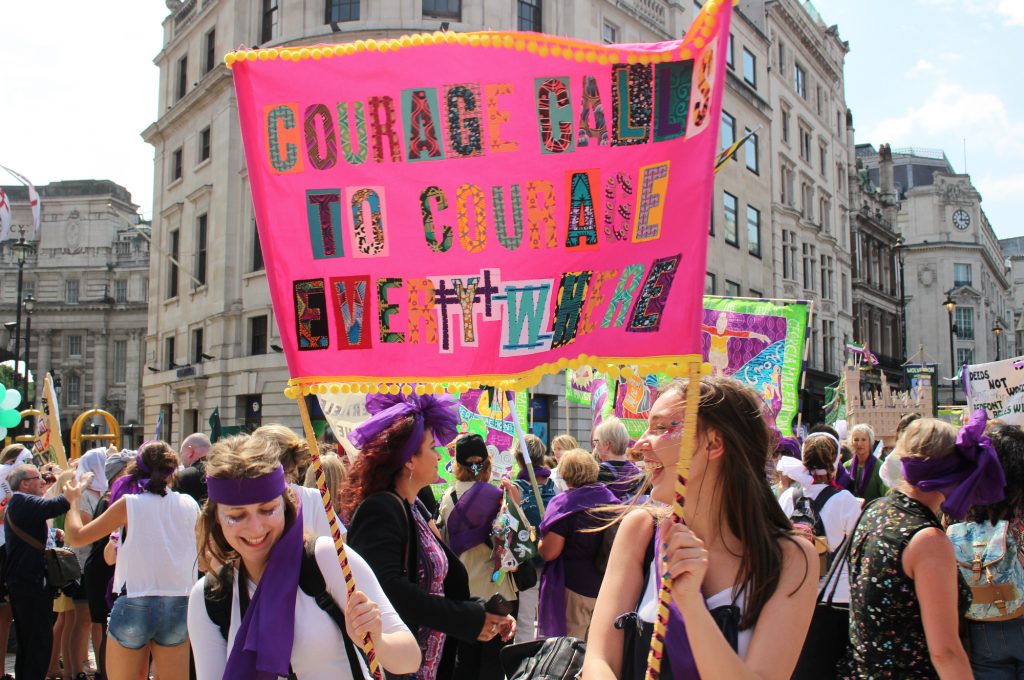 One Response to "MAKE more noise!"