On Sunday 10th June 2018 the streets of London, Cardiff, Belfast and Edinburgh will be awash with colour as woman and girls* from across the United Kingdom gather to form a living artwork. Commissioned by 14-18 NOW, and produced by Artichoke this celebratory event entitled Processions will honour the women whose perseverance and passion resulted in the 1918, Representation of the People Act which gave the first British women the right to vote and stand for public office. The June celebration does not aim to be a historical re-enactment of the original Suffrage marches but aspires to create a processional portrait of women in the 21st century.

One hundred artists and organisations across the UK have been invited to create banners inspired by those made by the original campaigners.  The Woman’s Suffrage movement was highly organised and created a strong visual marketing campaign, drawing on the craft skills of its members. They took great pride in the banners that they collectively stitched, appliquéd and embroidered from the fabrics they had domestically to hand, velvet, silk, brocade and satin resulting in the marches being colourful spectacles accompanied by singing and scented garlands – one procession led by Emmeline Pankhurst was an impressive four miles long and five women wide.

With London the focus for the majority of marches and protests it is easy to assume that the more isolated, rural areas were either forgotten or not engaged with the Suffrage movement. However, this was not the case and branches of the National Union of Women’s Suffrage Societies were formed countrywide. I was gratified to learn that the South West Heritage Trust has an original banner from Weston- super-Mare within its archive. Somerset women will also be present at the contemporary celebration in London on 10 June as Somerset Art Works is delighted to be among the one hundred organisations commissioned by Processions to create a modern day banner.

‘A banner is a thing to float in the wind, to flicker in the breeze, to flirt its colours for your pleasure, to half show and half conceal a device you long to unravel… Choose purple and gold for ambitions, red for courage, green for long cherished hopes.’ 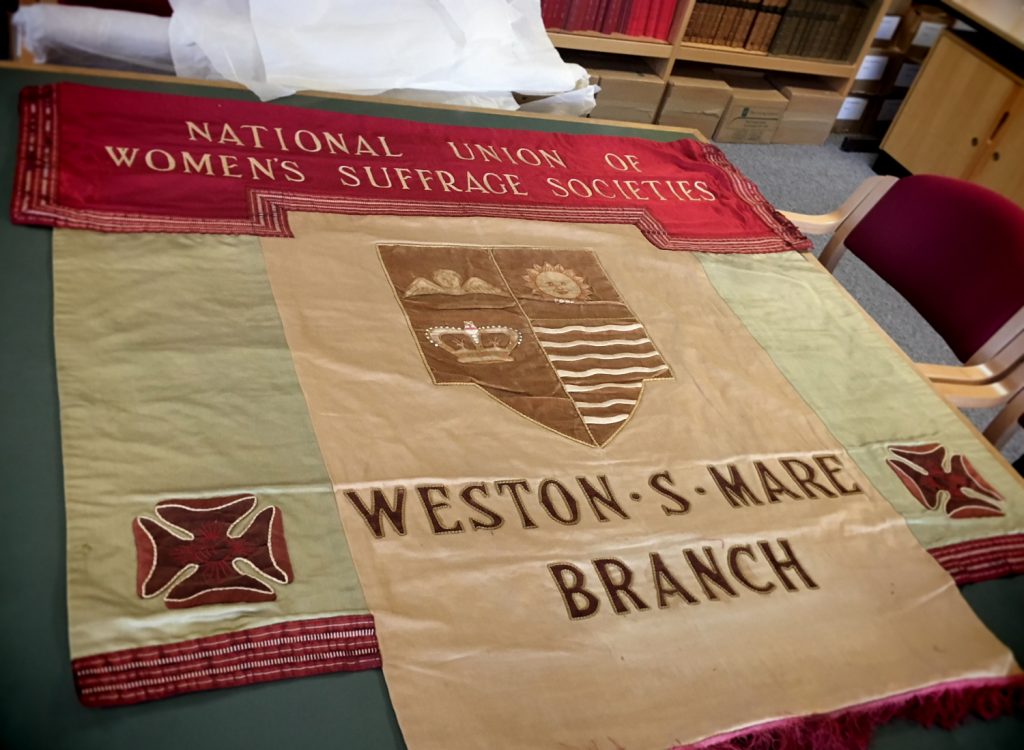 SAW has appointed sculptor and textile artist Dorcas Casey to inspire and facilitate banner making workshops at two Somerset colleges, Strode in Street and Richard Huish in Taunton, and also at Bruton School for Girls. Dorcas created the imposing black crocodile that featured in the recent MUSE: Makers in Museums project. She also fabricated from socks, bras, swimsuits and pool balls the iconic fairy tale horses crushed beneath Cinderella’s upturned carriage for Banksy’s Dismaland Castle. I am in no doubt that the banner she will inspire and entice from the students engaged with this project will be equally as dynamic, displaying a distinct voice for Somerset.

I recently joined her induction workshop with A level textile students at her former college in Street. Despite the session being quite short the students certainly made the most of their time and were incredibly productive. Dorcas presented a brief introduction to her work and the history of the suffrage movement and then set two creative tasks expressing slogans – pennant banners and badges. I was surprised how few opted for the badge making option but when quizzed the students declared that they were textile students and had been eyeing up the fabrics they wanted to work with from the colourful collection of scraps that Dorcas had brought along. 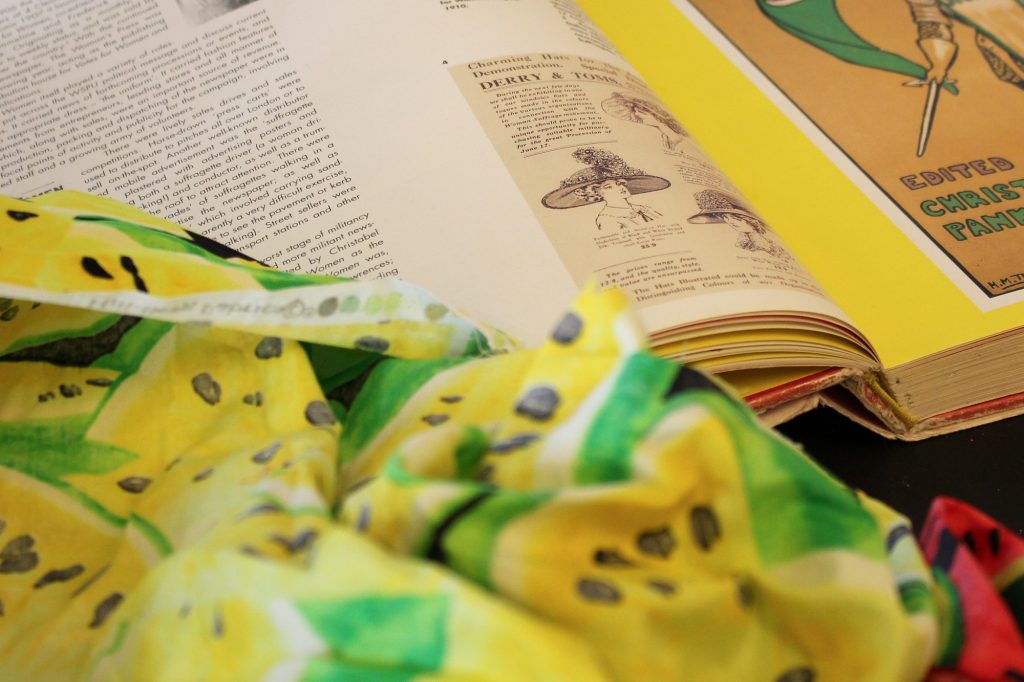 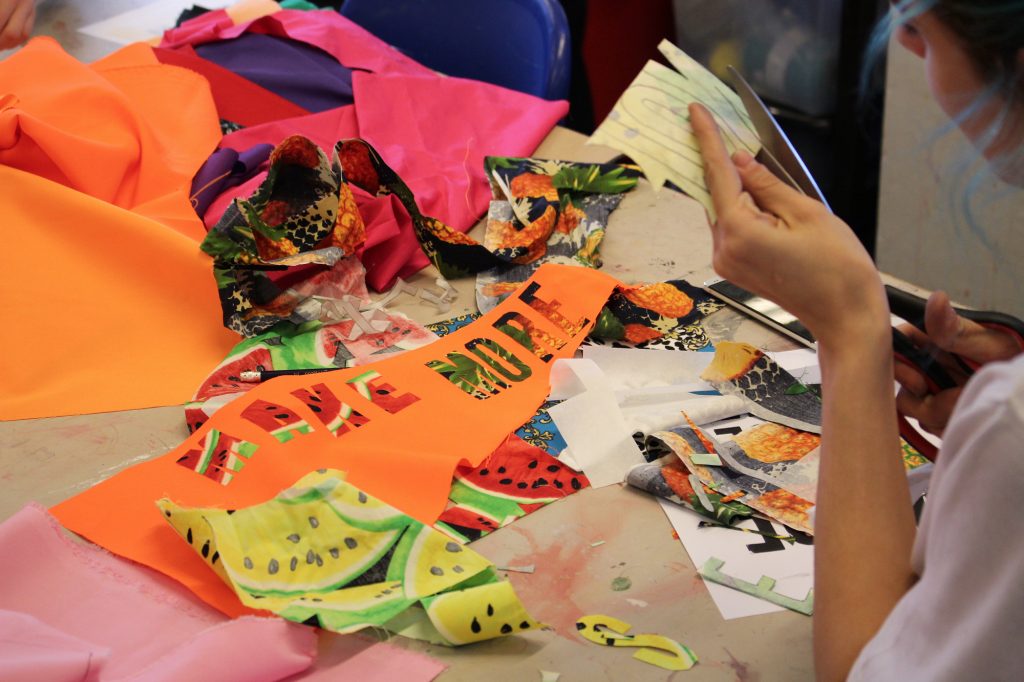 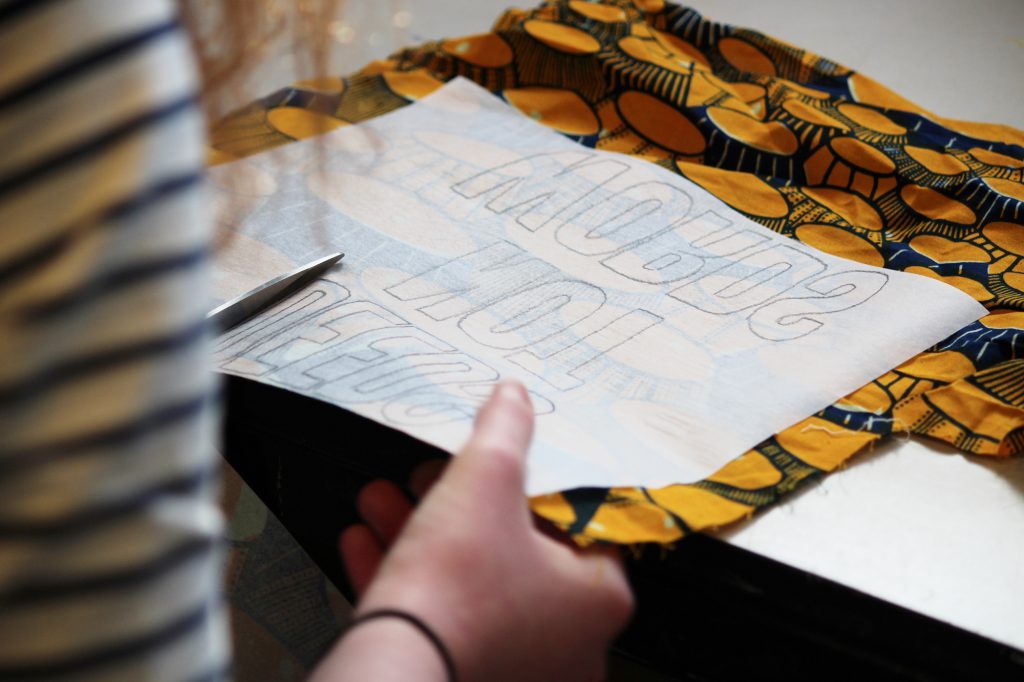 As the afternoon progressed colourful pennants quickly emerged and one of the students I spoke to explained how much the project meant to her and that one day she hoped to be a human rights lawyer. Another made a badge featuring Emmeline Pankhurst, pinning it to her top stating she was going to wear it with pride. Others expressed concern that the message today was about equal rights, not about swinging the pendulum the other way, which they felt was a danger, but gaining (still!) and maintaining a positive balance between the sexes. I am intrigued to see what slogan they collectively compose and assert in fabric. 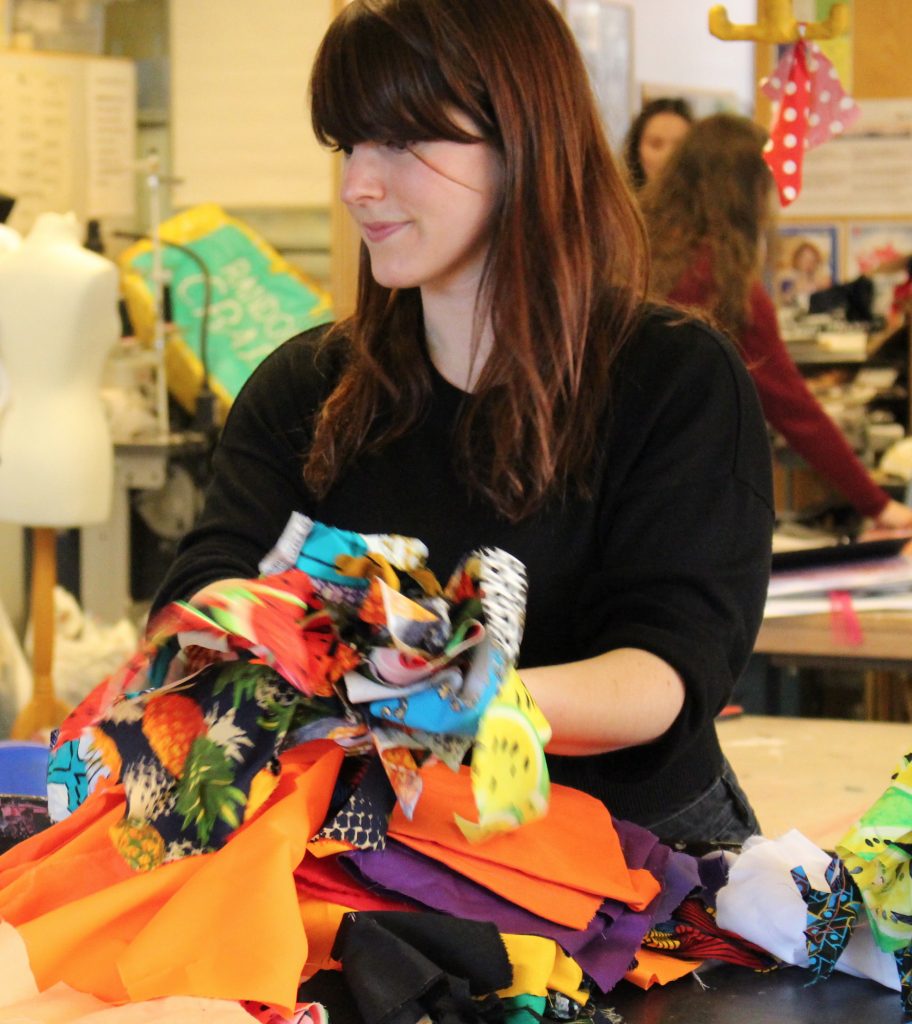 Dorcas herself is ‘…really excited about the Processions project and being part of a vast community of people all working towards such an important and ambitious event…’. Following participation in the Processions event in London in June, the Strode College banner returns to Somerset to be exhibited alongside the original Weston-Super-Mare Suffrage banner at the Somerset Rural Life Museum in Glastonbury over the summer.

Processions are also inviting you to get involved, make a banner and join the celebration. You can register as an individual or as a group via their website which explains everything you need to know – even handy tips on banner making, my personal favourites No 2 ‘Enjoy it – laugh when you make mistakes’ and No 10 ‘Celebrate your achievements with cake, wine, whatever makes you feel proud of what you’ve done together.’

I plan to join the procession alongside the students in June, I’m sure it will be quite emotive and very memorable. Participants are actively encouraged to dress in the unifying Suffrage colours of white, green and purple, and the banners as colourful as possible with a strong emphasis on craft and materials so no placards or cardboard signs ensuring that it evokes a sense of history and the woman it aims to honour and celebrate.

‘Let us go then, and make banners as required, and let them all be beautiful.’ Mary Lowndes 1909

*those who identify as women or non-binary