Earlier this week I entered the closed gates of The Museum of Somerset to step behind the scenes and meet with the artists and curators busy preparing for the forthcoming exhibition that is due to open this weekend. Entitled ‘MUSE: Makers in Museums’ the show will feature work by eight contemporary artists who, since May, have been working with small volunteer-run museums throughout Somerset and Devon.

The artists were paired with eight different host museums and each was asked to respond to the historic artefacts that were on display or stored within the archives. It is an ambitious project and to guarantee any successful outcomes, a proposal of this scale requires a strong supportive network alongside significant funding. The project was awarded more than £80,000 by Arts Council England and the Heritage Lottery Fund and is led by the South West Heritage Trust in partnership with Somerset Art Works, the Devon Guild of Craftsmen and the Community Museums Development Officer for Devon.

The results highlight the diverse rural and industrial heritage of the two counties and the craft skills that are practiced by modern artisans. Caitlin Heffernan’s delicate structures define the significant role of woman within Chard’s Industrial past, Jacky Oliver sought inspiration from the intricate plans used to guide Teignmouth’s ship builders, while excavations at Wookey Hole permitted artist Sean Harris to continue his artistic explorations into prehistory.

The museum was a hive of activity when I arrived, not only were the artists delivering and positioning their work ready to be hung by the museum team, but Somerset Film were on site, recording interviews with each in turn. I sat in while Jacky Oliver was being filmed and it was insightful listening to her discuss the thoughts behind her wire and enamel interpretations of the Morgan Giles drawings that were her key catalyst; she hoped that viewers of her work would now view his boat plans with fresh appreciation. 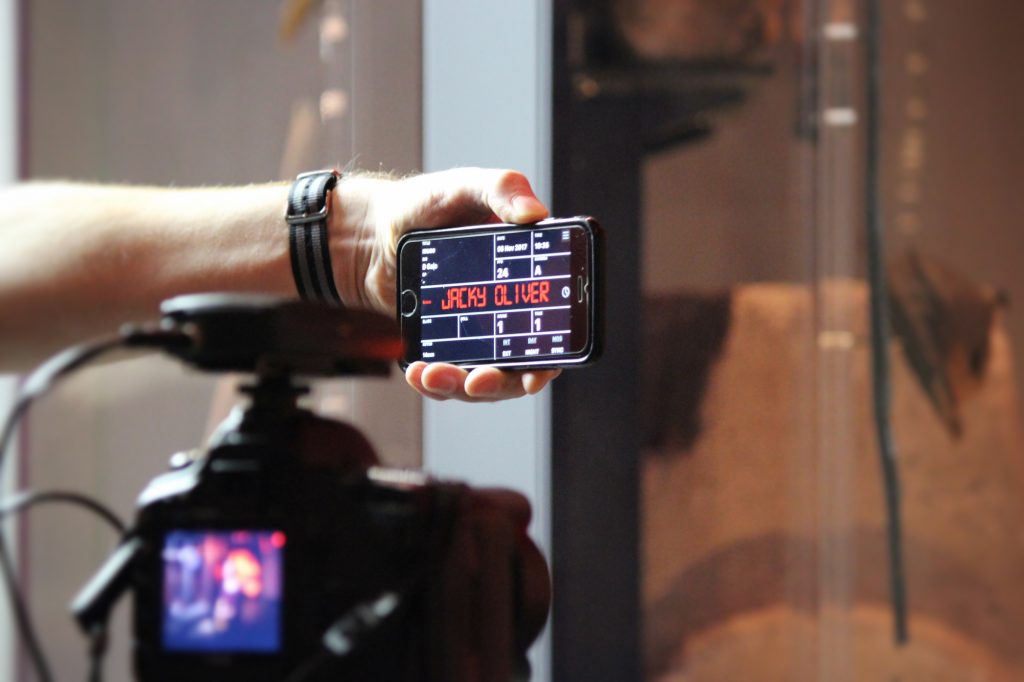 While the museum was closed to visitors the team focused on installing the work that was to be displayed in the public galleries. Thoughtfully placed alongside the permanent displays, I felt this was a refreshing approach and one that would potentially attract new audiences who may not seek out contemporary art or vice versa, and also encourage return visits to the museum. 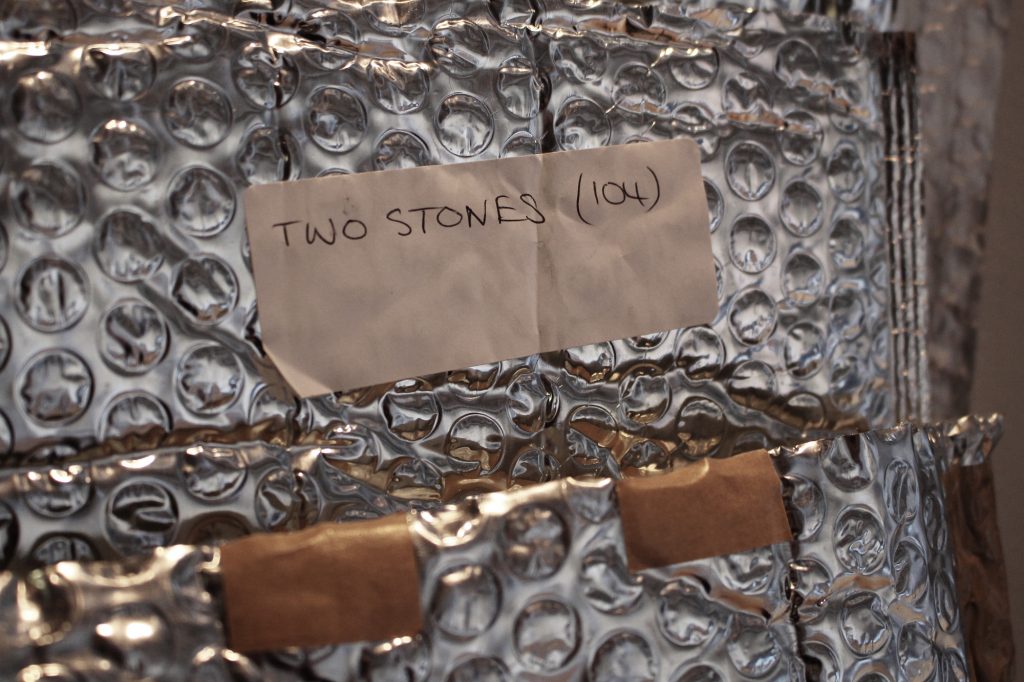 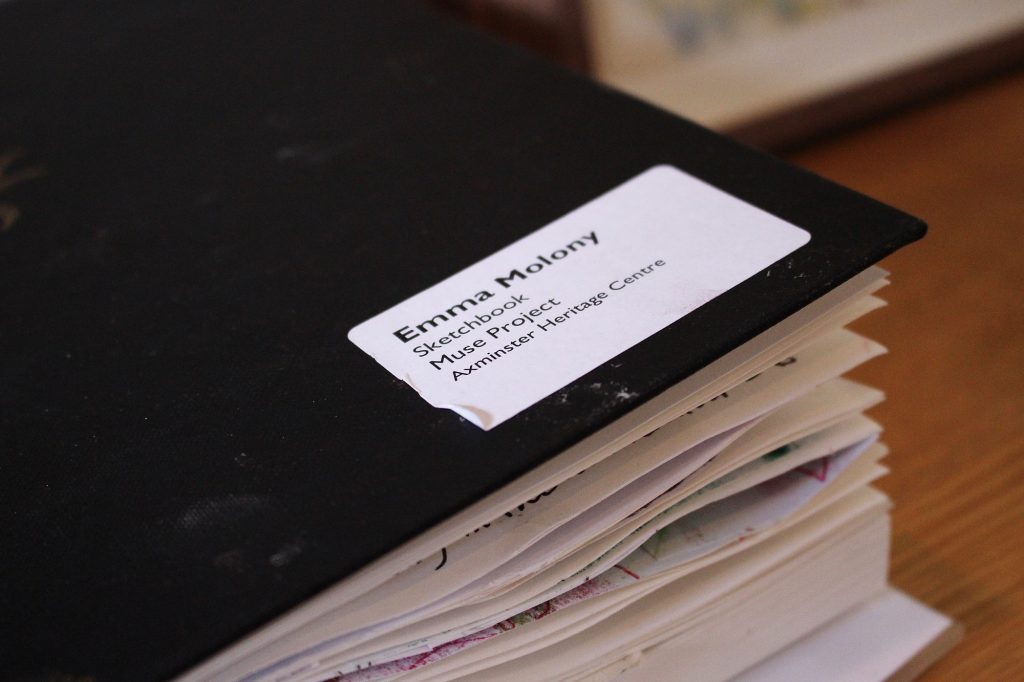 A collection of boxed and wrapped work awaiting attention in the Hammett room, a dedicated intimate gallery area.

There were some technical apprehensions about installing Taja’s larger ceramic pieces in the main gallery which the team knew once they had been resolved meant that they could relax a little. I’ve not seen these particular pieces so look forward to viewing them in situ from the mezzanine gallery. Dorcas Casey’s wonderfully black crocodile was also taking up residence in this area and while I was there Dorcas was diligently arranging and pinning her scales of jelly moulds. I must admit I am quite smitten with this striking creature as it is certainly a surprise to the eye, a true sense of the unexpected. I asked Dorcas ‘Why a crocodile?’ and she explained that it represents the hidden – the depth of artefacts stored behind the scenes and our history lurking beneath the surface of everyday objects. The whimsical, rabbit jelly mould caught her eye among the many curiosities at Bruton Museum and the others are from her personal collection. 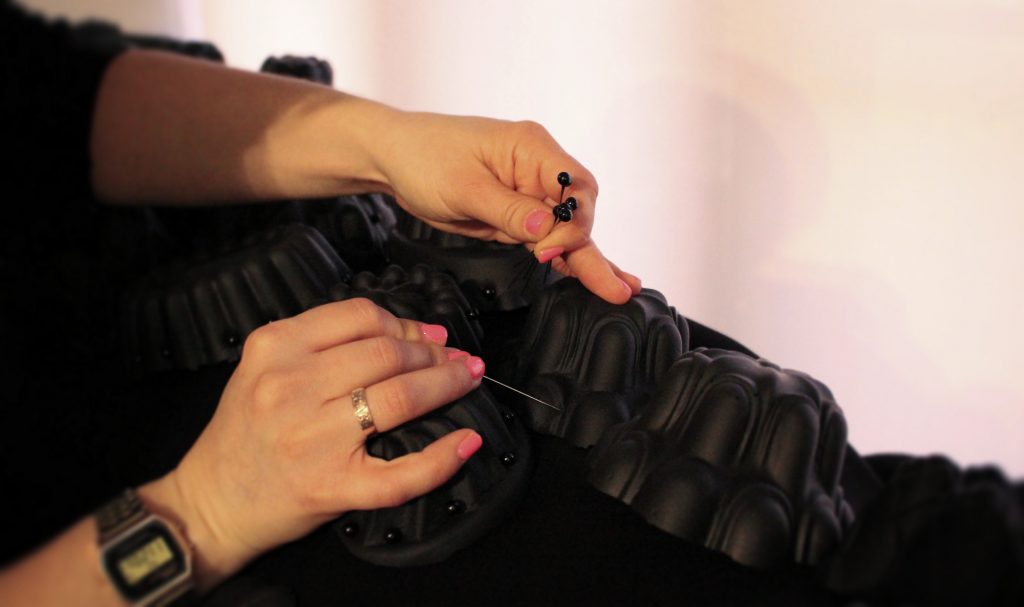 All the art works created were originally displayed during Devon Open Studios and Somerset Art Weeks at the participating host museums, this cumulative exhibition at The Museum of Somerset opens on Saturday 11th November 2017 until Saturday 3rd February 2018 and admission is free. If you would like to know a little more about the individual artists’ approach to working on this project and more about the historical artefacts that inspired their creative process do take a look at the projects dedicated on line journal MUSE: Makers in Museums. It was a privilege to view behind the scenes of this exhibition and meet with the talented, professionals involved, I thoroughly recommend a visit.

THE MUSEUM OF SOMERSET