Lytes Cary has proved itself to be a wonderful backdrop this year and last for artistic interventions. This September SAW hosted The Contemporary Craft Showcase as part of the ongoing theme of ‘A Landscape of Objects.’ The weekend aimed to highlight quality craftsmanship with a focus on nature and landscape. Exhibitors included Sophie Woodrow and Jane Bevan, alongside workshops and demonstrations by Andrew Kirby, Jessica Palmer and Flora Arbuthnott. Saw also commissioned West Somerset artist Lucy Large to create an installation in response to the theme and the open sided barn building where it was to be sited.

I met with Lucy in her garden studio earlier in the year to catch a glimpse of her work in progress and her thoughts on the project; she was making the most of the August sunshine and was busy on the lawn stitching a number of oversized mesh umbrellas. 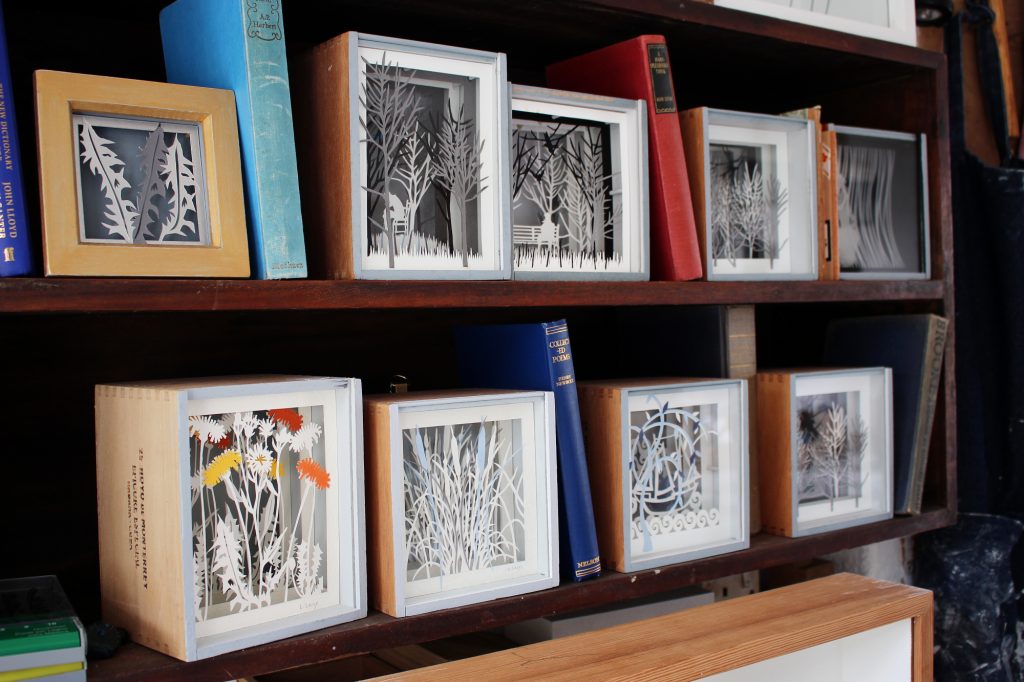 Up until recently Lucy’s sculptural forms made from carefully hand cut paper or ‘sketched’ with wire have been created on a smaller scale and often kept within the confines of a box frame. She studied sculpture at Camberwell College of Art in London, graduating in 2001 with a first class honours. Her lecturers often referred to her work as theatrical and too prop like, which could be viewed as a negative in the world of sculpture as Lucy’s forms could easily be misinterpreted as too flighty and transient when compared to the more traditional, accepted methods of casting heavy bronzes or working with stone. However, placing objects within a frame, plays on this theatrical approach and gives Lucy direct control from which direction the work is viewed and conjures to mind the models created by set designers. 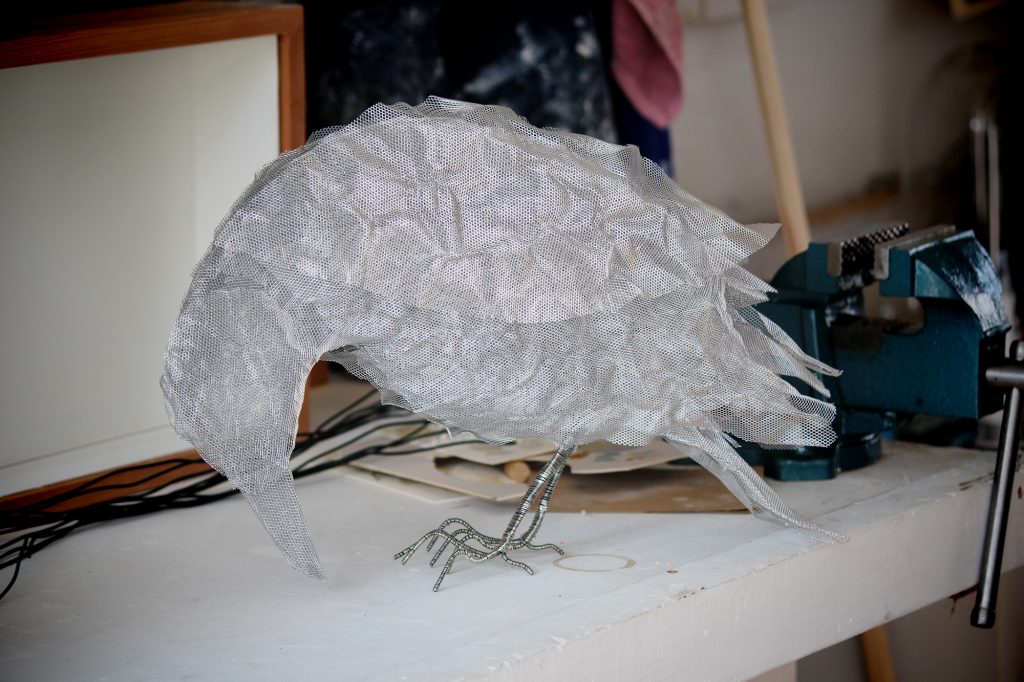 Last year Contains Art provided Lucy with a ‘bigger box’ when they invited her to exhibit within their container gallery in Watchet. Lucy rose to the challenge and manipulated from metallic mesh a scene of domestic furniture, looked over by a solitary corvid. SAW wished to encourage Lucy to develop her artistic practice further still and so offered her the open barn as her next box.

Lucy’s initial response was that her Corvids would naturally play a starring role, the concept of the umbrellas was to recall memories of shelter from rain in an English summer garden and harnessed the distinctive design aesthetic of everyday domestic objects. Shelter is such a basic need for us all and one many of us take for granted until our personal circumstances may change. The barn was built to provide valuable shelter and looking up into its stunning roof structure, Lucy realised she wanted to control the view of her work from below. 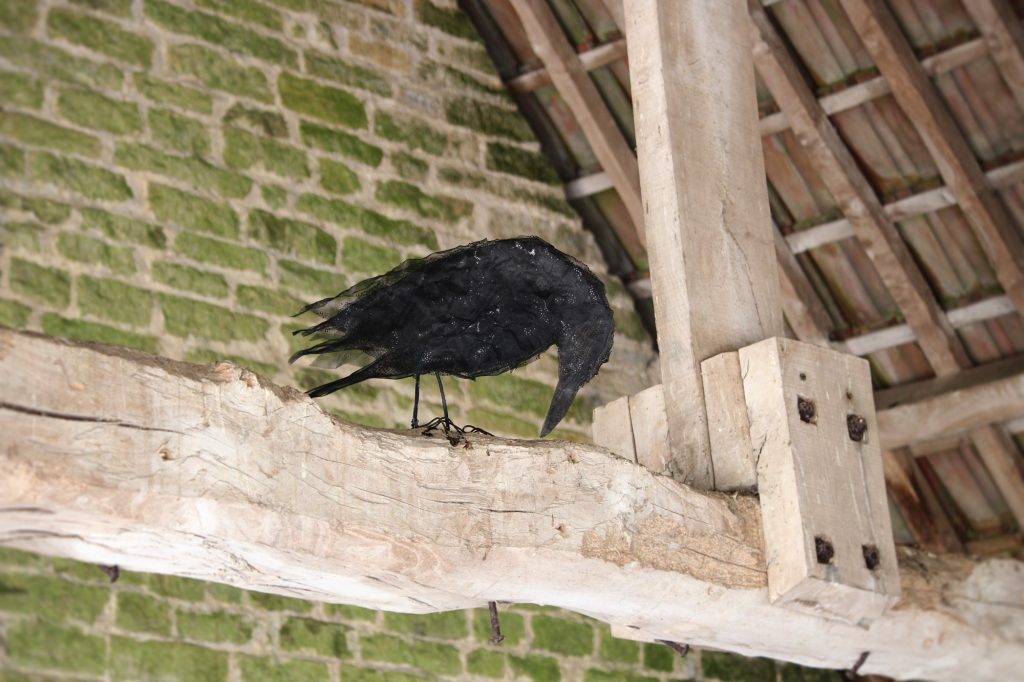 Just before she was due to install the work I received an email explaining that her thought processes had taken her on a different creative journey than planned and there were now no umbrellas in sight – they just didn’t work how she had envisaged.

I caught up with her once more just as she was applying the finishing touches. There was an explosion of colour and the domestic objects suspended in the rafters gave one the sense that you were looking into an attic with no floor, where the hovering black birds were waiting to pick over the choicest objects a little like a mischievous game of pick up sticks. 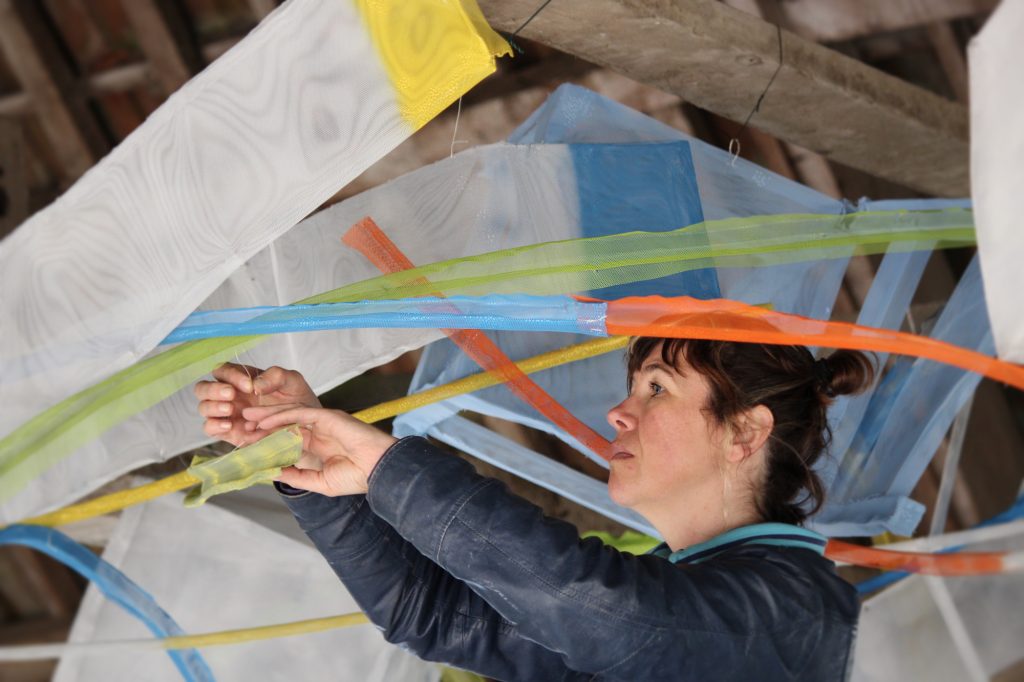 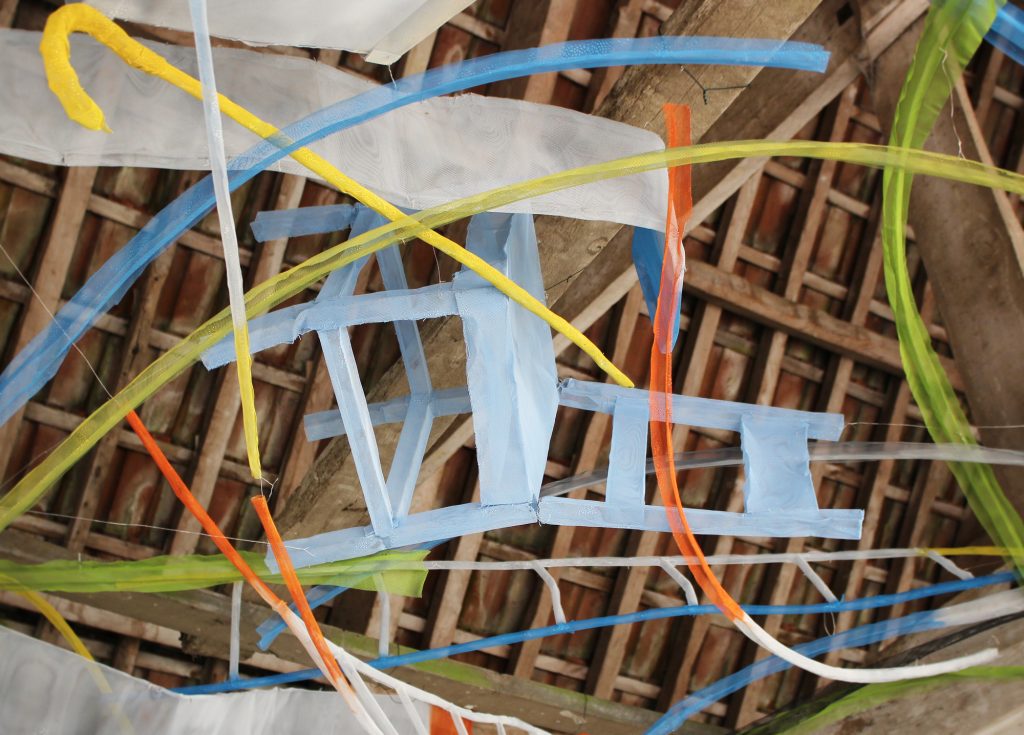 There is no doubt that the scale of the barn was a daunting space to respond to, but Lucy’s gentle intervention is refreshing to the eye and is not overwhelmed by the building. After Lucy had left, and just as I was packing up to head home a young family was sitting underneath the birds and the two children were singing nursery rhymes to them…

Lucy’s installation is accessible to view throughout the festival and beyond! You need not pay admission to the property as the barn is situated just by the car park. If you are National Trust members I recommend you take your wellies as there are some great family walks to be explored with the tearooms to take advantage of afterwards.

*Installation will remain in situ until the end of October.