GUEST POST BY CONTEMPORARY ARTIST & CURATOR JON ENGLAND: Fresh from his travels in Russia we invited Jon to tell us about his current exhibition and the journey that led him to St Petersburg.

When my photograph of the railway station at Żagań caught the attention of WWII prisoner of war, artist and architectural illustrator, Edward (Ted) Arthur Milligan, I never could have conceived where our subsequent meeting, friendship and collaboration would take me.

Part of my exhibition ‘Afterglow’ at the Brewhouse, Taunton in 2009, Żagań was the scene of the infamous ‘Great Escape’, but for Ted it had another significance. He had viewed it through the timbers of a crowded rail-truck shared with over 60 sick and exhausted prisoners. Their camp, Stalag Luft 7 at Bąków had lain directly in the path of the ‘Great Soviet Offensive’ of January 1945 and in the early hours of the 19th they were marched at gunpoint away from liberating forces and into the harshest Silesian winter for many years.  After an horrendous slog of 240kms in 18 days with blizzard conditions and starvation rations they were herded into rail trucks at Złotoryja before spending many hours shunted into the sidings at Żagań without food, water or sanitation. 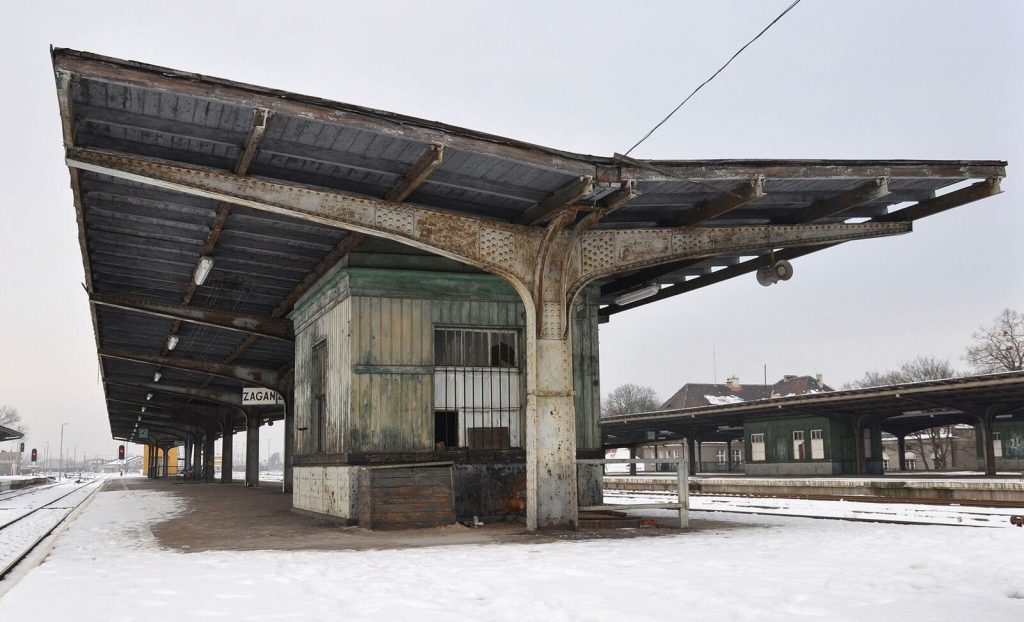 Remarkably his artworks survived the march and on our first meeting I was presented with copies of his entire war diaries and around 80 drawings made both at Luft 7 and his subsequent camp at Stalag 3A at Luckenwalde, south of Berlin.  An instant friendship became a mutually productive collaboration with Ted battling ill-health to produce around 30 new drawings based on his memory of the marches. They featured in our exhibition, ‘POWWOW’ at my studio, ‘Hut 27’ in 2010 and in a high-profile exhibition at Shepton Montague, a few months after Ted’s death in 2011.

At the same time Ksenia Afonina, President of the Russian Speaking Society in Cambridge, was beginning to investigate the archive of her grandfather Pavel Afonin, a wartime artist and ‘Honoured Architect of the Russian Federation’ who had fought all the way from Moscow to Berlin. A mutual contact made the connection and although sadly the two artists never met, in many respects the narrative for a joint exhibition wrote itself. 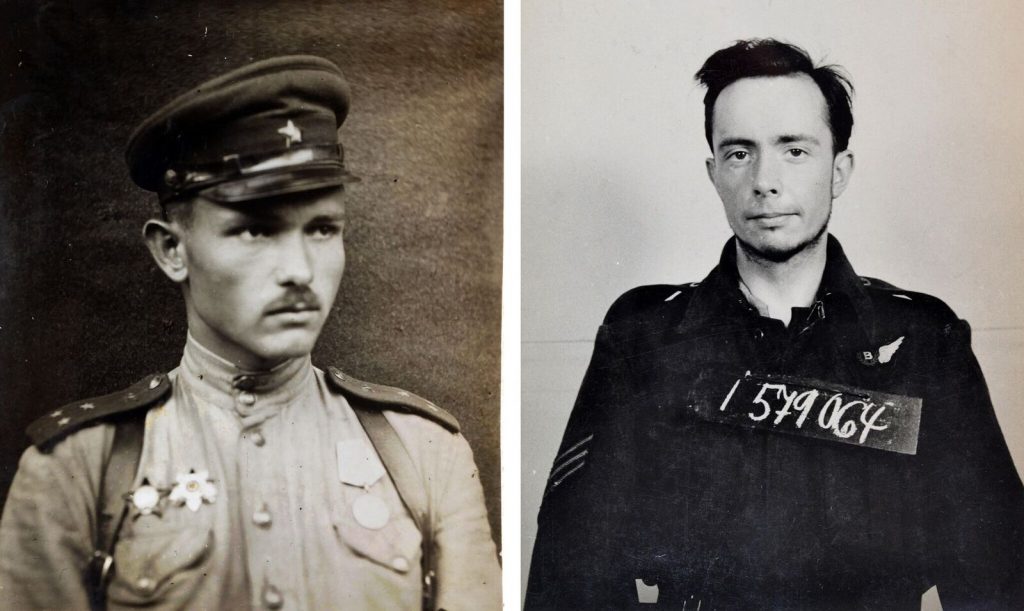 Born just a year apart, Pavel reached the age of 90, Ted just 5 days short, each produced remarkable bodies of wartime artworks but also went on to have distinguished careers in architecture. As the Germans were marching their prisoners over bridges ‘primed’ for demolition, Pavel’s Engineer Battalion were tasked with reinstating the crossings and so they moved through the same landscapes just days apart.

Although their experiences of war were very different, each had huge uncertainty about their fate, which added great importance to their ‘need’ to record the faces of the personalities who shared their experience. Pavel, a third-year student at the Moscow Institute of Architecture and already a skilled draughtsman worked quickly in the lulls between battles, often producing two portraits, giving one to the subject to send home. They were a proof of life and in many cases the last visual record of an individual.

When Ted was shot down on his first mission he became powerless to affect the war, but his diary represents an exercise in positive mental attitude and the power of creativity in the face of adversity.  His paintings of the landscapes without barbed-wire were an obvious form of escape whilst he credited the subsequently famous abstract painter Adrian Heath as both inspiration and mentor. 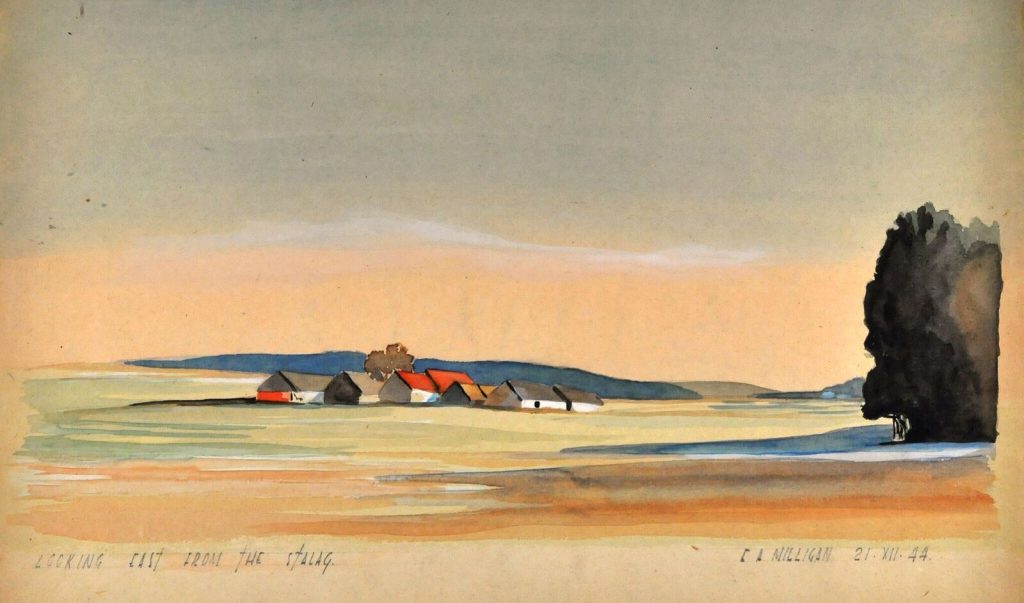 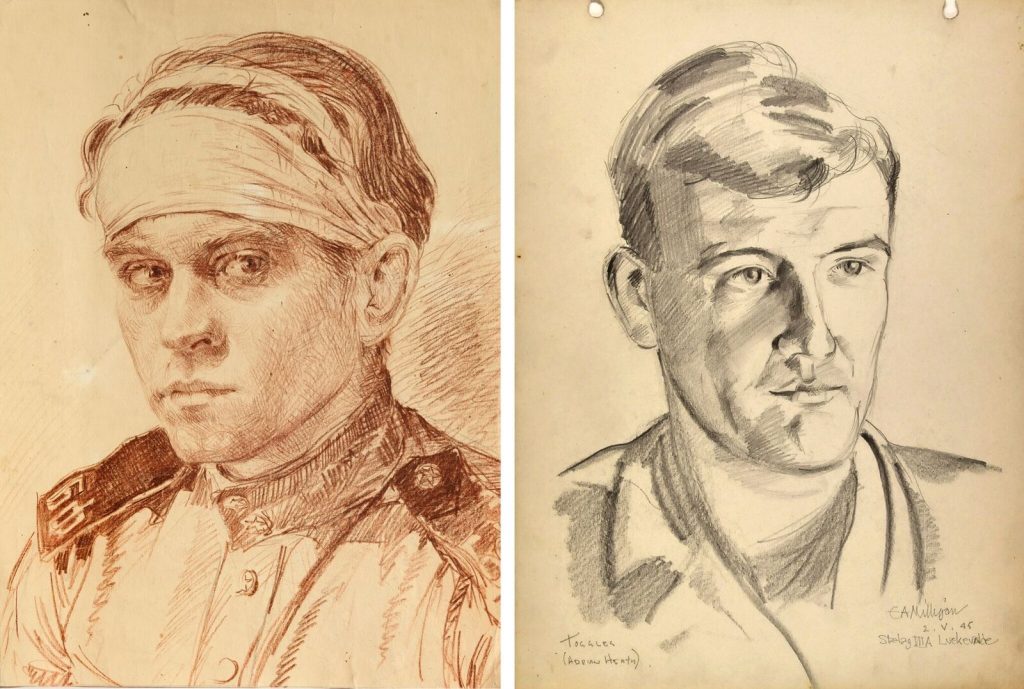 In 2016, Ksenia and I co-curated the exhibition ‘Dual Perspectives’, at the Moscow Architecture Biennale and Moscow Institute of Architecture. On the back of the success of that presentation we were invited to tour the exhibition to the St Petersburg State University of Architecture & Civil Engineering. The oldest and most prestigious architectural institute in the country, it comprises around 10,000 students studying many associated disciplines. 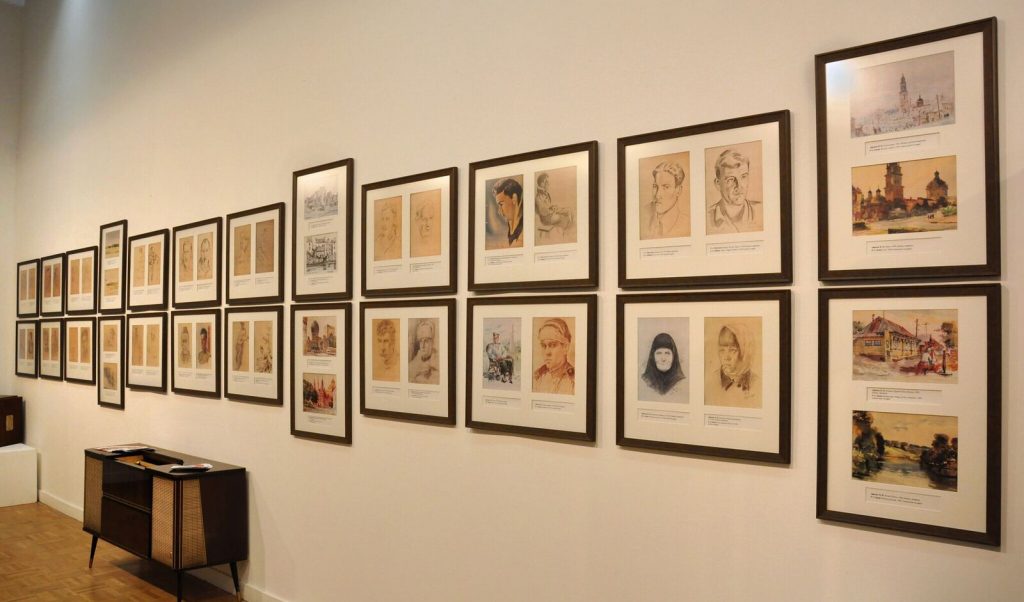 The 4th May 2017 will live long in the memory with the current exhibition featured by three TV channels and a host of other press that was both exhilarating and exhausting. The exhibition officially opened at 2pm with speeches from British Consul General in St Petersburg, Keith Allan; Rector of the University, Professor Eugeny I. Rybnov; Head of the St Petersburg Committee for Science and Higher Education, Mr Andrey S. Maksimov; Professor of the University and survivor of the Siege of Leningrad, Vyachaslav V. Inchik, Ksenia and myself. The common humanity of the work was a unifying theme, the pleas of Vyachaslav for peace and unity carrying the greatest weight of all. 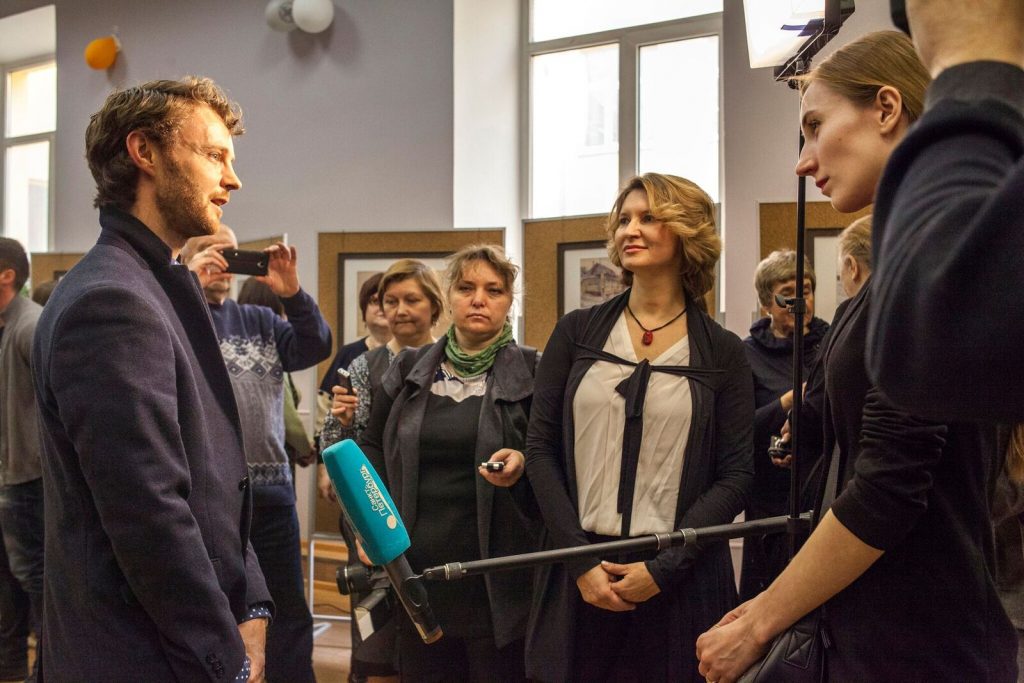 In 2001 Vyachaslav dedicated a room of his apartment in the historic Salamander House as a museum to the siege and to his aunt Vera Shestakova, one of the ‘voices of the siege’. Showing rare foresight for a boy of 13-15 and at great danger to himself, he peeled down and kept posters for the concerts and shows that continued amid desperation and depravity. The room is also filled with original artefacts such as the black disc radio, family photographs and items belonging to Vera, most pertinent of all was the daily ration of 125gm of bread (itself often bulked out with sawdust) set upon the table.  It was my honour to be his and his partner Tatiana’s first British visitor in those 16 years.

Salamander House, once the home of Vera Shestakova 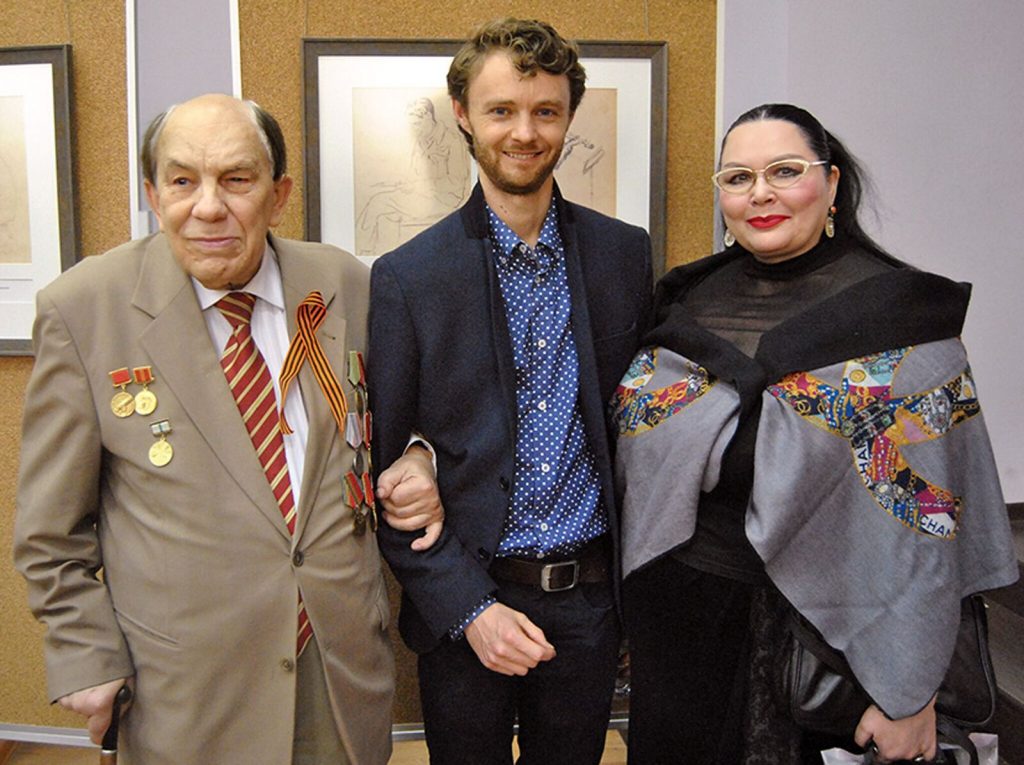 Jon England with Vyachaslav and Tatiana

The effect on the city is defined by what was not burnt; the easels in the art school and the trees in the Summer Garden; art and nature the last remaining solaces amongst a blockade of 872 days that claimed nearly one million lives with as many as 10,000 people in a day dying of starvation and cold. This history is in obvious contrast to the generosity of my hosts, never allowing a plate or glass to be empty. Tatiana, a voluptuous singer is a woman so exuberant that every tea-cup (served between bars of song) was filled to the point of overflowing into the saucers.

On several occasions through the week I took over the students’ English classes to present both the exhibition and my own work with great responses to both. It was hard for them to comprehend that Ted could have studied for the first part of his R.I.B.A architecture qualification in a POW camp, especially given the situation for Russian prisoners of whom nearly 60%, a staggering 3.3 million died in captivity. After their ‘liberation’ by Russian forces on 22nd April 1945, Ted visited the Russian compound and saw the altarpiece which prisoners had created with wood and scraps of foil and glass, he recorded it as his ‘most impressive sight’ and in the conditions, being ‘more impressed than if he had entered the Sistine Chapel in Rome’.

From my (generously loaned) apartment with its stunning views over Peter the Great’s Summer Palace and the Neva River, I also witnessed a quite unnerving sight; waves of military aircraft overhead and then dozens of armoured cars, tanks and missile launchers rolling up Kutuzova Embankment. Branded with the black and orange ‘Victory’ ribbon of St George, this rehearsal for their 9th May parade was a stark reminder of the context in which our exhibition was presented and reinforced the question that most troubles me in my work. Where does commemoration end and propagation begin? 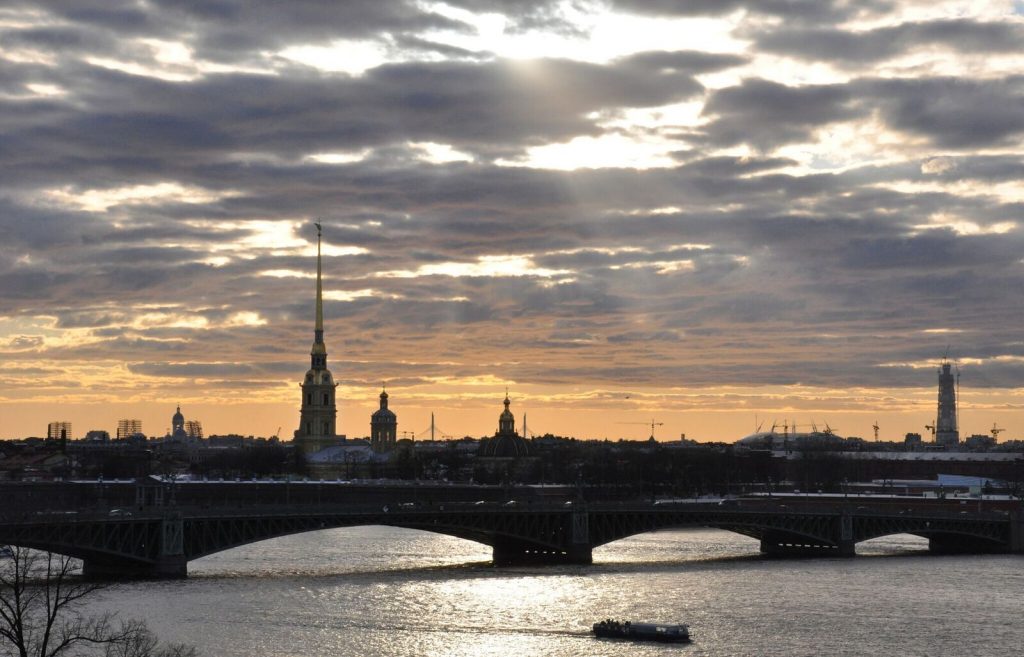 The view of the Neva river

What the warmth of my welcome also underlined however was the importance of cultural exchange in highlighting that which unites us. The SAW project to bring plein air painters from the Artists Union of Saint Petersburg to Somerset in August will be one more strand in this international dialogue.