Since attending the initial ‘spark meeting’ that took place last May I have been interested to see how this pilot project progresses and even diverges, and whether the aims aspired to then have been captured by the core artists now involved. The idea was and is to create an alternative, imaginary art school for the widely dispersed creative community of Somerset. Taking their guidance from SAW’s Programme Associate, Zoe Li, and lead Artist Anna Best the artists are Fiona Hingston, Isobel Adderley, Natalie Parsley, Jenny Graham, Jon England and Sue Palmer. All bring a wide range of individual expertise and knowledge to Prospectus and all have joined with an open, questioning mind and the aim to collaborate.

Last week the group were able to fulfill one of their major aims, that of occupying a ‘closed’ creative space, as Huish Episcopi Sixth Form College in Langport had very generously and trustingly allowed them access to the art department for five full days during the Easter Break, and I was invited to join them on their second afternoon.

When I arrived the group had just finished a workshop lead by Dorset based artist and art therapist Mary Caddick and were having lunch, informally discussing the morning’s events and what the afternoon held. Prior to their residency the group had planned a schedule to make the most of their time, but a quick group chat saw the group honestly airing the shared opinion that perhaps they were trying to squeeze too much in, that there wasn’t enough making and too much time was being spent on talking. They were all itching to create and get their hands on the equipment readily available, particularly the colour photocopier! With this in mind it was great to see how quickly this was turned around and facilitated by the presentations and making requests set and previously planned by artists Sue Palmer and Isobel Adderley.

Sue Palmer introduced the group to her work as a collaborative artist, creating live performance for events such as the B Side Festival. She also works with sound and moving image and showed the group a short film inspired by the untimely death of a blackbird that quietly highlighted the cyclic patterns of time and nature. After her presentation the group answered a number of questions but were requested not take too long considering their answers and to write freely – ‘Is there anything that you relate to in the things that I make or the things that I have shown you?’ and I particularly liked her honesty when she asked ‘Write about what you thought about when you drifted off.’ 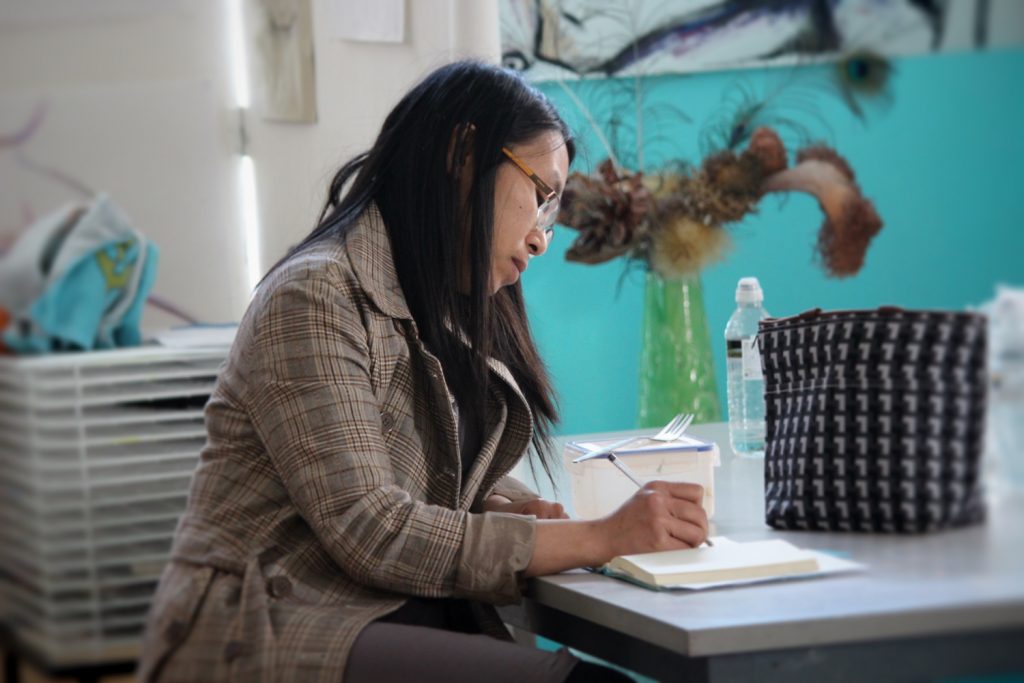 The group then highlighted the lines that held the most impact. Sue then set the task of working either individually or collaboratively to create something that was to be given away, and all without falling into idle chit chat, to stay quiet and focused.

I was surprised by the groups’ quick response, it’s all too easy to think one has the leisure of time, to carefully consider your ideas and processes before initiating the act of making. Yes, there was a couple of hesitant thoughtful minutes but after their earlier discussion all were keen to make and they only had half an hour. Jenny immediately jumped up to relocate the small printing press and began working with some dandelions and daisies that she had brought in with her, Isobel began stitching paper, while Fiona and Natalie headed to the colour photocopier. 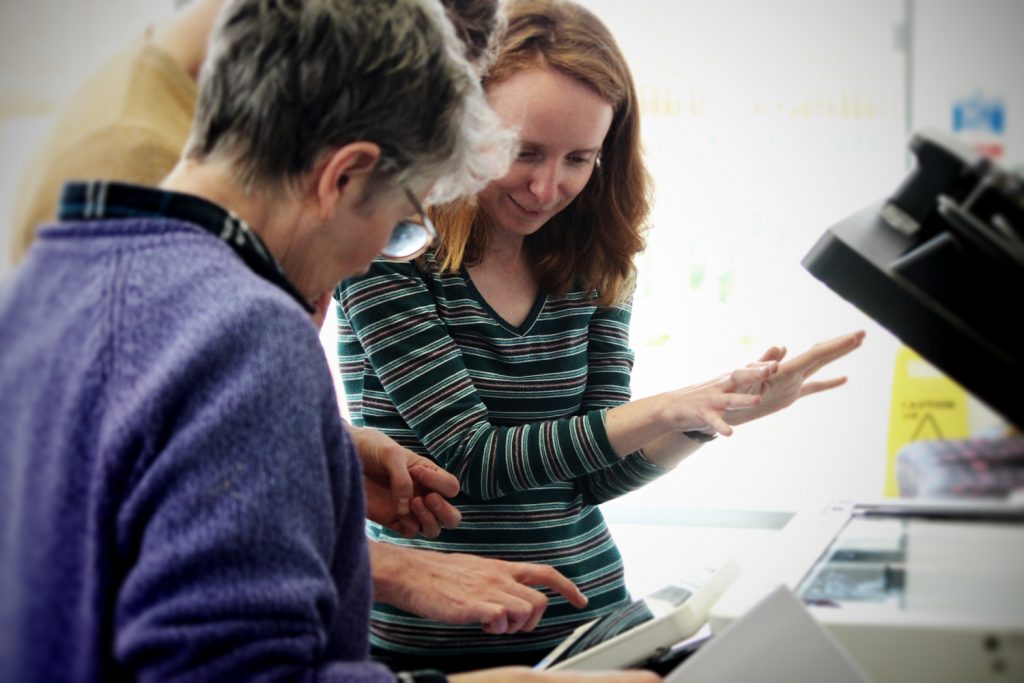 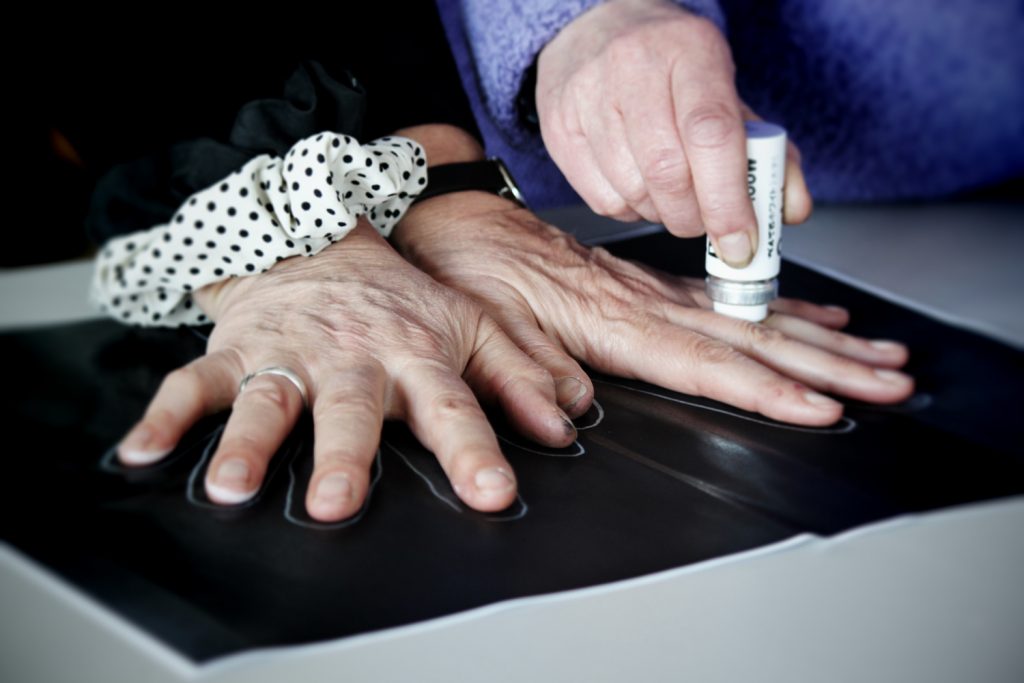 Inspired by a similar experience of a bird flying into a window, Fiona set about recreating the ghost imagery left by a bird’s ‘powder down.’ The colour photocopier didn’t quite prove to be as co-operative as she had hoped which made her quickly rethink and switch to drawing around the hands of the other participants. I think the result, pictured below, is quite stunning in its simplicity and for such a short burst of creativity is an idea that could easily be explored and developed more fully. 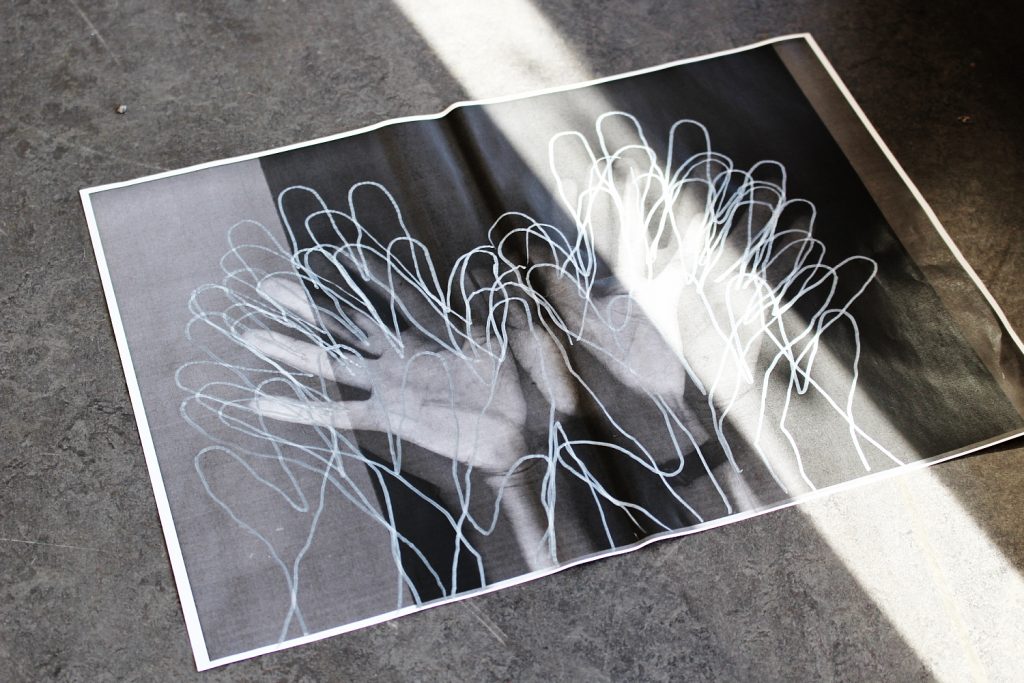 It was then Isobel Adderley’s turn to introduce the group to her work and then present them with a task. Having recently graduated from a fine art degree at Goldsmith’s her final show incorporated film, dance, yoga and performance to portray her artistic interpretations of geological strata, morphing static rock into liquid molten motion. 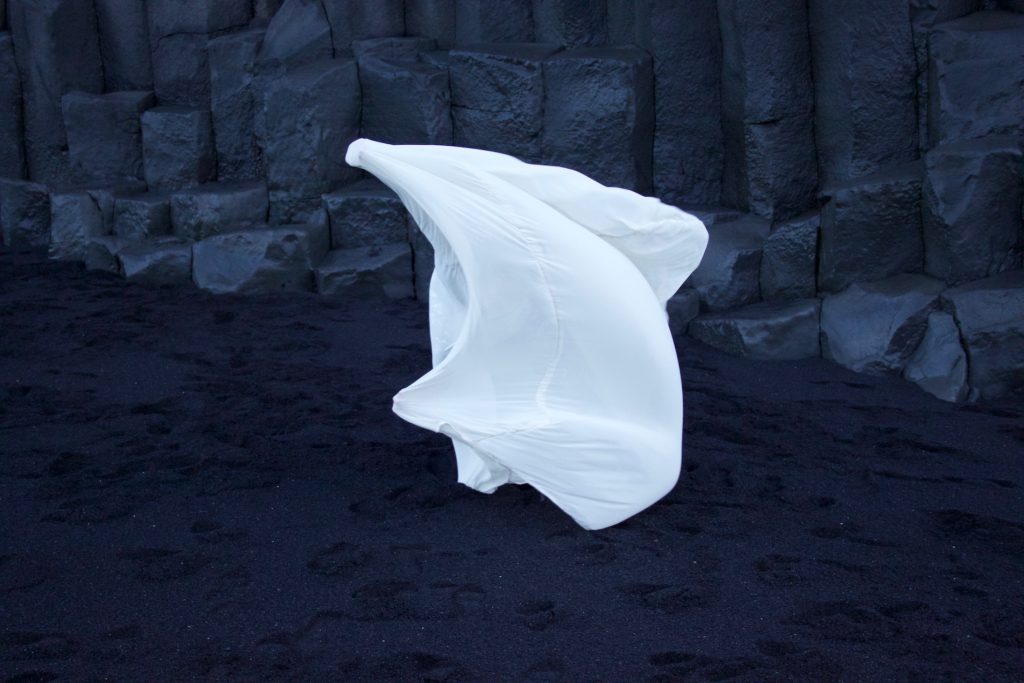 Isobel’s workshop requested the artists to consider the idea of repetition as a method of making a final piece – Richard Long’s Walking a Line was cited as inspiration. It was also suggested that the repetitive action could itself be viewed as a performance if desired, whichever avenue they chose to explore the artists had no longer than one hour to respond.

With the images of her film piece strong in my mind my immediate response was one of ‘oh my!’ I’d be too reserved to suddenly start some kind of contemporary dance routine, and so it was reassuringly revealing to observe how the group embraced the task and brought it into a realm they too felt comfortable with. Some headed off outside and I stayed as ‘audience’ to see how Sue, Jon and Fiona responded.

Jon initially had his own idea to start shredding and playing with paper but when he caught sight of Fiona repetitively chalking crosses on the school room floor he joined her. Inspired by Rauschenberg’s Erased de Kooning Drawing, Jon began rubbing out Fiona’s marks, except his finger tip accumulated the chalk dust and so the crosses were smudged creating a new texture. The two sat in silence across from one another and became unaware that they too also became part of Sue’s performance. She had set the tap in the room to drip water in alignment with the day’s tides, and the regular drip, drip became their metronome. 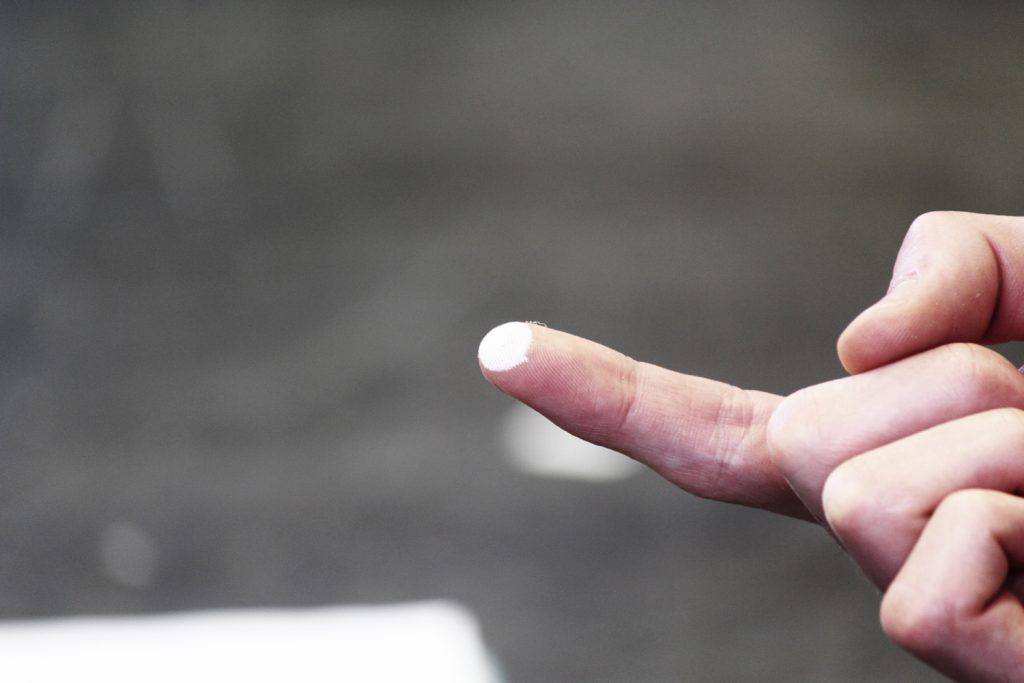 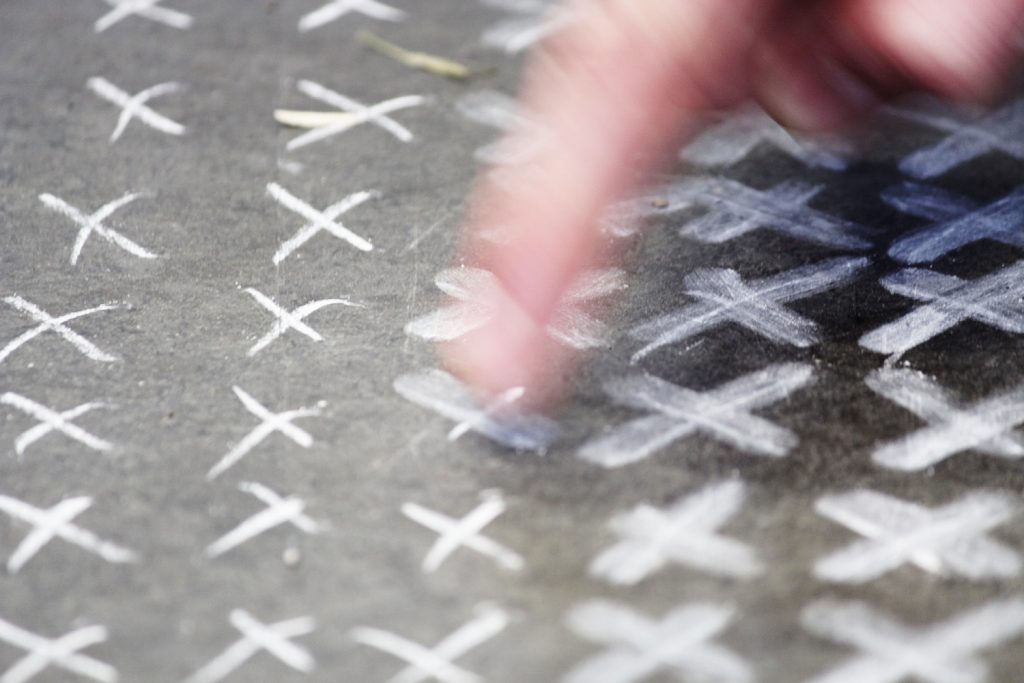 In the short time I was with the Prospectus artists it was evident that they were determined to make the most of their residency time together, even their travel time had an inspirational agenda as Anna had put together a CD featuring a mix of music and podcasts to provoke dialogue, and Natalie Parsley planned to lead a book group style discussion on the sci fi novella ‘The Word for World Is Forest’ by Ursula Le Guin.

The Prospectus project aspires to inform future workshops and seminars involving a wider circle of Somerset artists, a series of talks are already planned to take place in the autumn at the University Centre Somerset. If you are interested in following the groups progress during their time together recently and in the future do visit the dedicated website: PROSPECTUS

Now if you are wondering what prompted the feature image for this post, then the answer is this. The seagull landed heavily on the plastic roof at the close of their lunchtime discussion, informing me that I was with a group of people who ‘see’ when all commented on the defined silhouette and the wonderful colour of his translucent feet!

IMAGE of Isobel Adderley supplied by the artist