the general Germanic word for “animal” (as opposed to man),

but often restricted to “wild animal”

Would you accept an invitation or perhaps more an invocation from visual artist, animator and film-maker, Sean Harris to reconnect with your wild-deor-nes?

On Saturday evening, along with curious others, I accepted his invitation and followed the glowing, fiery footprints into the dimming light of All Saints Church in Langport… 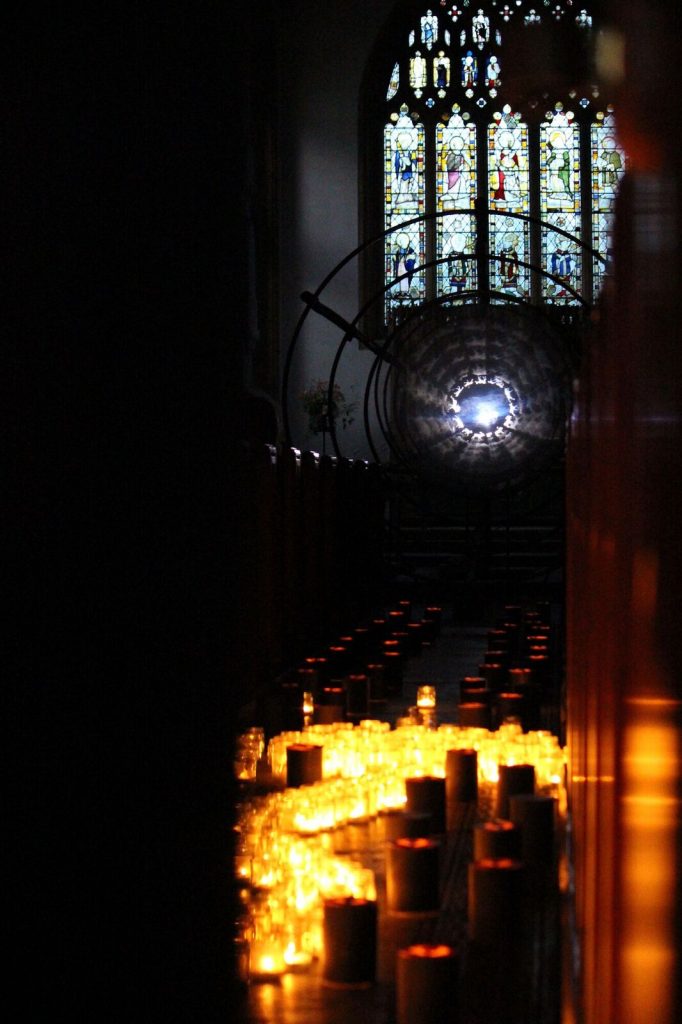 The event was part of the town’s current festival programme and was coordinated by Beccy Swaine of Somerset Art Works who have appointed Sean Harris to produce the next body of work for the Cranes and Communities commission, which in partnership with The Great Crane Project, has been running since 2010. Many of you may already be familiar with past projects and community workshops that produced the wonderful crane lanterns and Melanie Tomlinson’s colourful dioramas.

Sean is fascinated by the ‘need’ to reconnect ourselves to the landscape – re-imagining and connecting with our lost wilderness. So the rewilding of the Somerset Levels and the ambitious project of reintroducing the crane as part of that process seem the perfect habitat for him to explore and re-engage with our numb atavistic intuitions. Ambitious I know but there seems to be a current fascination with so many of our population living in urban environments for an affirming desire to know that there is still a wilderness out there, somewhere – whether we choose to visit it or not. But we need not to visit it as it would instantly lose its very definition of what we desire it to be.

His artistic practice also explores the idea that perhaps the vision of wilderness that we perceive never existed as a physical location, even to our prehistoric ancestors and that it has always been a state of mind. I suggested that perhaps this was a natural healthy fear of our darkest imaginations and kept us safe from the wild beasts, but he explained that he felt it should not instill fear but allow a sense of freedom. Our lives are so structured and formalised from our earliest years that we no longer allow ourselves the freedom of ‘dreamtime’ and its unanticipated discoveries. Our modern self-imposed constraints allow our societies to function, go unquestioned in our acceptance of them, but are rendering us unperceptive to ideas that may be considered way outside of the box, but just what we need to re-imagine our sense of place and creative potential.

Throughout the week leading up to Saturday’s installation a group of sixth form students from Huish Episcopi gained valuable work experience as studio artist assistants and produced the ‘foot print’ lanterns for Sean. Throughout their time together he encouraged them to think differently, away from the restrictions of exam expectations and a rigid syllabus – I hope that they found the time quite a revelation and freeing. 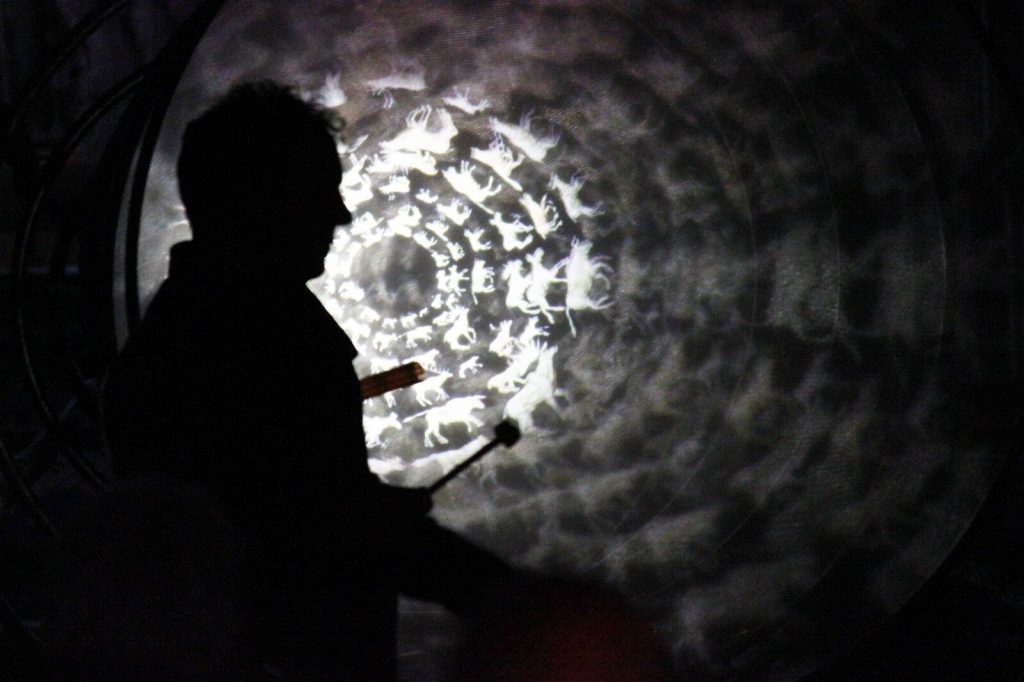 The stop frame animations that are the core result of Sean’s immersive research are projected via the most unusual rig that he has devised. Its cone like structure and multiple gauze screens add the perfect ghosting quality to his work. Viewed front end on you are presented with the film within the confines of its round screen, but step to the side and you catch the films echoes and multiple layers. It is as if has placed a huge visual tuning fork to the ancient bones that were on display and is broadcasting their wilderness memories.

The film was accompanied by a live soundtrack which heightened the evening’s atmosphere, the church’s arched ceiling echoed the framework of the rig beautifully and as the summer dusk descended the ghostly images grew in their intensity. 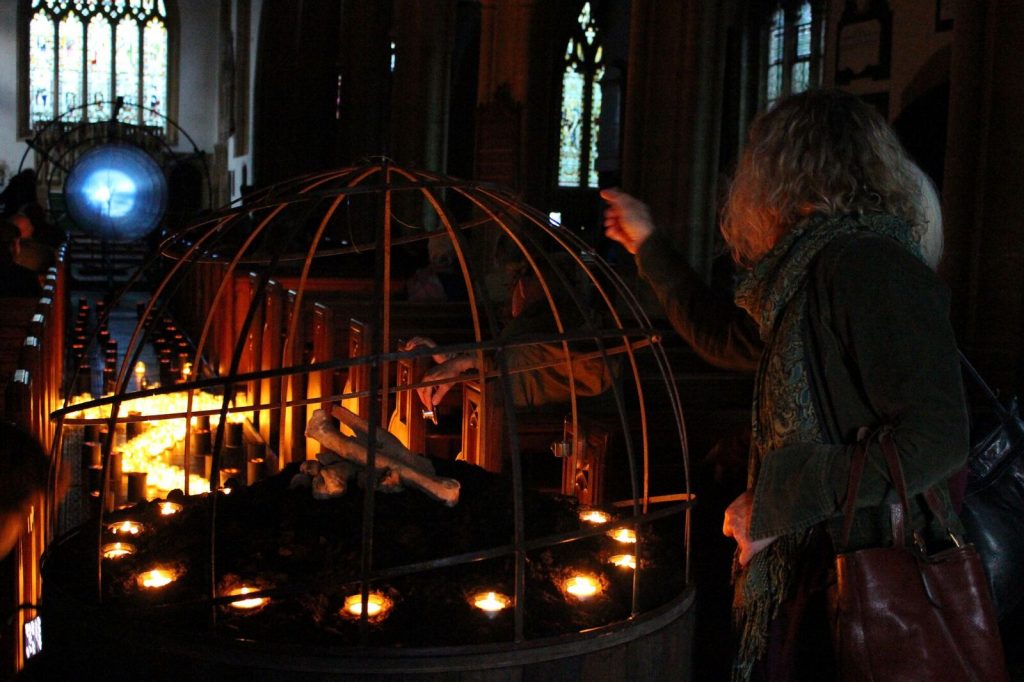 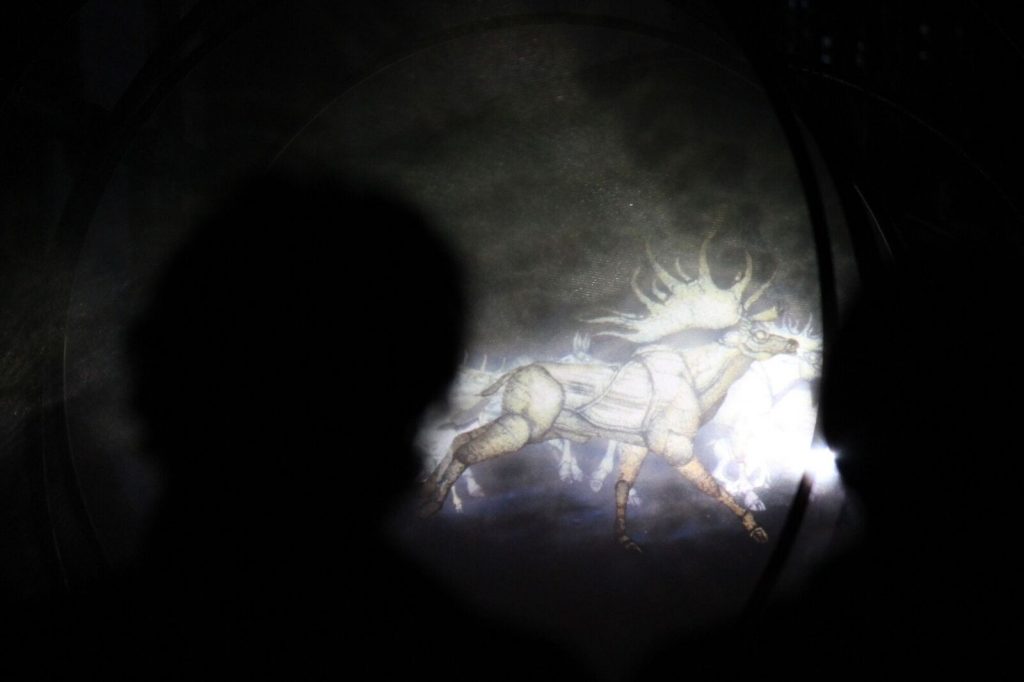 For the last six months Sean has been able to allow the Somerset levels to gently seep into his creative process, to monitor and record the changes, the positive impact and character that the cranes have wrought on the landscape and within the community. He would highly recommend a twilight walk ‘for a cornucopia of flying beings of all shapes and sizes…’ and applauds Somerset Art Works for allowing such an ‘indulgence’ and their complete faith and understanding that this will be the very strength that will inform the final animated journey that we are all invited to join.

This autumn the rig will be transported into the location that has inspired the film that is yet to be made and I am looking forward to seeing what images have been awakened by Sean’s ‘dreamtime’ in this transient, watery world.

A CELEBRATION OF CRANES