Yesterday I attended SAW’s Artist Development Day, facilitated by Zoe Li, Tim Martin and Anna Best. All attendees were given the opportunity to introduce their work and current creative practice and among the familiar faces there was a refreshing mix of new. Such occasions are always a great opportunity to connect with other artists working across the county and for those working in particularly isolated pockets a great reminder that they are not alone in their ambitions and goals. Some had travelled for over an hour to be part of the day’s proceedings highlighting the importance of SAW and its role in breaking down such obstacles when it comes to collaborating and promoting the arts in such a vast rural area.

Artist Anna Best explained that having moved from a very fulfilling career in London she had found it hard forming a similar network that would enable her to re – establish her role as an artist in a rural location. She had literally moved from one extreme of hectic city life to one of being surrounded by woods –  a move that many dream of, imagining endless hours of uninterrupted creativity. Yet at some point an artist requires an audience, surely that’s part of the deal and helps to define their role – even supports it financially.

There are of course times when art requires no audience. Anna explained that some of the projects she was commissioned to deliver in London had little or no first hand viewers due to their concept and location – something that would seem impossible in such a densely populated capital. The audience only becomes present when viewing the documentation of the project at a later date.

Artists also often require a diverse network of creative practitioners to deliver different elements within a project and a city naturally offers a pool of such talented people. Being self employed in a sparsely populated region forces many to multi task, to be the painter/printer/curator/publicist/web designer/photographer and accountant. Finding a team to help with such tasks takes time and meticulous planning when restricted by distance and transport issues. Meeting in a virtual world can fulfill some of these issues but meeting face to face can be far more rewarding and lead to unexpected results and new directions. 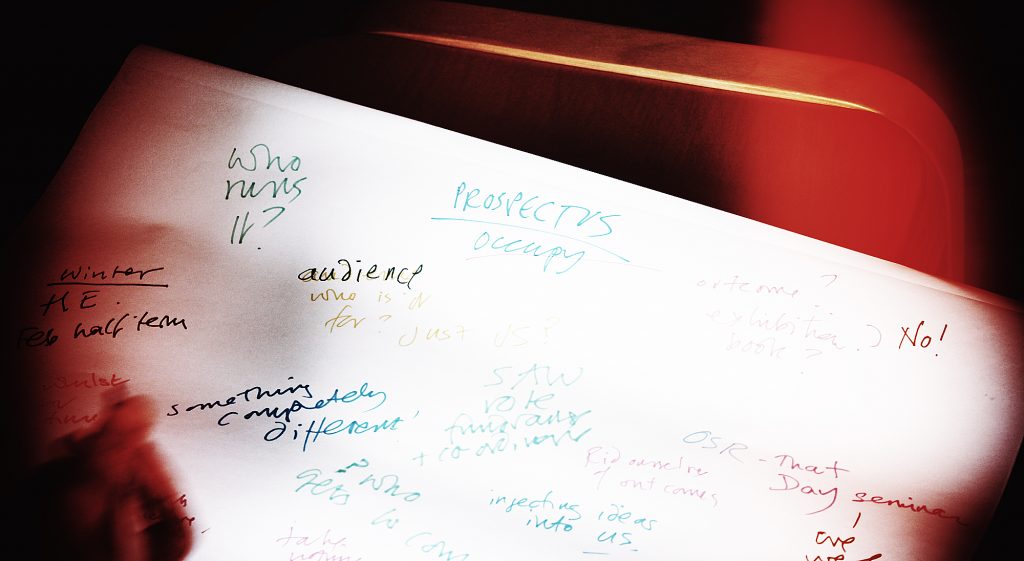 Anna has an intriguing proposal for SAW 2017 and part of the day’s proceedings was to share her ideas and discover how its members wanted to shape, cooperate and channel her impetus. Under the title of PROSPECTUS, Anna wishes to attract a cohort of artists to become students and teachers, a collective that occupies ‘closed’ creative spaces, one that breaks down the boundaries between disciplines, creating an imaginary art school that explores and evolves in the dark months of January and February – a self organised learning experience that may lead to an exhibition, may have no audience but will go where the artists involved find their lead. As you can imagine the discussion was lively, many keen to be involved on a possible residency, a chance to explore without restriction and keen to discover how collaborating with others would push them out of their creative comfort zones. The project is obviously still in the very early stages but I was not alone in sensing its wished for possibilities among those in the room and I hope that it attracts artists who are capable and prepared to be both facilitators and participators enabling PROSPECTUS to fulfill its true potential.

In past posts I have often written about the ‘quiet, introspective possibilities’ of the ‘dark months’ and the more Anna sparked the visualisation of the project I was reminded of an article written by Jeanette Winterson some years ago. The impression drawn sharper by the fact that on introducing her current artistic practice, instead of holding high a print or sculpture, Anna presented a humble bag of home grown salad.

These two snippets from Winterson echoed to me the thoughts behind seeding PROSPECTUS during the ‘dark time.’

‘I live in a wood in deep country, so inevitably light and dark keep their natural, non-city qualities for me, and I find myself responding to the changes in the light, and adjusting my ways from outdoors to indoors. I read more in the winter, write more, think more, sleep more. I don’t plan any of this – rather I don’t resist the seductions of darkness.’

‘When friends from London arrive, high on electric light, like hamsters on a 24/7 wheel, I slow them down by feeding them food with darkness sealed in it: deep red venison stewed in claret, carp from the bottom of the river, root vegetables grown in rich black earth.’

I hope that the artists who attended the Development Day found it rewarding and that it helped focus their practice. Those of you that are perhaps interested in being involved in PROSPECTUS but were not present, do not worry, there will be plenty more updates from SAW as the project develops. It promises to be a programme that is very much artist led, which is, as many of you are aware the foundation of Somerset Art Works – lets see where you/they lead it and SAW as a whole.

Anna Best is also currently offering residencies at her home and studio in Dorset, do take a look at her website for more details where you will also find an extensive cabinet containing an archive of her past projects.