In my last post I asked whether artists migrated or hibernated and it has become apparent that since then I have done both. I must admit that I hadn’t really planned the hibernation part, that was enforced by our British winter striking me down after returning from a month of delicious heat in New Zealand. So finally I am emerging and like many of you relishing in the spring light and anticipating the lighter evenings that await us.

I thought I would share some of my New Zealand art encounters with you, particularly my experiences in Christchurch where it seemed most evident, raw, energetic and necessary.

Visit any urban environment and you will find large scale murals adorning its streets and yet in Christchurch there was a freshness and vitality that spoke volumes. Here is a community positively reclaiming its neighbourhood after the devastating quake of 2011. They have not just waited for the bureaucrats to take action, but have made personal and communal ‘marks’ to salvage and inject an identity back into their streets where local landmarks no longer exist.

Five years on and there are still buildings awaiting the wrecking ball. We witnessed one in the process of being demolished as the walls, like pages from a sketch book, revealed room upon room of graffiti art. Other buildings still bare witness to the rescue teams, as one by one, each property was declared ‘clear’ by the date spray painted onto its fascia – tell tale traces are everywhere.

Walking around the city you had to remind yourself that this landscape had been formed by a natural disaster not war. The Kaiser Wilhelm Memorial Church in Berlin came to mind when I saw the remains of Christchurch’s Cathedral but this has not been left as a reminder of the atrocities of war, but simply that its future has yet to be decided, do you rebuild as was or grasp the opportunity to create the new. Despite the negativity of its ruins there is a positively that outweighs this shadow, the city is full of workmen and the road cones which initially signalled damage now cordon off progress and regeneration.

Residents enthusiastically welcome each familiar landmark building as it reopens its doors and in December it was The Christchurch Art Gallery that achieved that goal. My youngest son dragged his heels when we explained where we were planning to go that day and yet I think he was the one that had the most interactive fun from the whole experience. He loved The Beast Room and was enthralled by Connie Samaras’ four minute film of a seal taking the most huge breath before diving under the surface. He also had a great time exploring the scale of his shadows created by Kentaro Yamada’s light sculpture. 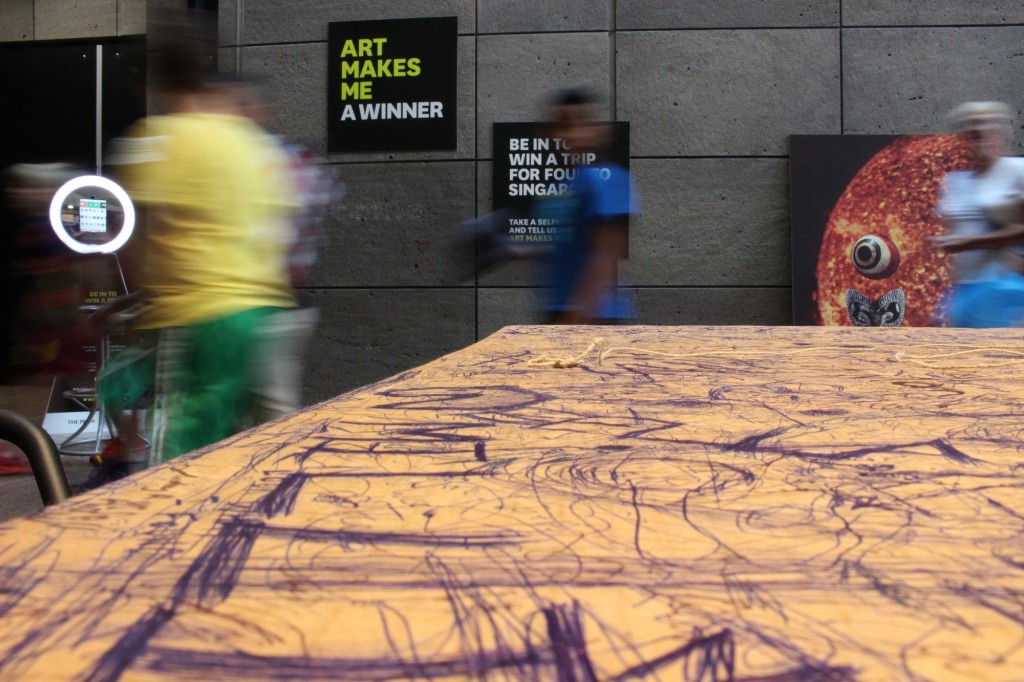 Being in the confines of the gallery one could easily forget the devastation that had occurred outside its windows, a welcome respite for locals emotionally unsettled by the quake, and yet a gallery has an obligation to question and reflect with an artist’s eye how we react to a landscape in flux. Perhaps the current exhibition, Precarious Balance, at The Centre of Contemporary Art which was due to open just after we left best tackles this issue. I tentatively knocked on the glass doors of this gallery as SAW’s Zoe Li had said that I should say ‘Hi’ to Paula Orrell, the gallery’s new director, who before heading out to New Zealand had sat on the SAW selection panel for the Momentum Open Call in early 2015. Now being British I tend to usually make appointments before I head off anywhere but being on the road and off grid I didn’t really know when I would rock up in Christchurch – but hey this is New Zealand they are far more laid back and do tend to just drop in!

I caught Paula just as she was heading off to have a late lunch, but she said I was welcome to have a look around. With a week before opening the gallery was in a state of organised disarray, most of the building work and decorating complete the floor was strewn with art work in and out of pallets waiting to be assembled and hung. I can only feel for Paula as literally a day after they reopened another quake hit the city. No one was hurt, the precariously balanced art works may have faltered but the building remained tall and robust after all its renovations.

When we left Christchurch, it felt strong, forward thinking and defiant in re-energising its cultural heritage – a city keen to remember that it had a pre quake history and eager that the quakes will not continue to shape its global identity. I don’t think we felt unsettled as a family during our visit, although in hindsight I do think my youngest son felt a little insecure, I am sure if we had been there a few days later to feel the latest tremor I may have questioned our being there, anyone’s being there, but then humans are skilled at shutting out certain dangers and for the residents of Christchurch who choose or have no choice but to stay lets hope the benefits far outweigh the underlying dangers.

Christopher caught many of his experiences with words as is his artistic way and I shall leave you with his poetic response to Christchurch: