Contains Art in Watchet has just celebrated it’s second birthday. I remember writing about its opening day, admiring the energy of the creatives who had pulled it together to open this new arts venue in West Somerset but noting that it’s all well and good when the sun shines, but maintaining such enthusiasm and public interest can be exhausting particularly during the winter months. Under the leadership of Naomi Griffith and Jessica Griffith Prendergrast, the team of directors and artists have successfully sustained the momentum of this artistic roller coaster with an ever changing programme of exhibitions, talks and family events. Their latest and probably proudest step to date is that into the world of publishing.

Contains Art aim is to publish a series of beautifully produced books, targeted at collectors with each title to be numbered and stamped. It seemed instinctive that the first title should have a strong literary connection with Watchet and so the team naturally chose Samuel Taylor Coleridge’s Rime of the Ancient Mariner – considered to be one of the greatest poems in the English language. Earlier this year artists were invited to submit illustrations in response to this epic poem. It was then the task of the panel to select the final 24 artists who would be published, amongst them were the project’s curator Lee C Wallick, Tom Mayberry, Chief Executive of the South West Heritage Trust and Tracey Roberts of ARTLife. It was no easy task, at one point they were worried they would be inundated with images of the albatross, then there was a point when they thought they wouldn’t receive any! The final images chosen needed to reflect the full spectrum of the text and be of a standard worthy of the book they visualised. I can safely say that all came to fruition and the book was launched on the 17th June to a very appreciative audience. 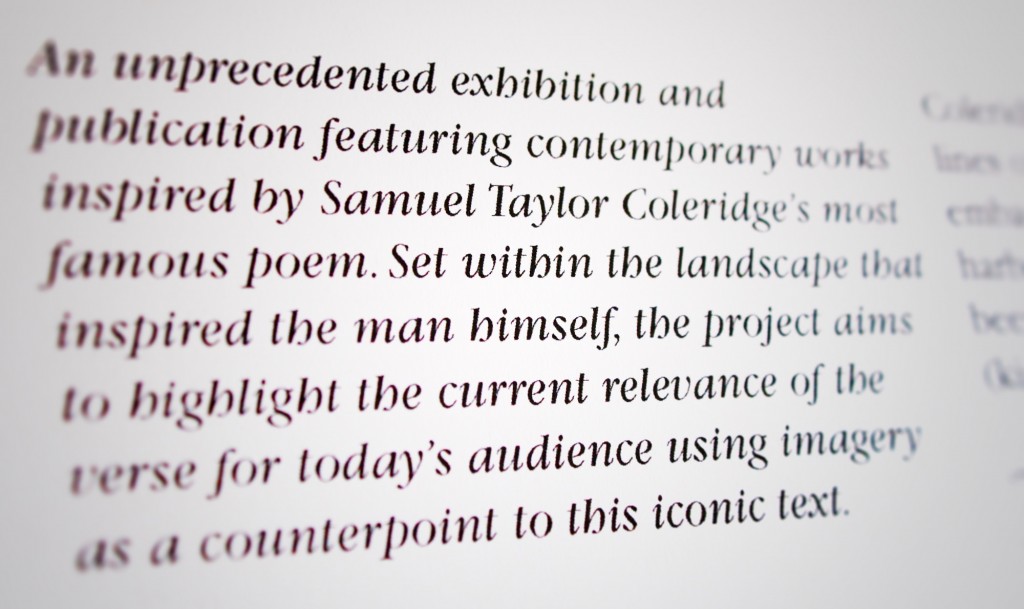 An exhibition of all the artwork that features within The Rime of the Ancient Mariner is currently open in Watchet until Sunday 12th July. Not only can you buy copies of the book priced at £12.00, you may also purchase original artworks and prints. All the books have been stamped and numbered, with a limited run of 700. However certain numbers are unavailable to purchase as each artist is to be presented with the numbered edition that correlates with the page number their work appears on (I am looking forward to owning No 46). Half of the 24 artists selected, are members of Somerset Art Works and many will be exhibiting at various venues during the forthcoming festival in October, amongst them are the Davey family, Toni, Andy and Leo, Jenny Graham, Vanessa Clegg, Pennie Elfick and Bronwen Bradshaw.

Sustaining it’s artistic momentum the Contains Art Gallery will be the venue for an exhibition entitled Magic of Trees during SAW 2015. Curated by Andy Davey the artists to exhibit have been invited to make new work dedicated to the tree – its physiognomy, its gestures, its beauty, its aura and its vulnerability. Alongside familiar SAW names the exhibition will also feature the Arborealist group including Tim Craven, Fiona McIntyre, Fiona Hingston, Celia de Serra and Howard Phipps, all of whom recently exhibited at the RWA in Bristol. For a full list of forthcoming events at the shipping containers do visit their website.

Artists are already speculating what the next title in the Contains Art series maybe, will they keep with the literary heritage of West Somerset or take us all by surprise. One thing I am certain is that following the success of this first publication many more artists will wish to be involved, making an even trickier although enjoyable task for the panel making the final selection.

All images taken by Davina Jelley