Seeking sparks of inspiration is tricky at times, the more you dwell, the dimmer they seem to burn. Author’s do not wish to become too au fait with regular bouts of writers’ block and artists likewise. So where and how is inspiration to create born? The answers are of course as varied and eclectic as the individuals we all are, and yet there are always cross over points.

Unsure of what to write for this post I set out for a walk, not with the intent that I must come back with a firm idea, more the realisation that I needed to make the most of the wonderful spring weather and exercise not just my legs but the dog’s also. I could have easily stayed in, starred blankly at a computer screen awaiting the words to materialise.

Walking has always been viewed as a great catalyst for writers, artists and poets and is once again enjoying a contemporary revival with creatives keen to tap into this thought provoking stimulus, producing work for a public hungry to reconnect with landscape and nature as not all of us are in a position to go wild rambling and so need to escape through the steady gaze and footfall of others.

We may not all return from a walk having written some epic poem, but the art and momentum of walking allows our minds to relax, ‘drift think’ and hush our everyday overload.

My outing was rewarded on hearing the year’s first distinctive call of the cuckoo – the bird that makes our spring so very British and yet is quite the usurper. The sound uplifted my spirits and as I walked ideas surfaced….

I found myself thinking about certain posts that had appeared via social media, artists bemoaning that they had been copied, outraged that their creative style and hard sort inspiration had been stolen by another claiming to be the originator. I can understand their immediate frustration but I could not agree with how they then choose to post links to the ‘culprit’s’ web page, which then resulted in others taking on the battle, my heart went out to the accused – this was not a professional way to tackle the situation. If the artist felt so strongly that a true infringement of copyright had been crossed then a private e mail or phone call would have sufficed not this public trolling.

As an artist or designer you always need to say one step ahead, yes people do copy – not everyone is capable of that initial spark and is anything truly original anymore? It is very rare that they are, for a short time they may stand alone and if they capture the public emotion then variations of the theme steadily occur and reoccur with certain aspects, a particular colour, image or medium becoming all the rage until the next artistic must have.

Artists are expected to view copying as a form of flattery, an indication that their work is admired. It also highlights that their work has reached a wider audience and surely by the time that particular painting may have been copied the work of it’s originator has progressed and evolved to another stage for surely the copier is always playing catch up. However copying does have its place, a friend of mine laments that she wishes to start painting once more but has no inspiration. She finds herself unable to create and develop her own style and yet she is an accomplished artist who has had a successful career painting copies of famous artworks for film and TV.

I recently submitted a collage to the Contains Art Rime of the Ancient Mariner project. Whilst in the creative process I made a point of not seeking out contemporary images of the poem, not wishing  them to inadvertently influence my final design, I wanted Coleridge’s words to be my source. Trained as a textile designer the of use of descriptive colour drew me and so I set about highlighting the frequency of colours within this dark tale that is so strongly associated with the black and white illustrations of Gustave Dore and Mervyn Peake.

After submitting my artwork I received an email from the co-ordinator of the project Lee Wallick and attached were some very familiar looking images asking if I had seen this particular artist’s work before? The answer was an astonished ‘No!’

The work in question was by Jaz Parkinson for she too has created colour frequency breakdowns of novels. Now if she came across my piece for Rime of the Ancient Mariner, she could easily point the finger and say I had blatantly copied her work. I see this artistic coincidence as highlighting that nothing is original anymore, we do not create in a sealed bubble, our thoughts, ideas, sources of inspiration constantly cross with others. 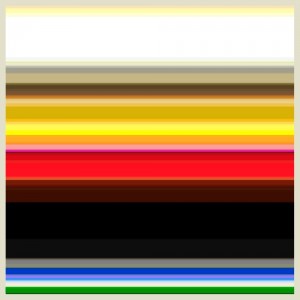 Admittedly it is particularly galling for a maker or designer when large corporations are clearly guilty of stealing their ideas and concepts, making big money from their creativity. If you ever find yourself in this situation there are organisations like ACID: Anti Copying In Design to advise and help fight your case.

Is copying a form of flattery? It maybe unintentional or innocently executed, at other times considered darkly calculated to those that are its victims. View it as the spark that pushes one creatively forward, aim to rise above it and certainly do not accuse in public.  The majority of the public follow an artist’s online presence because they admire their work and resonate with the artist’s unique take on the world, they will spot a weak copy if they encounter one and are not interested in petty artistic insecurities and backbiting. How an artist conducts their behaviour within the realms of social media can affect their future opportunities and if positive outcomes are sought then the artist’s profile also needs to be positive and professional.